It’s so simple to be happy, but it’s difficult to be simple. But Aussie couple Mark and Cathy Delaney, and their two children, Tom and Oscar have definitely disproved what Rabindranath Tagore once said.

For the Brisbane-based couple, who moved to Barapullah (Delhi) years ago and now call a modest one-room accommodation home, simplicity is a way of life. Mark and Tom’s book, Low Carbon and Loving It is a testament to that. 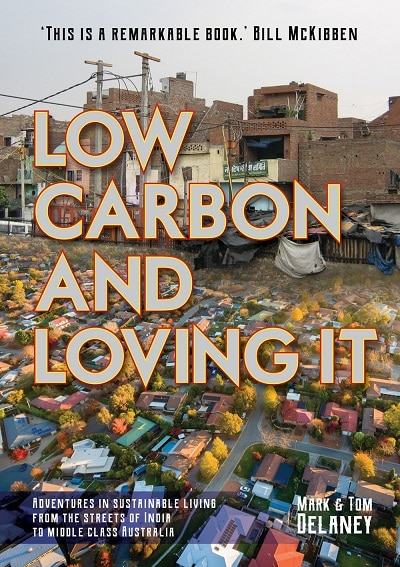 Based on sustainable living, their observation of Australian lifestyle and personal lived experiences in Indian slums, the book is a collection of their unique perspectives. The Delaneys hope that it would contribute in some way to reverse the devastating impact of climate change. Only in their case, they practise what they preach.

“We share a fairly small room with one fan, one light, and a few electrical devices using little electricity. As do our neighbours,” says Tom. “Australians consume a lot more, in large houses with air conditioning and running pumps for their pools. Our poor neighbourhood has made me acutely aware of how wasteful we are in Australian society.”

According to them, an average Australian consumes 23 tonnes CO2e to the Indian normal of 2.3 tonnes. The father and son were shocked when they visited in 2014. “People were still leading high carbon lives. We wanted to alert people to the gravity of the situation,” says Mark.

“We need to come to a sensible middle ground,” adds Tom. “High carbon luxuries in the west like car, meat consumption, flying that are seen as necessities, actually aren’t. We don’t want to romanticise poverty yet we note our neighbours remain remarkably content even though they don’t have all the stuff we have there.” 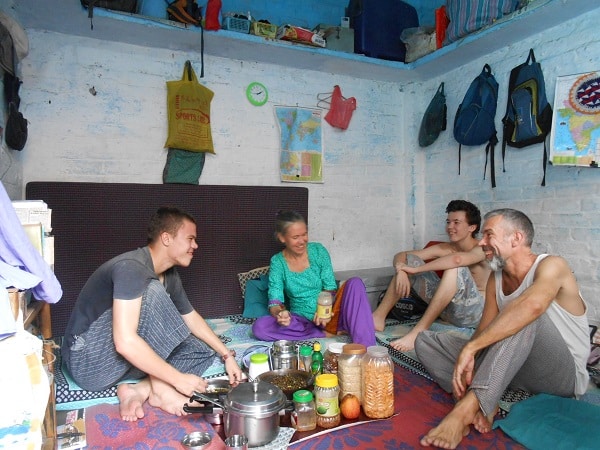 Their book weaves in their Indian storyline, lays out the problem of climate change and offers practical recommendations on reducing carbon footprint in six areas – the stuff we buy, diet, local travel, long-distance travel, electricity consumption and accommodation.

Their story begs the question: How did all this happen? “Cathy and I had this moment of epiphany during our university years: life isn’t all about getting the big job and the big salary and feathering your own nest,” says Mark Delaney. “It’s more about trying to serve and care for other people, taking a broader view of society.”

The Australian-born couple’s decisions were in tandem even before they met. After completing his legal studies, Mark decided not to be a lawyer, he felt it was a hectic path more focused on money than people. Cathy opted to work with homeless kids in Brisbane, after a degree in Mathematics and Computer Science.

With similar mindsets and Christian faith strengthening their resolve, the pair left a comfortable existence in Brisbane to move countries and into a tiny one-room dwelling in Barapullah, Delhi, where they lived, birthed and raised their sons Tom, 21, and Oscar, 16.

It was an immersive experience from the word go. “We were sensitive about not being the foreign expatriate know-it-alls, barging in to fix problems without understanding the situation,” says Mark. “So we first spoke to Indian friends and colleagues, learnt Hindi to be able to speak to ordinary Indians, committed to living here for a long period, and we have always worked with local organisations.”

Mark used his degree to help the disadvantaged get various entitlements from the Indian government. Moving from an advanced country to a developing one was a big adjustment, but it wasn’t too bad. “As Aussies, we have grown up camping so our lifestyle here is a lot like permanent caravanning. Small space, be tidy, walk to the toilet block, bring water,” says Mark.

The real alterations were in always appearing different, adapting to culture and learning Hindi. “For an introvert like me, it was hard dealing with the sheer number of people who approached us wanting to talk, saying Angrez, angrez kahan se aaye hain?” he laughs.

Cathy had her own path to chart as a white-skinned woman and being perceived as morally open-minded. “I was 30 when I first arrived and had a lot of men staring and touching, those kind of things,” she recalls. “There was a lot of adjusting in the early days, a very different cultural setting to get used to. Simple, external things like my way of dressing, how quickly I walk, who walks in front.”

Her Muslim neighbourhood necessitated a vital style change. “Early on, I realised that being viewed as someone with moral standards made a big difference to my life,” she confesses. “I almost exclusively wear salwar-kameez and a dupatta, and cover my head outside.”

She won brownie points for sewing and cooking. “It would be different if I was hopeless at cooking,” she jokes. “I really enjoyed traditional handcrafts of women, it gave me social credit. In those ways I could fit in, and in other ways I couldn’t.” 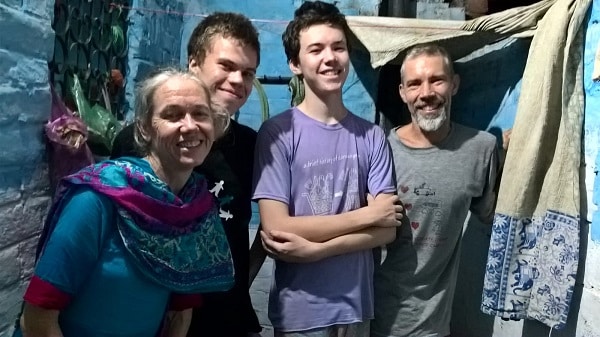 In contrast, Tom’s childhood experiences were seamless and filled with memories of classic Indian games like Ludo and cricket. “Children are quite good at looking past differences in skin colour,” he says. “I was conscious of being white and my friends being brown but differences weren’t that deeply ingrained since I’ve grown up in this environment and am fluent in Hindi.”

Yet the cognizance of stark disparities in their lives still existed. “Though we lived quite simply, I’ve never been hungry any day in my life whereas many of my neighbours have,” Tom says. “I had nice toys to play with, they didn’t. It does make a profound impact when your friends don’t have enough to eat sometimes.”

“When Tom was 10 or 12, he felt after visiting friends in our neighbourhood that our house was so big, but after visiting our American friends in another suburb, that it was so small,” Cathy recounts. “A simple observation on how relative life is, you interpret things differently depending on who you hang out with. We grew up thinking life in Australia is normal and our kids have grown up thinking it’s not.”

Do they feel Australian or Indian? “We largely feel Australian although back home, we don’t,” Cathy says. “We are also less and less nationalist, I guess. These labels seem silly, we see issues in a different light now.”

Mark admits he thought they would head back to Australia for the kids after a few years, “be normal, get a job and buy a house”. Then the couple realised that raising them in a poor neighbourhood was actually a very good parenting setting. “Our children are really grateful for the things they have since they see contrasts with friends who have far less. They hold a very broad and nuanced perspective on life,” says Mark.

“They weren’t deprived,” clarifies Cathy. “Everything we felt was important for our children to have, they have had. We spent lots of time with them, always had wonderful family holidays, good friends, met grandparents and relatives back home every few years.”

For the most part, different friends and family members helped the Delaneys survive with $20, $50 or $100 dollars a month. “We live frugally, it doesn’t take many dollars to live in a basti. Sometimes, we qualify for benefits from the Australian government, at times we worked in Australia and saved money,” Cathy shares.

Though the family had financial requests from neighbours, and organised funds for them, they kept the footing equal. “We always need to find ways of mutuality. It’s important to recognise that living here we receive a lot from people in culture and spirit,” says Tom.

Two decades on, they are all still stationed in India and he is carrying forward his parents’ legacy of service working with a literacy organisation, Devi Sansthaan. Mark points out, “Desire, consume, repeat is the mantra of our capitalist society. It creates artificial desires, saying this product will make you happy. That is a fundamental lie. Happiness does not come from a new product or feature. Happiness comes from relationships, nature and from living a peaceful life.”