Home Front Page News The making and mastering of myths

Many of us are familiar with Girish Karnad, the accomplished actor and film director. In a career spanning 4 decades, Karnad has acted in innumerable films across languages such as Kannada, Hindi, Tamil, Malayalam and Telugu.

But it is as a playwright that Karnad is most acclaimed. He has written fourteen plays in Kannada, his adopted language, including Yayati, Tughlaq, Nagamandala, Hayavadana, Agni Mattu Male and Taledanda. They have won him some of India’s top awards and honours including the Padma Bhushan and the Padma Shri, the Jnanpith for Kannada in 1998, amongst several others.

This multi-faceted writer was in Sydney recently to participate in the Australia India Literatures International Forum (AILIF). He was part of a panel of four writers discussing ‘Myth and the Writer’ on September 5 at the State Library of NSW.

Girish Karnad pioneered the use of myth and folklore in Indian theatre, and many of his plays make extensive use of myths to highlight social ills. A strident critic of the Hindutva movement and the rise of religious fundamentalism in India, Karnad’s speech focused on the misuse of myths for political purposes by these agencies.

The audience hung onto his every word, while he briefly outlined the development of religion and myth in India from the Vedic ages to the Bhakti movement. “Myth was the background to an enormous tragedy that took place in 1992,” he said, referring to the demolition of Babri Masjid. Describing the events leading up to this tragic episode, Karnad elaborated saying, “This is a perfect example of how a mythical subject is taken, politicized and turned into a political event… how Rama a mythical figure was transformed into a political figure.”

Karnad spoke of the changes this event had wrought, how it was now acceptable for respectable journalists and writers to engage in anti-Muslim writing in the mainstream media. Also, people now felt they had a right to break the law in order to uphold their own personal beliefs and myths.

On a lighter note the multi-faceted writer stated, “Since I have to talk about myself, I will do so for two minutes”, which brought a bout of laughter from the audience. He talked of Bernard Shaw being an overwhelming influence on Indian theatre for many years. But during the ‘60s when writers started looking for further inspiration, they turned to Indian myths and used them to express their anguish and passion. “That is how I wrote my play Yayati,” said Karnad.

The eminent writer said he chose to focus on this issue rather than his own writing, as over the years, the use of myths has reduced to insignificance in Indian writing and we are instead starting to witness its increasing use in politics.

Next on the podium was Subash Jaireth, an Indian writer based in Canberra. The author of three books of poetry and a work of fiction, Jaireth joked about how he was a “writer of very minor significance”, compared to Karnad who has himself been turned into a mythical figure.

He spoke about the importance of myths and their reality. “The epics such as Ramayana and Mahabharata are sort of older versions of Wikipedia. They are stories built upon stories upon stories. So there are always gaps and cleaves which provide the writer an entry point, where they can enter and cull out pearls,” he noted.

The author talked about his own experiences with the world of myths, reading from his first book of poetry about Yashodhara, the wife of Buddha and his recent book To Silence, a collection of three fictional autobiographies.

The third writer of the day Malcolm Knox is an award winning Australian writer and journalist. A former literary editor of the Sydney Morning Herald, he has won several awards including the Ned Kelly Award for Crime Writing, the Colin Roderick Award and the Walkley Award for journalism. His works of fiction include Jamaica, A Private Man and Summerland.  His most recent work called The Life is about a surfing legend called DK, past his prime, who is now overweight and living with his mother. 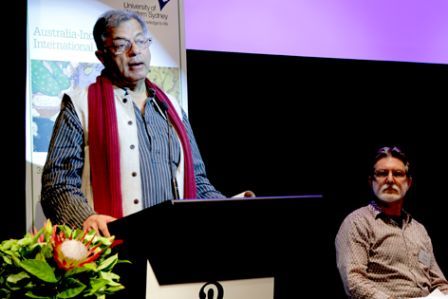 The sharp contrast between the focus of the first two speakers and the third was almost comical. While the Indian writers focused on the abundance of legends in Indian culture, their use and misuse, Knox looked at the lack of myths in Australian culture. “Australians have to get their myths where they can find them – they have to be magpies”.

According to him, the surfing world offers an opportunity for myth creation.  Surfers are always searching for that elusive perfection referred to as the ‘mythical left’ and they create “story upon story” about surfing champions, elevating them to the status of mythical figures. Knox talked about the humorous side of surfer terminology, peppered with terms like ‘epic’, ‘legend’, ‘legendary’, ‘the stuff of legend’, all referring to that great surfing experience.

Knox took the example of a real-life surfer Michael Peterson, on whom his main character DK is based, who was transformed into a figure of legend.  The wealth of stories about the surfer was compiled into a biography; but his biographer Sean Doherty had to admit that although many of them were embroidered, they were too good to leave out of his biography. This is a perfect example of how communities create their myths through storytelling.

The last speaker Nicholas Jose is author of seven novels including his most recent, The Red Thread, and two collections of short stories. He is Professor of English and Creative Writing at the University of Adelaide. Jose spoke about many aspects of myth, including the differences in myths across different cultures and the experience of communicating across the differences.

“The element of myth comes from one culture to another, a powerful borrowing that must be handled with care. We need to experience it from the inside not as something recorded by an outsider … but as something made real by objects in the story, something lived and living. Stories and images that speak across this space have a mysterious capacity to change and shift even as they retain their core energy,” he stated.

The questions raised by the audience ranged from the unifying nature of myths to the existence of countries without myths. The panellists each brought in their own perspectives, reflective of the vast cultural differences between countries. But the discussion also highlighted the unifying role of the writer across cultures and brought into focus the importance of myths in writing.