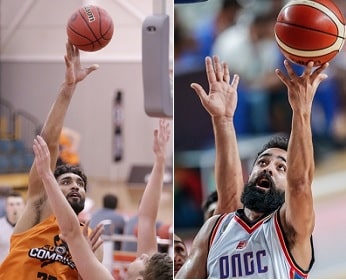 Australian basketball fans are set to cheer on a former Indian captain as well as Team India’s current skipper, after a pair of historic signings by NBL clubs Adelaide 36ers and Sydney Kings. While the 36ers have, in conjunction with the Dream Basketball Academy, signed former Indian captain Vishesh Bhriguvanshi on a one-year training contract, Indian skipper Amritpal Singh has been selected as a member of the 11-man Sydney Kings squad, after his impressive recent outing with the Sydney Kings Invitational Team in China. The duo are the first Indian players ever signed by an Australian basketball outfit, forming part of a move by both clubs to build up their respective fan bases in the Indian community, both domestically and abroad. Indian Link recently caught up with Vishesh and Amritpal to hear their thoughts ahead of a historic summer of basketball.

Standing at 7’0” and 116 kilograms, it’s easy to assume that Singh was born to play basketball; but it’s a relatively new foray for the 26 year-old, whose humble beginnings cast his meteoric rise in even more an astonishing light. Born to a family of humble vegetable farmers, Singh grew up helping his father plough rice fields in Ganna Pind, a small rural village in Punjab with just over 2000 inhabitants. More than 10 km away from the nearest train station, Singh – a kabaddi player who didn’t know what basketball was until the age of 18 – seemed destined to follow in his father’s agricultural footsteps. But after being introduced to basketball by his uncle in 2009, the towering center found himself representing India at the Asian basketball championships just two years later at the age of 20, and is now one of the most prolific and dangerous basketballers in the region.
Sydney Kings Head Coach, and Australian basketball legend Andrew Gaze, spoke glowingly of Singh’s pedigree. “Amritpal was a very strong contributor to the Kings off-season program, particularly during our invitational tour to China,” said Gaze. “His rebounding was a major factor that allowed us to win the Suzhou event, and he also picked up our overall playing philosophies and schemes quite quickly,” Gaze said.

Amritpal himself was modest. “Playing with the Sydney Kings, my game will improve more,” he said. “I’m very excited because it’s a big opportunity for me and a lot of Indian basketball players are looking up to me. I want to do my best in my first season with the Kings and I hope the Indians will support me and the team”.
One man who knows Singh better than most is his India teammate, Vishesh Bhriguvanshi. “It’s a big thing that [Singh] got selected for the Kings,” says Bhriguvanshi. “He performed very well in the China invitational tournament. He’s a nice guy and a good player. He’s one of the big 3 in the Indian national team, and it’s definitely great that he’ll play in Australia – he’ll learn so many things and he’ll help the national team more.” It’s a sentiment Singh reciprocates, noting fondly the time he and Bhriguvanshi have spent playing together in the domestic club scene.
Bhriguvanshi’s journey to the top is no less remarkable: at a relatively slight (by basketball’s standards) 6’4”, the 25-year-old shooting guard from Varanasi first started playing basketball with his elder brother at the age of 12. Within a year, he was representing his district and state; by 17, he was already a member of the national side; and by 19, Bhriguvanshi was named captain of the Indian team. Having been born to a lecturer and a school principal, Bhriguvanshi’s future, like Singh’s, could easily have been vastly different if not for a few quirks of fate.

Bhriguvanshi was initially introduced to the 36ers by the Dream Basketball Academy, which is designed to allow young, elite basketballers to transition from high school to the NBL and ultimately to the NBA, under the guidance of some of the best coaches and trainers in the business, including Dream Academy managing director and co-founder Raheim Brown, a former professional basketballer with experience in several premier basketball leagues around the world. Brown’s biggest success story with the Dream Academy to date is the development of US sensation Terrance Ferguson, who in 2016 skipped the traditional college pathway to the NBA, instead opting to spend a year with the Dream Academy and the 36ers, before being picked up by the Oklahoma Thunder in the 2017 NBA draft.
Speaking about his journey to Australia and his upcoming time at the Dream Academy, Bhriguvanshi is not short of excitement. “The NBL is one of the world’s biggest leagues after the NBA,” he said. “Every player has a dream to play for a reputed league some day, and so it was my dream. Representing the nation is very different feeling, and I am definitely proud of that, but playing in a league like this has always been my dream and that is what keeps me motivated.”
“It means a lot because I’ll come to learn so many new things and Raheim will train me,” he added. “It’s a really big thing for me and it was very big news [in India]. I was like, ‘Really?’, and Raheim said, ‘Definitely, we’ll train you the same way we trained Terrance and try to get you in the NBA’. I’ll try to give it my 100% – every basketball player’s dream is to play in the NBA, and especially coming from a country like India, it’s a very big dream for me.”

Both the 36ers and the Kings are intent on growing the fledgling relationship between their clubs and fans within the Indian community. Sydney Kings Managing Director Jeff Van Groningen noted the significance of Singh’s signing, saying “We take our responsibility as a member of the global basketball community very seriously and endorse the NBL’s focus on ‘bridge-building’ with those that share an interest and passion for our great game both in India and within the Indian community here in Australia. We are excited at what Amritpal can contribute to the Kings as a strong, rebounding big man and we look forward to contributing to his rising career. “
The Dream Academy, meanwhile, is also excited to share Australian and Indian cultures with Bhriguvanshi, noting its ultimate goal of putting Bhriguvanshi through a workout in front of NBA teams or the NBA development league. “With his competitive spirit and style of play on the court and his humble but strong personality off the court, he is a great addition for us,” Brown said. “We look forward to this new relationship, not only with Vishesh, but with the whole of India. He will represent the Dream Academy and the Adelaide 36ers proudly for his country and himself.”
- Advertisement -
Share
WhatsApp
Facebook
Twitter
Linkedin
Previous articleCitizen action or vigilantism?
Next articleDiwali contest for Blacktown homes