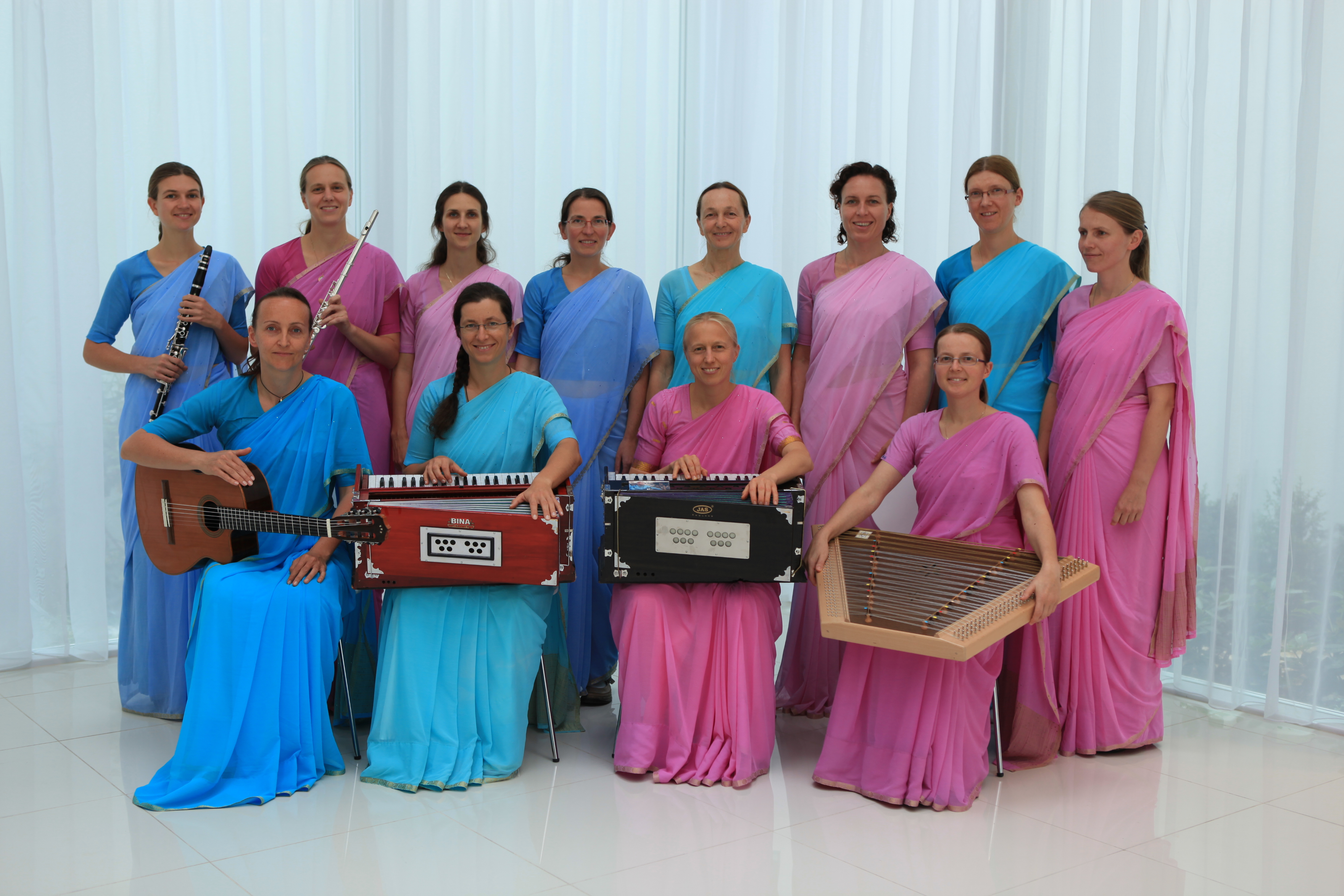 It has been a busy schedule for the predominantly Czech ensemble Agnikana’s Group for 2015. They finished a four-city tour of Japan in April where they began by playing at Kamakura, home of the famous Lord Buddha statue, and concluded in Nagano, a former Winter Olympic city. Additionally they have just finished touring their way across Australia and New Zealand performing free concerts in Perth, Adelaide, Canberra, Melbourne and Auckland. The up to sixteen female members play a whole gamut of instruments, including harmonium, guitar and wooden flutes, santur and glockenspiel and sing in English and Bengali.

This group was founded by Zlin musician Agnikana Senkyrova in 1997 and their music has been described as soulful and ethereal – mixing angelic voices with their acoustic instrumental arrangements. It is worth having a listen to them online if you need some uplifting through the day. “While singing,” Agnikana said, “we attempt to create and maintain an atmosphere of harmony, peace, purity and soulfulness so that the listener can draw on as many meditative qualities from the songs as possible and at the same time, appreciate the melodies.”

While Agnikana hails from the Czech Republic, her group members come from Slovakia, Canada, Austria and Switzerland. “What brings us together and gives us inspiration and strength is not just the music itself, but the pursuit of truth through meditation. And this meditation is an integral part of our lives.”

The musicians have all learnt meditation from Indian teacher Sri Chinmoy and the all-female ensemble is entirely devoted to performing his music, drawing on the 16,000 songs he composed.

“Music is the universal language,” he once said. “We do not have to learn any particular language to communicate with others if we can play soulful music. Soulful music is next to meditation, and it carries the beauty and fragrance of silence…”

Their love of music has taken Agnikana’s Group to some wonderful places: Iceland, Mongolia, Korea, Vietnam, Italy and France to name a few. In the 18 years they have been together they have released four CDs and completed numerous concerts (always free). They perform because of the peace they feel when doing so and its ability to impart the same feeling to the audience. 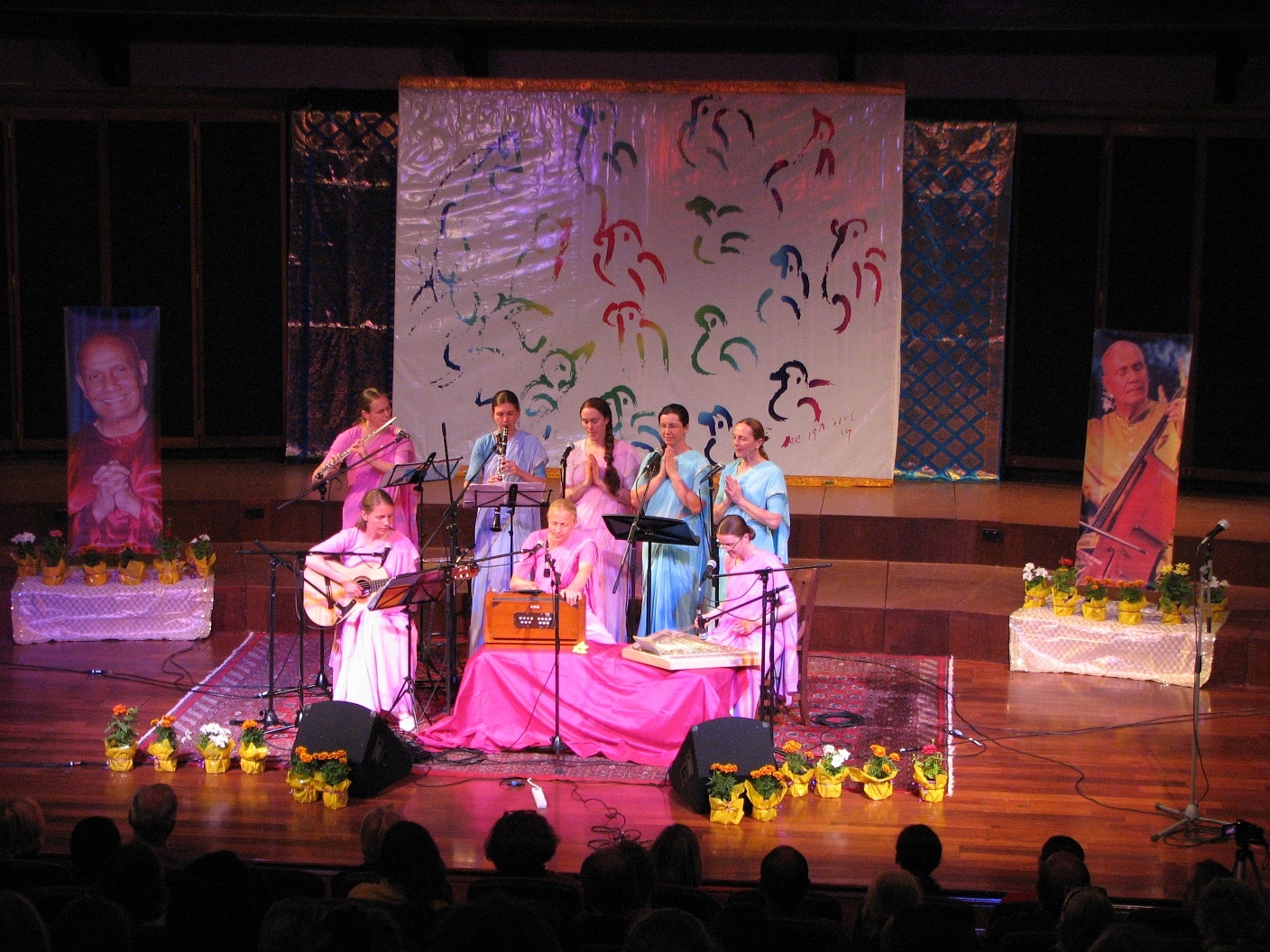 “Our first concert took place in June 1997 and since then we have offered over 200 public performances throughout Europe, Asia and Northern America,” said Agnikana.

The land down under was certainly something new for them. Their Australian tour started on 2 May at Perth Modern School Concert Hall. Then they performed at St Cyprians Anglican Church in Adelaide, headed to Melbourne at St Michael’s Uniting Church in Richmond and then onto Canberra for a 7 May performance at the auditorium in the China in the World Building of the Australian National University. The girls will have certainly be clocking up the frequent flyer miles before heading to New Zealand.

“We really found Australia magical,” Agnikana said. “Each concert is special, and Australia and New Zealand are places we have always wanted to perform.”

Learning about the group’s history, they have certainly had some amazing experiences. Many of them once performed behind Russian superstar Boris Grebenshchikov at London’s Royal Albert Hall, “But it wasn’t as our group,” Agnikana humbly explained. “So I don’t count that on the list of our performance venues.”

Abhejali Bernardova, a vocalist and harmonium player has solo swum the English Channel. Neelabha and Keertivati Senkyrova (Agnikana’s mother and sister respectively) were once elite orienteers in the Czech Republic. Agnikana herself has won several marathons. “Another philosophy we have in common is an aspiration for our constant development and the idea of self-transcendence,” Agnikana explained. “Each day can be a beginning of something new and more fulfilling. The goal for tomorrow is to move forward by a step and transcend the already achieved. It’s one reason most of us love sport and singing.”

There are plenty of free ways to hear the group online. Just search online for Agnikana’s Group. Just listening can turn a good day into a great one.

The dance of Vedanta