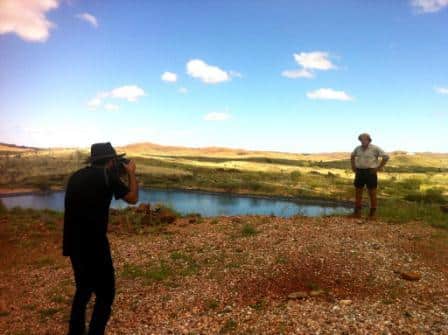 FORM’s engagement with these eminent Indian creative artists began with an exhibition as part of Divergence: Photographs from Elsewhere at the Midland Railway Workshop. This monumental showcase of photography from around the world was headlined by the three Indian photographers and renowned Magnum photographer, Martin Parr.

Heralded as the ‘must see’ exhibition of the Foto Freo Festival 2012, the event had two thousand people visiting within the first two days. On March 17, Sohrab Hura and Ketaki Sheth presented a slideshow on their respective bodies of work, and answered questions to an enthralled audience.

Bharat Sikka exhibited his series, Matter. Sikka is a mercurial creative – he photographs landscapes and portraits; moves between the studio and the street; between rural and urban India; from high-end commercial photography on assignments for magazines like Wallpaper, Vanity Fair, Vogue India and The New Yorker, to directing advertisements in a cinematic style as a Creative Director.

In Matter, we see Sikka’s distinct mode of visual storytelling, as he lures the viewer into an illusory world that collapses the boundaries between art and commerce.  Sikka is adept at creating moods and evoking emotion; he crafts longing and desire, illustrated in his poignant, romantic and intimate portrait of Carla Bruni, created for her No Promises album cover. Yet, his most compelling and intriguing images are developed as part of his personal projects, Indian Men, Space in Between and Salvador do Mundo which belong to the realm of fine contemporary art.

With his medium format camera, Sikka composes conceptually driven and visually sumptuous images that capture India as it transitions through a complex and awkward metamorphosis, grappling with globalization and the rapid changes brought about by accelerated, social and economic growth.

Ketaki Sheth’s exhibition Twinspotting, takes one inside the homes of the Patels, a community with a high percentage of twins (one in every 300 people is an identical twin, while one in 99 are fraternal). Sheth introduces the viewer to the immigrant community’s diaspora from the UK and Gujarat in India, from where they originated. The Patels are a highly migratory community and were the first Indians to move in large numbers to East Africa during the late 1960s and early 1970s, before settling in the UK and US, where they remain one of the largest immigrant populations.

Sheth has won the Sanskriti Award for Indian photography (1992) and Japan’s Higashikawa Award (2006) for best foreign photographer. In 2008, she was honoured with a special show of 50 works from her series Bombay Mix at Fête du livre in Aix-en-Provence. Sheth began taking pictures on the streets of Mumbai almost twenty years ago, under the guidance of renowned Indian photographer Raghubir Singh. She is influenced by the work of photographers André Kertész, Henri Cartier-Bresson, Eugène Atget, Walker Evans, Lee Friedlander and Helen Levitt.

Sohrab Hura, the young emerging talent from the group exhibited work from his Benares, Holi and The Naga Sadhus at the Ardh Kumbh Mela series. Hura is a young photographer who has been lauded as one of India’s next generation talents. He is widely exhibited and has won three Indian Press Photo Awards, (Benares in 2006, Oasis and Holi in 2008), a China International Press Photography Award for Holi (2010) and he was a recipient of the Magnum Foundation’s Emergency Fund in 2010. Hura participated in an international residency for young photographers called Pour l’instant Rencontres de la jeune photographie internationale, at Niort, France.

After attending the opening, the photographers, accompanied by Devika Daulet Singh of Photoink, New Delhi, and yours truly as FORM Curator, travelled with the photographers to Karratha. The journey began from Point Samson to Roebourne, to Wickham, Port Hedland and Marble Bar.

Throughout the trip the photographers met Pilbara personalities, visited Aboriginal communities and commented on the truly multicultural nature of the region which comprises of 52 different nationalities. They were awed by the intensity of the light and were unable to shoot between 1- 4pm, and by the vast expanse of the land.

The trip gave the group a chance to experience first-hand a lesser known Australia, one that is unique and memorable. As Sheth commented, “The landscape was so stark and staggering, the people so compelling, the light so harsh and the distance from anywhere seemed interminable. But in retrospect, I feel all of this helped get into the heart of it.”

The photographs will be part of an exhibition and publication, which will tour Australia and India.

DIVERGENCE: Photographs from Elsewhere, a  monumental showcase of photography by over 60 photographs from 15 countries, is on at the historic Midland Railway Workshops site (Yelverton Drive, Midland WA 6056) until 15 April. Ph 08 9226 2799

In India’s cities, life is lived on the streets – how...