In his electoral defeat, Trump can still unite a divided nation on the brink of democratic collapse. 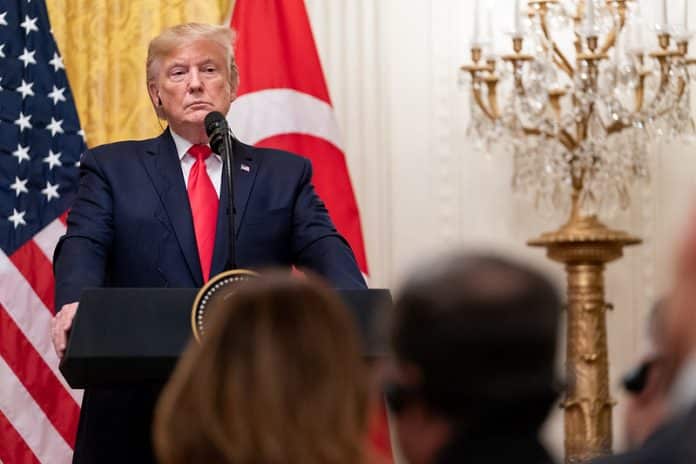 Reading Time: 4 minutesDonald Trump has long anointed himself as the saviour of America’s working class, a messiah sent by some higher power. Over the years, Trump has shared posts claiming he was “heaven sent”, endorsed quotes which refer to him as the “King of Israel” and the “second coming of God”, and even directly stated that he is the “chosen one” while looking up at the heavens.

These statements have never borne any resemblance to reality – Trump is perhaps the most divisive and unpopular US president of all time – but in his electoral defeat, and for the first time in his presidency, it is finally true: Trump is the only one who can save America by uniting a bitterly divided nation on the brink of democratic collapse. Yet, unable to look beyond his own personal grievances, Trump has chosen not to do so, threatening a peaceful transition of power and casting further doubt on the integrity of what was just a decade ago one of the most robust democracies in the world.

With nearly 71 million votes cast in his favour at the time of writing – the most ever for a sitting President – Trump enjoys a popularity that none of his predecessors can ever claim. In fact, Trump’s tally ranks second only to his conqueror Joe Biden, the President-elect, who notched up over 75 million votes in the tightly-fought US Federal election that has captured the attention of global audiences for several months now, culminating in the slow-burning crescendo of election week.

As mail-in ballots were counted after election-day ballots (largely due to policies driven by the Republican policies), votes for the Democratic candidates began pouring in, and Trump’s early leads in key states such as Michigan, Wisconsin, Pennsylvania and Georgia began evaporating. Trump and his allies, including his adult sons, immediately began attacking the integrity of the election, commencing frivolous lawsuits, making constant, baseless claims of election fraud and refusing to accept the outcome.

This response was not unexpected – Trump has long stated his opposition to accepting electoral outcomes, including in 2016 – but his refusal to concede defeat has nevertheless shocked. Trump is acutely aware of the remarkable sway he holds over his supporters, who have grown in number despite all projections to the contrary. They hang onto his every word and form perhaps one of the most energised and active political movements in America’s history. As a result of Trump’s less-than-Presidential response to a stinging defeat, half of the country now doubts the integrity of the most pivotal election in modern American history.

It is a dangerous state of affairs. Indeed, armed Trump supporters have already been arrested for attempting to storm a Philadelphia vote-counting site and stop mail-in ballots being counted. Others have gathered to protest and intimidate volunteers at vote-counting locations in states where mail-in ballots were eroding Trump’s lead, chanting “Stop the Count” (ironically, but with no self-awareness, Trump supporters chanted “Count the Votes” in Arizona where mail-in ballots were assisting the Trump campaign).

Though Biden and Harris may be able to capture the support and respect of some of these supporters – and Biden’s thoroughly unifying and uplifting speeches so far have been a good start – 71 million is far too wide a gap for the 77 year-old to bridge.

And yet in his defeat, Trump and his staunchest GOP allies have opted not to help Biden build that bridge. Instead, Trump has ensured that Trumpism will prevail above all else, to the enormous detriment of the healing process that the country desperately needs to commence. Trump could have chosen – or been publicly encouraged by senior GOP members – to concede while speaking to the popularity of his movement in increasing democratic engagement on both sides of the political spectrum, the fact that he widened the demographic base of the Republican party, and that he proved that the country’s political elite are not immune to anti-establishment challengers.

The state of play though, is that beyond some divine intervention, only Trump, for once the messiah, the chosen one, the heaven-sent saviour of America, can unite such a deeply divided nation. Only Trump can restore faith in the American democracy and electoral system. Only Trump can convince his supporters to lower the temperature of the searing political rhetoric. Only Trump can hit a pause on Trumpism to restore a sense of normalcy and stability to the country’s bitter political divide. Only Trump can give the Biden administration the legitimacy it needs to govern effectively for all Americans.

In an election where 71 million people voted for a losing candidate who refuses to accept defeat, the less optimistic have every reason to remain worried over what lies ahead for American democracy. There is certainly cause to celebrate briefly, but the nightmare is not close to over; it may be just beginning.