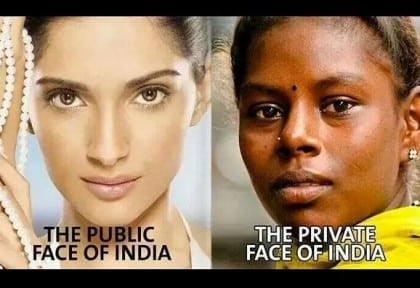 We live in a toxic world where almost everywhere we turn we are bombarded with ways to look better. Every magazine is raving about a new fad diet that is “Guaranteed to shed 10 kilos in 10 days”, or new pills that “drop fat instantly”. We are constantly being told how to look and how to dress. Everything we do is never enough, there are always more kilos to drop, more ways to make hair shinier, more ways to make teeth whiter. Because in our world, beauty means happiness.

As young girls of Indian heritage in Australia, there are a plethora of cosmetics and diets we are told will make us perfect. Being Indian, it is clear that there is an obsession with fairness. Every Indian TV advertisement features celebrities endorsing creams that are “not just creams, but fairness treatments”. If that is not enough, there are always the desi home remedies of turmeric and milk to make our skin shining white. The fairness industry in India is worth billions – anything to get rid of the curse of duskiness. Especially in Punjabi cultures, the word dusky is spoken with a nose wrinkled, uppity look. Being fair means being of high social standing. A recent social campaign named “Unfair and Lovely” gained much momentum on social media for celebrating the beauty of caramel skin tones. This is not to say that having fair skin is bad, rather it’s saying that not having fair skin is not something to be ashamed of – it is something to be celebrated.

India is one of the most multicultural places on earth, where Indians from the extreme north (Punjabis) and extreme south (Tamillians) are so starkly different both in their looks and behaviours, yet united under their label of Indian. However, much racism still exists.
In fact, this is not racism, this is colourism, and is plaguing the minds of young, impressionable girls. This colourism has been deeply entrenched in Indian cultures for many decades, to the point where skin bleaching has become normalised, rather than discouraged. We need to promote a healthy culture where difference is something to be celebrated rather than feared.

Besides the Indian colourism influence, there are also many influences in Australia that push young teens to hate themselves. We are told that everything we have needs to be changed; the way that we are born is not good enough. Social media idolises the likes of the Kardashians, who are genetic freaks of nature in their beauty. Last year, the ‘Kylie Jenner Lip Challenge’ gained much popularity, where teens across the world sucked on shot glasses to get swollen lips to match the large, supple lips of the youngest Kardashian. This was a very dangerous practise and resulted in many emergency procedures with irreversible damage done to many teens. After this fad died down, Kylie Jenner revealed that she had in fact undergone lip fillers. The Kardashians maintain their superhuman standards of beauty by undergoing countless amounts of plastic surgery.
We mere mortals try to imitate this by turning to any cosmetics with the name Kardashian slapped across them. The beauty technique of contouring has grown immensely after it was revealed that Kim Kardashian rearranges her bone structure by contouring using makeup. After this was revealed, budget to high-end brands released contour palettes to be devoured by young girls trying crazily to gain the unattainable “Kardashian look”.

Besides the multibillion-dollar cosmetics industry, young girls are also obsessed with being thin. Being a teenage school girl, I have seen firsthand the freakish fascination with weight loss. Private school culture is full of parties and social standing. The “it girl” is likely a leggy bombshell that wears size nothing and flaunts her toothpick limbs at parties. The other girls follow suit and try countless numbers of diets to get the “perfect” figure. I have seen friends suffer from anorexia and bulimia to try to fit in and be skinny enough, and therefore pretty enough, to meet the impossibly high standards of beauty.
This is a fundamental flaw in our upbringing, where we are given Barbie dolls to play with as young girls. These Barbie dolls are tall and gorgeous – yet a completely misrepresentation of actual women. These dolls resemble Victoria’s Secret models rather than average young girls. Yet, from a tender age, we are given unconventional and frankly unrealistic standards of beauty which follow us into our teen years, where we are willing to go to any lengths to be beautiful, and therefore, happy.
This sick fascination with beauty is horrific, yet a true representation of society’s system of equating beauty with happiness. This needs to be stopped from a grassroots level, by teaching self-love and acceptance, rather than being told that we must fit a certain cookie cutter ideal. Beauty is in our imperfections, not in our physiques.