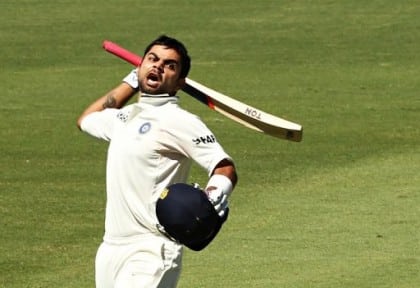 Sporting news headlines in Australia and India are currently being dominated by the actions of – and the reactions to – Indian cricket captain Virat Kohli during the hard-fought second Test match between the two countries in Bangalore. Never one who was backward in coming forward, Kohli’s naked aggression on and off the ground has been at once lauded and criticised.

So, how will his behaviour pass the pub test? Well, to an extent, it will depend on where the pub is located. There is little doubt that punters at pubs in India will probably shout Kohli a beer (or two); in Australia he may get an opportunity to quench his thirst in a few pubs, at others he may find it difficult to get a drink.
Kohli does have a tendency to divide people: he is admired for his unbridled aggression and ambition, he is also criticised for the very same. The critics would like him to hide this behind a more balanced and perhaps demure approach. Demure? For a boy from Delhi, this would be a challenge at any time.
That Kohli is not one to back down, was pretty clear when on the second day of the Sydney Test match in 2012, Virat stuck his middle finger out to a group of abusive spectators as he fielded at mid-off. Dubbed ‘Fingergate’ at that time, the action was applauded by Indian legend Amitabh Bachchan while duly criticised by all Australian media. Kohli later defended himself on Twitter, “I agree cricketers don’t have to retaliate, what when the crowd says the worst things about your mother and sister, the worst I’ve heard (sic)”. While other cricketers may have chosen to ignore the crowd chants, Kohli threw it back at them.

Observers have linked Kohli to modern India – young, brash and aggressive – someone who will not take anything lying down. There was a hope that he will mature as a captain but it seems that may still be a while away.
As the Australian tour to India has built up, the Australian team did what they have done well in the past – they started playing the man. Pick someone in the opposite team and start the verbal and media war against the person. “Maybe they felt they could get under us if they really came out and got personal with some of us,” South African great AB De Villiers said prior to the 2014 series.
Virat Kohli was the target before this series, with the Australians making it clear that if they could get under his skin, this could put pressure on India.

They did, but the results have not been what they expected. It did bring the aggressive – and yes, the abusive – Kohli to the fore and the last few days of the second test match saw him at his very best (or worst). Perhaps the reason the Australians don’t like Kohli, is he is way too much like their own team.
In 2017, cricket is not a gentlemen’s game anymore. It is a hard-fought contest in which both teams are expected to compete. And the rivalry between India and Australia does make for some fascinating viewing.
There’s a cold one in my fridge for Virat anytime.