Hijab and the workplace 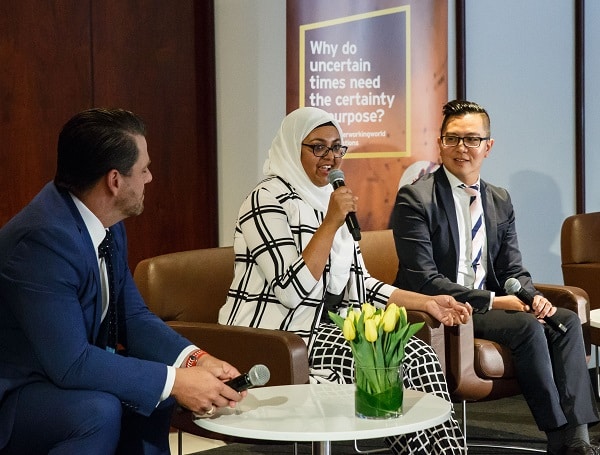 What is the problem with wearing hijab in the workplace?

Is it the fear of judgement, of being sneered at? Or, is it the fear of becoming the unknowable other, that there is nothing in common and never will be? These pertinent questions lie at the heart of the hijab-wearing narrative.

Having worn the hijab for over 20 years, it is as much a part of me as my skin is, and I am conscious that I am judged on both. We live in a society that is continuously stimulated, educated and influenced to focus on the visual outer appearance, leading to an ignorance that breeds fear of the other – anyone that looks or acts different.

I started working at a time when words like terrorism and Islam had become synonymous; when people were too polite to use words to articulate their feelings, but their eyes spoke volumes. I forged ahead and stubbornly built my resilience to prove naysayers wrong. I was committed to my work, talked to my colleagues with an open mind and engaged in heartfelt conversations; we realized we were not so different after all. Once I gained experience in my field, I stopped worrying about looking different because, now, my confidence did the talking.

Today, I don’t fret about fitting in or impressing anyone but myself. I am not competing with others but trying to be my best self. However, I acutely understand how scary it is to enter the workplace as a minority and to try and fit in. When I first put on the hijab, I had no idea about its significance; it was just a part of my school uniform. As a teenager it made boys avoid me or call me names. As a young woman, it became a source of both consternation and solace especially when Islam swung into mainstream scrutiny. I knew people were looking, but I also knew my fellow Muslims were smiling at me.

I understand how temporal life is, and I aim to become closer to God. To attain that goal, I wear this shield; it reminds me of who I am, what I represent, and how I can and should behave. I wear a hijab because it imbues me with kindness, empathy and intelligence.

The hijab doesn’t decrease our IQ. Use your acumen to show colleagues how intelligent and able you are. There will always be well-meaning career counselors advising us against putting a LinkedIn photo with our hijabs on, as it might hinder our career progression. Those pieces of advice don’t matter if you know your self-worth.

Media feeds people with a negative portrayal of Muslims. You can change that perception by showing them your intelligence, humour, culture, kindness, confidence and even fashion sense. If you can show them that their behaviour, reluctance to engage, avoidance of you is unnecessary, they will surely change the way they conduct themselves. But, if you confront and attack their attitude, they will hold on to their bigoted views rigidly. You can make a difference by modelling a behaviour you want others to emulate.

More importantly, I stopped thinking, ‘what will people say?’ Some look at the hijab and assume you are extremely religious, others might think you are oppressed. Then some would think you represent all Muslims.

It does not matter what people think, say or do. What matters is your connection with God, as represented by the hijab; a sacred bond between you and your creator, one that you carry everywhere.

So, what is the problem with wearing hijab in the workplace? It’s people’s attitudes and behaviours stemming from a misunderstood fear, and that’s the easiest one to address. Much of how we are perceived in the workplace depends on how we see ourselves.

I see myself as a Muslim, a woman, a professional and a passionate individual eager to learn and contribute. If you want to wear the hijab full time or part-time, cover yourself fully or partially – it is your choice!

Don’t worry about what others will think, or what your employer will say. It can be hard, but you are not alone. You will be walking a path chosen by many before you, and you will light the way for those that follow. Use that knowledge as your secret weapon, and it will get you through anything.

Taking the knee: Quinton de Kock lets his team and country down