A tribute in dance to a guru, mentor and friend 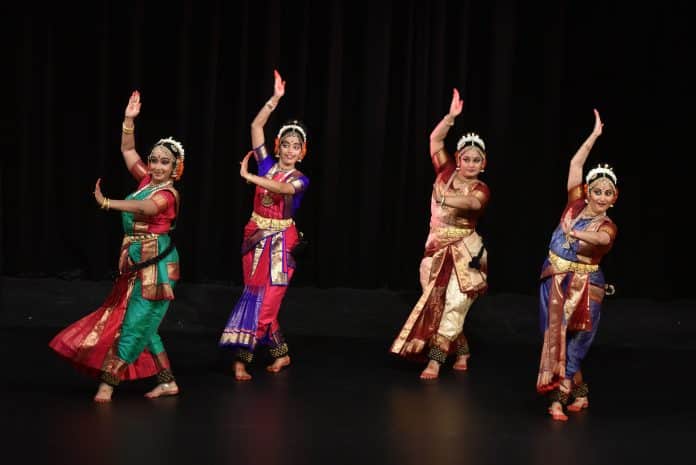 Vanaja Dasika stood on the stage as Nandanar, her legs bent, her arms stretched and her eager eyes gazing at the sky. There was the desire to see the Lord. Add to it expectation, and frustration, in equal measure. Then as she covered the length and breadth of the dais, she revealed several of her character’s thoughts and emotions: will I see Him or not? How long is this wait? When she finally did see Him, it was a moment of pure bliss.

The number heightened the Kuchipudi experience. The dancer Vanaja was portraying an incident from the life of Nandanar, a saint and an untouchable, who appears in Tamil religious literature and temple lore. He is said to have stood in front of the temple in Chidambaram and appealed to the Almighty to appear before him. God, the story goes, did ultimately surrender.
The vilamba tempo music for the great composition by Gopalakrishna Bharathi, Enneramo undan sannidhi ilena iruka vandum ayya, delivered by a great voice; the equally paced slow movements of lovely Vanaja; the colours, and the appropriate lighting – all converged in creating a memorable experience for the audience. At the risk of overstating, let me say that a responsive audience would melt into nothing watching her performance.

The occasion was Vempati Narthanam, an exposition of Kuchipudi dance choreographies organised by Sydney’s Kalabharathi Performing Arts in mid-November. It was a glorious tribute to Vempati Ravishankar, one of the greats of contemporary Kuchipudi who passed away earlier this year. It was presented by dancers Shobhana Kambhammettu and Sailaja Kambhammettu (both students of this artform and based in Sydney) along with Priyanka Vempati and Vanaja Dasika from Chennai.
“Dance was the very breath that Vempati Ravi Shankar drew,” Sailaja Kambhammettu described. “His passing is a profound loss, and we wanted to express our gratitude and pay tribute to a guru who gave us so much. We grew not only as dancers, but simply as humans.”

Ravishankar learnt the artform from his illustrious father Padmabhushan Vempati Chinna Satyam. The dances presented, with pre-recorded music, were choreographed either by Chinna Sathyam or Ravishankar and were a testimony to their “grand vision” for this ancient art.
“It is important for us that audiences see the genius of Vempati Ravi Shankar,” Sailaja went on. “His style is a fascinating transition from Vempati Chinna Satyam’s work because there is a deeper exploration of movement and a shift in aesthetic. His style is a lot more dynamic, and challenges the dancer to reconsider their relationship to movement, ie you cannot intellectualise the movement, the body has to be able to flow.”
Indeed, the four dancers on the night did their “Guru, mentor and friend” proud.
The other highlight of the evening was Aalokaye Balakrishnam, a composition of Narayana Thirtha. Krishna is unique to us. He behaves like a child and steals butter, exhibits miracles, shows the entire universe in his mouth to his mother, kills demons and the snake Kalinga, plays with Radhikas, and preaches the Bhagavad Geetha and absolves us. Priyanka enacted the several facets of Lord Krishna, bringing together all the elements of the Kuchipudi style including dancing on the plate. The audience was on the edge of their seats as she mounted the plate and began to move it around. There was an interesting dialogue between her and the Nattuvangam during this. Her ease and effortless movements here deserve a special mention.
Earlier that evening, the very first item presented, an invocation to Lord Ganesha, was a challenge, being in pancha gathi or a mix of five talas.  Shobhana and Sailaja exhibited clever nadais. This was followed by Mansa Sancharare by Priyanka and Vanaja. Shobhana then brought out the lengthy piece Pannagendra Shayana with many episodes of abhinaya and jathis. Narayana Ninna by Sailaja on the other hand, seems to have been a misinterpretation of the great composition by Purandara Dasa.
In the end, it turned out to be a wonderful evening of classical joy. Kudos to the young artistes for their efforts to preserve and promote our rich tradition of dance.

"Please switch off your cameras, your phones and put yourself on speaker view, not gallery view," announced...
Read more
Features

When we think about film shoots, we imagine large sets, expensive camera equipment, vanity vans, and so...
Read more