Home Main Category Why NOT to be a domestic goddess

Someone said to me a few months ago, commenting on a project I was working on, “How do you manage to do so much?” I usually chuckle and dismiss this question, but the other day, my kitchen sink flashed before my eyes. I didn’t laugh this time. I shrugged my shoulders and said, “I don’t clean.” Here’s my take on why I don’t wish to be a domestic goddess. 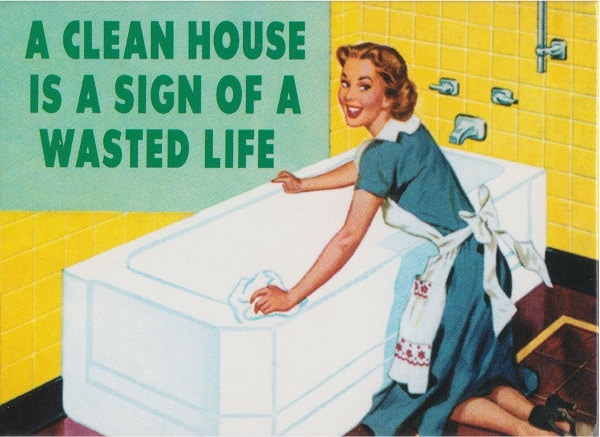 I genuinely don’t. And nope, no cleaner either. As I write this, there are three dust bunnies in my living room waiting idly by for their next chance to swirl gaily around my living room. There’s an envelope from ANZ from 2016 that sits next to my TV. There’s cat litter on my bathroom floor, a layer of dust on my TV table, and the kitchen sink is full. (The only thing I do regularly is laundry, because, personal hygiene.) I regularly have aha! moments when I find long lost things stuck between the cushions of my couch. Hmm, maybe that’s where that DVD remote is.

Now I don’t try to be messy person, I just don’t really care enough about the state of my house to do anything about it regularly. And this is particularly important. Because time I don’t spend on cleaning is time I spend on, dare I say, more interesting and important things. And it is a lot of time. The average Australian woman does between 5 and 14 hours on housework a week, according to the 2016 census. The typical Aussie man? Less than 5.

So what did I do with all that spare time? Apart from working full time, I presented at my first ever IT conference, presented on five other occasions for work, was on two panels for a documentary I’m working on, emceed an event at the Jaipur Literature Festival, worked for the Melbourne Writer’s Festival, curated and performed in a concert, trained in Carnatic classical singing, wrote half a dozen pieces for this newspaper, worked on two community projects on domestic violence, completed a leadership course and was nominated for an award on domestic violence reporting. I also lost three kilos of fat, put on two kilos of muscle and can now do two pullups. Ok fine, only 1.5 pullups.

The point is, I had time to do a lot. (I acknowledge that privilege enables these activities, including that I can indeed choose not to do housework) This is time men usually have and women don’t because it is expected that they keep house. And this has significant implications for both personal and professional achievement for women. According to research, women pick to spend time on housework over employment. Such is the pressure housework puts on women.

Plus, turns out that cleaning can actually be dangerous to your health. Women do the lion’s share of cleaning and are exposed to more chemicals, which likely cause substantial damage to women’s lungs, according to a study published in American Journal of Respiratory and Critical Care Medicine. So stop cleaning, right?

How’s this for a cruel joke: we still suffer if we reduce the amount of housework we do. As women, we’re socialised to believe that keeping house is our responsibility, and we’re judged by it. So when we don’t think we’re doing enough, we feel guilty about it and our health suffers, as evidenced by a study in the Sex Roles Research Journal. What is a woman to do?

The key is to change our gendered expectations, including what we expect of ourselves. My mother did very little house work around the house (we had maids, which is problematic in different ways) so at least at home, I escaped that socialising. Walking over a sock that’s been lying on the floor for two weeks is possibly easier for me; my sense of worth isn’t tied to how neat my house is. And any insecurity I had about this behaviour was put to rest by a younger, feminist friend who called me her role model because my house was messy. Maybe that’s what we need. More messy female role models. And reassurance that our home is not the measure of our worth. My reassurance comes in the form of a mother who steps over socks in tandem with me. And a fridge magnet that reads, ‘A Clean House is a Sign of a Wasted Life.’ This International Women’s Day, perhaps we should all get one.