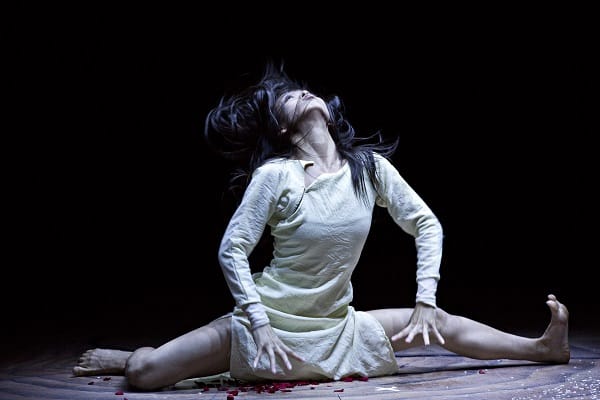 Adelaide OzAsia 2017 opened with Akram Khan’s production of Until the Lions. Like many blockbusters this dance theatre performance has it all. Desire, abduction, betrayal, a supernatural incarnation followed by destruction and then the ultimate revenge – death. What more could one want for entertainment.
Legendary kathak dancer and choreographer Akram Khan has brought his vast experience to bear in giving life to characters from Karthika Nair’s poem Until The Lions which is based on a story from the Mahabharata. There is an African proverb that explains that ‘until the lions have had their say, their story will be told from the point of view of the hunter’. Seemingly lesser characters, especially women, are usually ignored in favour of the more important ones when stories are told. Karthika Nair takes the side of the less fortunate and tells the story of poor Amba, a character in the Mahabharata, who is to be married to the emperor Shalka but is abducted by Bheeshma. Bheeshma decides he will be celibate so does not wish to marry Amba. Amba goes back to Shalka but is rejected by him. Finding herself in such desperate circumstances, she takes her own life but returns in a super-natural male form to eventually exact the ultimate revenge on Bheeshma.

In the production the costumes were plain as the stage was sparse. However, a unique and very clever feature of the performance is the set, almost as large as the stage, in the form of a cross-section of a mature tree, even showing age-rings with fissures rent into it. In the later stages of the performance, it comes as a surprise to see the set playing an active role in setting the ambiance and underpinning the trauma of situations.
After a slow start with Amba, played by Ching-Ying Chien, dancing often in a crablike crawling fashion to growling sounds, the guitar takes over followed by melodious singing accompanying the dancers. The live music is provided by guitar, percussions and two voices. The four musicians station themselves around the edge of the tree-trunk set. On occasions throughout the performance they walk round the set as they perform, sometimes like street musicians.
There are poignant moments and moments of passionate despair throughout the performance. Rianto’s dance of Bheeshma disclosing his turmoil is really well done in the dramatic action of the dance. Joy Alpuerto Ritter is striking for the entire show with her controlled movements while Ching-Ying Chien is outstanding. There is energy in vibrant actions and occasional stillness being depicted by gentle flowing movement. At times the dancing defies human physicality and at others is harsh, delicate, beautiful and ugly as the story demands.


One soon realises that the music is very much part of the performance and not just background accompaniment. Percussion is played to devastating effect in creating the right tempo for the dancers and a sense of fear and foreboding for the audience as the story unfolds. Primeval and atmospheric sounds contrast with the soft, gentle guitar music where Sohini Alam’s voice shines in melodic tunes and dramatic crescendos. Singer David Azurza was exceptional in his countertenor voice with his ethereal singing as dancers caressed his music with their movements.
There were several passages of music in the Kathak tempo. It would have been nice to have seen some Kathak dancing with this music. Not just for the elegance and sensuality of Kathak per se, but to tie the performance back to the Indian roots of the Mahabharata. Were Akram Khan present in Adelaide we could have expected to see the dance. However, as he states in the programme notes ‘I have been contemplating the uses and capacities of my body, as I turned 40.’   It’s quite understandable if he was not present after so many years of dancing at the very highest levels. Nevertheless, Rianto as Bheeshma did a fine job of dancing to the Kathak beat, albeit perhaps in a different style.
Like plants, some productions are annuals and some perennials. Akram Khan’s Until the Lions is a solid production where many elements come together. It has had worldwide exposure and is continuing to do so. Until the Lions is undoubtedly a perennial and with Akram Khan devoting more of his time to production and choreography, we might well be treated to many more delights.

So the dance comes to its climax. Amba, in her supernatural form as Shikhandi, is going to take Bheeshma’s life. The set and lighting become a living being, a force of cosmic proportions. The scenes of horror and emotion see the stage rupturing along its fissures. Segments of the tree lie at different levels. Such is the force of the situation. Like erupting volcanoes, fires glow from the gaping fissures, embers fly, the dancing is insane and so to the end as Amba has her say.
Photos: Jean Louis Fernandez
- Advertisement -
Share
WhatsApp
Facebook
Twitter
Linkedin
Previous articleReaching out to Indian-Australians on Diwali
Next articleFor argument’s sake