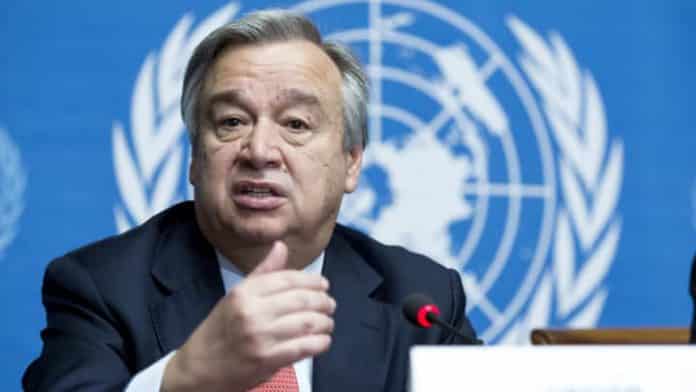 Secretary-General Antonio Guterres is having discussions “at different levels with different parties” about the tense India-Pakistan situation, his Spokesperson Stephane Dujarric said on Wednesday.
He refused to say who those parties were or the levels of contact but said the discussions were “to make sure that we have, we get a full picture” of the situation. “The message coming out of those discussions is on the need for both countries to do whatever they can to de-escalate the situation,” he said.
Guterres is “kept appraised of the situation” and is following it, Dujarric added. Asked if the discussions were mediation efforts, he replied, “I have said what I have to say.” When pressed further, he said, “I’ll let you characterise it.”

He also reiterated that Guterres’s good offices were available if they were requested by both parties. Guterres is calling for “maximum restraint” by both countries. “He is obviously following the situation very closely and reiterates his urgent appeal to both the government of India and the government of Pakistan to exercise maximum restraint to ensure that the the situation does not further deteriorate,” Dujarric added.
India has said that its Air Force chased away intruding Pakistani jetfighters in Kashmir, shooting down an F-16 that fell on the Pakistani-controlled side, while an Indian MiG-21 was lost in action.
Pakistan said it had shot down the plane, which crashed in its territory, and displayed an Indian Air Force personnel it had captured.
On Tuesday, Indian Air Force bombed a Jaish-e-Mohammad (JeM) training camp in Balakot in Pakistan, 12 days after a suicide bomber killed more than 40 Central Reserve Police Force troopers. Pakistan-based JeM admitted to carrying out the attack.