The meaning of Anzac Day according to young Indian Australians 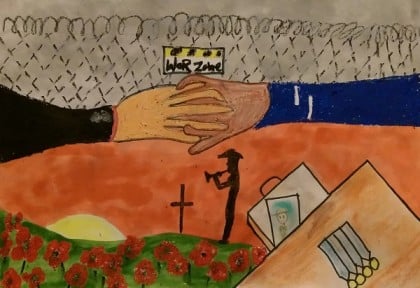 The theme of this painting is to honour Australia and NZ troops in the war and represent how conflict can be resolved in peaceful ways. Ananya depicted negotiation, sheltering refugees and remembrance.

Mud, Blood and Tears
A poem by Arjun Gill, 13

They landed on a pristine shore
but by the end there was gore
Soldiers from many nations collided –
unfortunately the number of deaths were one sided
Brave soldiers gave up their lives on orders
but hell broke loose when the ANZACS crossed Turkish borders
Some had flashbacks for many years;
others died in the mix of mud, blood and tears
Young gullible men set out for an new experience
But their fate was at their expense
War is a harsh cruel world-
Bullets fly through the air and cannonballs are hurled
It is hard to believe what the soldiers gave up for their nations
Some fell short of enemy trenches, others ate hard cold rations
Some were told to march straight in open fire-
Others helped soldiers recover and be free to respire
The selflessness every soldier shows is hard to believe
Crosses stand where the bodies had been retrieved-
Poppies listen to the sound of the bugle played
They marched boldly on with the Australian flag, not withered nor frayed
They will always stay in our hearts forevermore
They made a Australia a proud nation for sure

ANZAC
A poem by Ria Bhagat

Colonel Ernest Edward “Weary” Dunlop was the embodiment of the Anzac spirit. His selflessness is seen throughout his escapades in Europe, the Middle East, Africa, Java and Burma. He was voted Australian of The Year in 1976 and holds the title of Victoria’s only representative in the Rugby Hall of Fame. He was most notably remembered for his kindness towards the prisoners he was in command of, and his selflessness in prioritising his patients’ lives ahead of his own.
The qualities of the Anzac spirit are perceived to be integrity, courage, being humorous, larrikinism and mateship. Dunlop displayed all of these qualities throughout his time on the battlefields. He was originally stationed in Jerusalem and served with the 2nd Australian Imperial Force. Afterwards he served in places such as Gaza, Alexandria, Greece and Crete where he was tasked with the clearing of casualties on the battlefields. It is only when he was stationed at Tobruk, Libya, when his full potential as a surgeon was realised. He was made the lead surgeon and survived the Siege of Tobruk. In 1942 his unit was transferred to Java, Indonesia where he was captured by the invading Japanese forces. Later he described how in Java he had an opportunity to escape, but he did not want to abandon his patients, displaying the qualities of courage and integrity.

Dunlop was imprisoned in Singapore in January 1943 when he was sent to Thailand to be the Medical Officer of the infamous Thai-Burma Railway. The Railway itself took one year to build, starting in October 1942 and finishing in October 1943. It ran from Bangkok to the Burmese town of Thanbyuzayat. It was intended as a way to attack India. More than 13,000 Australians worked on the railway and the bridge over the River Kwai. The Japanese had an enormous number of prisoners and, as described by Dunlop himself in a journal entry, conditions in their residences were terrible.
In total, 12,000 allied soldiers died during the construction of the railway, including 2,700 Australians. The most common causes of death were dysentery and diarrhoea. It is said that because of Dunlop a massive number of casualties were prevented. Dunlop was responsible for over 1000 men and he was famous for his caring of the ill and his willingness to put himself at risk. He made a hospital for the sick and managed to perform advanced operations with scarce resources.
After the war, Dunlop continued to help soldiers evacuate from Thailand and made sure that all of his surviving men were well taken care of and in a stable condition.
His wartime days were not over, however, as he and his son helped in the Vietnam War. He led a team of surgeons to help injured civilians in South Vietnam. Wherever Dunlop went he was well liked and demonstrated the characteristics of a true Australian as well as being a great leader.
Colonel Ernest Edward ‘Weary’ Dunlop should be an example to all Australians and is the person who truly encapsulates the Anzac spirit.
Even after his death, today ‘Weary’ Dunlop lives on as an example of how one man can serve a country so proudly; and how an individual’s courage and selflessness in the face of adversity is one of the most important parts of being Australian.

Lest We Forget
A poem by Kuvam Bhagat, 10

An unlikely friendship
A short story by Manan Paavan

Dear Diary,
Yesterday proved a challenge for me. This battle at Lone Pine has been hell; indeed from the 25th of April this whole journey they call the Gallipoli campaign has been godforsaken. Australian and New Zealander soldiers dead before they even reached the sand; the water dyed red like poppies. I think it’s the nights that are the hardest. War favours darkness – it’s when we’re most vulnerable to attack. Luckily, we’ve had some help from an unexpected source, the 29th Indian Infantry Brigade.
The Brigade have shown themselves to be of the highest class. Arriving at our own Anzac Cove just 5 days ago, they have constantly been engaged in combat. I don’t think they know when (or if) they’ll be given a night of rest. From what I’ve seen while working with them, there is a strong work ethic – their immediate response to the call of duty is something I have seldom seen before. Just yesterday this was proven to me more than ever. Under intense rifle and machine gun fire, myself and several other soldiers were ordered to halt the enemy advance. This meant going out onto the parapet and advising those in the trenches where to throw their bombs. All this was done whilst under constant sniper fire. Some say that my actions will bring me a Victoria Cross, however I wish to commend the service of the Indian soldiers during this situation in my own personal diary. It was with the assistance of their specific mission, to take over a part of the left assaulting column, that we were able to subdue the enemy. Their actions allowed us to work together to achieve the same overall goal. We weren’t separate forces by then – we were one unit.
One man in particular I wish to write about is Gunner Karam Singh. He continued to relay fire orders from his own OP officer long after he had been hit in the face by shrapnel. It was an injury that would leave him permanently blinded in one eye. I have no doubt that he was by far the most courageous gunner on Hill 60. It takes a special man from a special type of military to have that much faith in his officers, and I one day hope to see such trust in our own Australian ranks.
On this day, I know not when this campaign will end. I’m simply here to fight for my country and what it stands for. That means doing whatever it takes to win this war. However, these past few days have shown me something I did not expect to see. They have allowed me to see a military structure developed off a deep trust and strong moral code. The Johnnies in Gallipoli will no doubt be remembered with great affection and high regard. It’s been a true honour to have them work with us.
Private John Patrick Hamilton