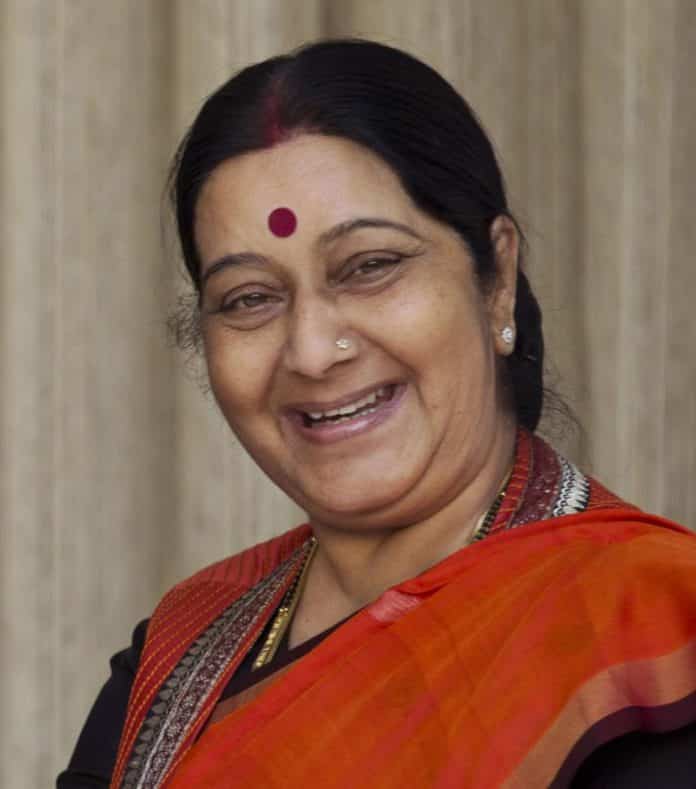 Reading Time: 5 minutesJust a few hours before she collapsed and died, former External Affairs Minister Sushma Swaraj had tweeted her thanks to Prime Minister Narendra Modi for revoking Article 370 on Jammu and Kashmir. “Thank you Prime Minister. Thank you very much. I was waiting to see this day in my lifetime.”
That was her last communication on the social media platform on which she had over 13 million followers. She would actively tweet about major happenings, though she decided against contesting the 2019 Lok Sabha elections or on joining the Narendra Modi 2.0 government due to health reasons.
Sushma Swaraj, who died aged 67, tweeted her condolences on Congress leader Sheila Dikshit’s death on July 20, saying that although they were political opponents, they were friends in personal life.


Swaraj, who brought her innate grace and charm into her work, was certainly not cowed by Twitter trolls. When someone tweeted that like Sheila Dikshit, she too would be remembered after her death, Swaraj sportingly tweeted back, “I thank you in anticipation for this kind thought.”
Though she was often overshadowed by Modi, who went on most of the diplomatic trips during her tenure as External Affairs Minister, Sushma Swaraj did not retire into the shadows.

She made her mark in her own way – connecting with the diaspora far and wide, and reaching out to help them. She would respond to every appeal for assistance, and make sure the Indian missions responded to the requests. She brought a human touch to the Ministry of External Affairs, and won millions of admirers across the world, including many in Pakistan.
Many Pakistani patients would appeal to her for medical visas via Twitter, and Swaraj would try to accommodate their requests. She would also connect with some of the Pakistanis who she helped get emergency medical visas. In 2017, she won admiration when she granted a year-long medical visa to a Pakistani girl Shireen Shiraz for an open heart surgery.
As Leader of Opposition in the 15th Lok Sabha, Swaraj was a formidable and compelling speaker. She would attack the ruling Congress-led UPA without pulling any punches, as was evident in a fierce poetic exchange between her and then Prime Minister Manmohan Singh in 2013.

Many Pakistani patients would appeal to her for medical visas via Twitter, and Swaraj would try to accommodate their requests. She would also connect with some of the Pakistanis who she helped get emergency medical visas.

Manmohan Singh, accusing the BJP of making unwarranted attacks on his government, recited a Mirza Ghalib couplet. “Humko hai unse wafa ki umeed, jo nahi jaante wafa kya hai (we hope for loyalty from those who do not know the meaning of the word).”
In response, Swaraj narrated a verse by Hindi poet Bashir Badr, “Kuch to majbooriya rahi hongi yun koi bewafa nahi hota (there must have been some compulsions, one is not disloyal for no reason at all).”
She continued to quote, “Tumhe wafa yaad nahee, Humein jafa yaad nahee, zindagi or maut ke toh do hee tarane hain, ek tumhein yaad nahee, ek humein yaad naheen (you don’t remember loyalty, we don’t remember disloyalty, life and death have two rhythms, you don’t remember one, we don’t remember the other).”
Always dressed in wide-bordered saris and donning her trademark big red bindi and sindoor, Swaraj carved a niche in the BJP through effective presentation of her views both within and outside the Parliament.


Following the 2004 elections, when Congress was set to form the government at the Centre, with Sonia Gandhi being touted as the likely Prime Minister, Swaraj threatened to shave her head, wear a white sari and eat groundnuts (symbolical of mourning) if Sonia were to be the PM.
Swaraj had contested against Sonia in Bellary (Karnataka) during the 1999 Lok Sabha elections. While Gandhi polled 51.7 per cent of the vote, Swaraj was not too far behind with 44.7 per cent, and although she lost the polls, she continued to move up the party ladder.
Born on February 14, 1952 at Ambala Cantonment, Sushma earned a B.A. degree in political science. She studied LLB at Panjab University, Chandigarh, and married Swaraj Kaushal on July 13, 1975, at the height of the Emergency.
An advocate by profession, she began her political career as a student leader in the 1970s, organizing protests against Indira Gandhi’s government. She was associated with many social and cultural bodies in various capacities. She was President of the Hindi Sahitya Sammelan, Haryana for four years.
She was twice an MLA from Haryana during 1977-1982 and 1987-1990, and once from Delhi in 1998.

An advocate by profession, she began her political career as a student leader in the 1970s, organizing protests against Indira Gandhi’s government.

As a Janata Party MLA in Devi Lal’s government, she was the Cabinet Minister of Labour and Employment (1977-1979), becoming the youngest ever Cabinet Minister in the country at the age of 25. She joined the BJP in 1980. Under a combined Lok Dal-BJP government led by Devi Lal, she was the Cabinet Minister of Education, Food and Civil Supplies (1987-1990). She was judged Best Speaker of Haryana State Assembly for three consecutive years.
In 1980, 1984, and 1989, she unsuccessfully contested the Lok Sabha elections from Karnal in Haryana. She was defeated by the Congress Party’s Chiranji Lal Sharma each time.
Swaraj was elected as a member of the Rajya Sabha in 1990. In 1996, she was elected to the 11th Lok Sabha from South Delhi. She was Union Cabinet Minister of Information and Broadcasting in 1996, during the 13-day Atal Bihari Vajpayee government. She was re-elected to the 12th Lok Sabha for a second term in 1998.
Under the second Vajpayee government, she retained the Information and Broadcasting Ministry portfolio along with the additional charge of the Ministry of Telecommunications from March 19 to October 12, 1998.
Swaraj left the Union Cabinet from October-December 1998 to serve as the first female Chief Minister of Delhi. The BJP lost the assembly elections, and she returned to national politics.

She returned to Parliament in April 2000 as a Rajya Sabha member from Uttarakhand. She was re-inducted into the cabinet as the Minister of Information and Broadcasting, which she held from September 2000 until January 2003.
She was also made the Minister of Health and Family Welfare, and held the post of Minister of Parliamentary Affairs. She was re-elected to the Rajya Sabha in April 2006 from Madhya Pradesh. She served as the deputy leader of BJP in Rajya Sabha.
In late 2005, speculation was high that Swaraj was one of the top contenders to be BJP president after L.K. Advani resigned. However, Rajnath Singh was elected to that post. In 2009, she won the election to the 15th Lok Sabha from Vidisha in Madhya Pradesh, by a record margin of 3.89 lakh votes.
She was made Deputy Leader of the Opposition in June 2009 in the Lok Sabha, and in December that year, Swaraj became the first female Leader of the Opposition when she replaced Advani.
Sushma Swaraj’s accomplishments are many. She got into politics, when not too many women did. She will forever be remembered as a true trailblazer.
IANS