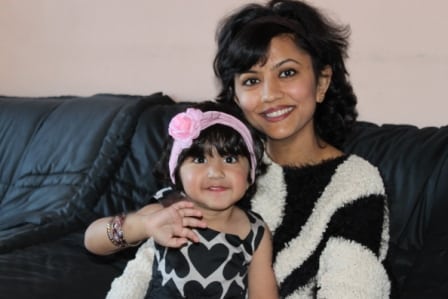 Sweety Makwana and her bubbly toddler make it a point to attend every Indian event possible. Dressed up in their weekend best, they always turn up at Bhangra, Dandiya and Bollywood Nites, gala dinners, fundraisers, charity bashes and such like. But unlike most partygoers, the duo is hardly there for the good time. They would love to sing and dance no doubt, but not in the foreseeable future.
Instead, for Sweety, these events are a much-awaited opportunity to hand out pamphlets and raise awareness about Twisha’s medical condition.
Sporting a brave smile, the single mum is on an ambitious odyssey – to find a permanent solution for her very only child through a life-changing surgery. With this aim, she has launched Mission Twisha, a multi-pronged fundraising campaign that desperately seeks to raise $800,000 for the project.
Effervescent, naughty and attention seeking, the adorable Twisha might seem like any other two-year-old to the average onlooker. Her pretty frocks and cherubic demeanour hide a heart-wrenching tale, the twenty-seven-month old cannot eat normal food and is not likely to, unless she can access urgent correctional surgery. For most human beings, eating is not just a much-savoured experience, but also a basic instinct.
Twisha suffers from a very rare medical condition called Long Gap Oesophageal Atresia (LGOA). She has already undergone over 20 major surgeries in the past 24 months and certainly received the best possible medical attention that Westmead Children’s Hospital can provide, but with limited success.
There is still a gaping hole in her food pipe. For the moment though, expert surgeons have fitted her abdomen with a little flap (gastronomy button) through which a nutritionally balanced baby formula is injected five to eight times a day. As a result of this, her weight gain is normal and she is generally healthy and happy, despite the surrounding trauma. She also receives “fake” oral feeds, a messy and laborious procedure, to keep her sensory reflexes alive.
Affecting 1 in 5000 children, LGOA is a congenital medical condition affecting the alimentary canal. Quite simply, the food tract fails to develop as a continual passage while in the womb and instead ends in a blind sac. It is identified at birth primarily through excess salivation and resultant choking or coughing.
Caused by abnormal embryological development, the reason for this birth defect is unknown.

Sanatana Dharma champion, disability campaigner, linguist, educator and activist Akila Ramarathinam has received many awards for her tireless community efforts. But it is as a caring mother of her two children Krishna and Santoshi, that she is best remembered.
An economics graduate, Akila had a bright future in the finance industry. But she sacrificed her career to give 100% of her time to her special needs child Santoshi. In 2000, Santoshi was diagnosed with autism and severe intellectual disabilities. Since then Akila has not only supported her own daughter, but has also helped many others find meaning in life. Her infectious enthusiasm and genuine smile have inspired many to pull through difficult situations.
Akila’s husband Ramarathinam and son Krishna, have been extremely supportive of her efforts. In fact, it was Krishna, who inspired his mother to turn the stumbling block into a stepping-stone.
As a mother of a special needs child, Akila has been liaising with various organisations looking after children with special needs and frail aged adults. Since 2009, she has been organising day camps every year for special needs children and adults. As a part of the camp, various services, networking, respite facilities and support group organisations provide information for the benefit of special people.
The Vishwa Hindu Parishad general secretary has been a resident of Australia since 1988 and has also completely dedicated herself to the Hindu cause, promoting awareness in the mainstream.
Akila has been the driving force behind various community projects across Australia in the areas of public education, special needs and community welfare.
“The eternal values embodied in our philosophy and the sacred texts are the source of inspiration for my projects. As senior members of the community, it is our responsibility to involve and engage the youngsters and pass on our rich cultural heritage. Awards like these are an indication that the VHP Australia team is getting recognised by everyone, and our work is going in the right direction,” Akila told Indian Link.
Known for her infectious enthusiasm, willingness and dedication, Akila joined VHP Australia as a committee member in 2007. Since then, she has overseen the recruitment and training of a wide network of volunteers, who have been engaged in a range of activities.
Not content with her extensive commitments in New South Wales, Akila has also been responsible for establishing VHP’s Victoria and Queensland chapters. As well, she has inducted many members to Hindu Youth Australia (HYA). Her gregarious personality has helped her connect with the young, just as much as the old.
A prolific speaker, Akila has participated and presented papers at various conferences across the globe including Parliament of World Religions, International Coordinators Meet, and the World Hindu Women’s Conference, to name just a few. She has coordinated two Australian Hindu Conferences held in April 2008 and April 2009. Both of these conferences were well attended by representatives of the Australian Government, Indian organisations, temples and overseas experts.
It was at these conferences that Sydney Veda Pathashala and Hindu Social Services Foundation were born, Akila pointed out. Today, the Sydney Veda Pathashala is the only institution outside India teaching Sanskrit through weekend classes. She is also working hard to reinstate oral chanting to its formal glory. Akila has also been instrumental in organising Ekadasha Rudra Japam, Mahaa Vishnu Lakshaarchana and Mahaa Shivarathiri events at events across Australia.
Likewise, she has helped expand the Hindu education portfolio. In 2003, Akila facilitated the Hindu Scripture classes under the special religious education (SRE) provision of NSW Public Schools. At NSW public schools, as many as 6,000 children attend Hinduism classes every week. She has been responsible for preparing curriculum, coordinating and liaising with principals, as well recruiting and training voluntary teachers.
The Bala Samskar Kendra has been another pet project of Akila’s. Introducing children and young adults to all aspects of Hinduism through structured learning, the weekend schools have grown exponentially, and have spread to many suburbs. She liaised with NSW Department of Education & Community Language Program division to obtain recognition for these schools and procure school rooms for conducting classes. Both BSK and SVP have hosted annual days, holiday camps and workshops besides regular weekend classes.

Nandini Thadani, nominated by daughter Preeti Thadani, Sydney
A big thank you to everyone who entered our Mother’s Day award!
- Advertisement -
Share
WhatsApp
Facebook
Twitter
Linkedin
Previous articleIndians and Australians marching side by side
Next articleCANCELLED