Sikh Heritage: A succinct and delightfully-photographed glimpse into the Sikh community 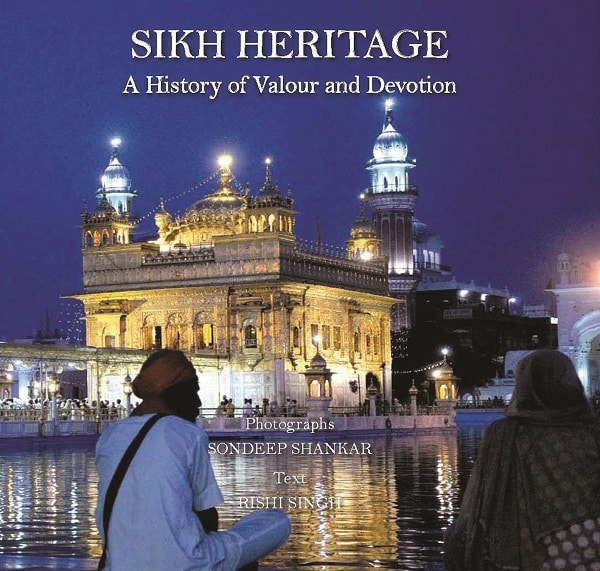 There have been plenty of books on Sikhs, their valour, their customs and their culture, but what makes Sikh Heritage: A History Of Valour And Devotion standout is that it encompasses not only Sikh history but also contains intimate accounts of all the 10 Sikh gurus, a detailed account of Harmandir Sahib (the Golden Temple in Amritsar) and the five ‘Takhts’ (temporal seats of power) – all in glorious colour.

Sikh Heritage, by Sondeep Shankar and Rishi Singh, is an invaluable guide for today’s generation particularly in the diaspora – of who their forefathers were, what they fought for and the traditions that need to be continued.

What hits you in the face, even to a Sikh like me, is the meticulous care with which the gurdwaras and their artefacts have been lovingly preserved and continue to be maintained as if they were crafted just the other day. All this by a community that represents just 2 per cent of India’s population “but their faith’s contribution in maintaining peace in our society and offering support to those who are most in need is second to none,” Hardeep S. Puri, Urban Development and Civil Aviation Minister, writes in the foreword.

Sikh Heritage is a collaborative effort between renowned photo-journalist Sondeep Shankar, who has published, among others, a 10-part series on various aspects of Sikhism, and Dr Rishi Singh of the School of Oriental and African Studies, University of London, and was also instrumental in the execution of www.canadiansikhheritage.ca under the auspices of the University of Fraser Valley, British Columbia.

How did it come about?
“Working as a photojournalist in 1980s-90s, I was engaged in closely covering Punjab and the Sikh community during those challenging times. Observing the Sikh community closely, I got quite fascinated by them and decided to continue covering various facets of the community after normalcy in Punjab,” Shankar told IANS.

“I began making several visits to the state especially Keshgarh Sahib at Anandpur Sahib and Golden Temple at Amritsar. As more opportunities came my way, I photographed the Sikh community, their festivities, fairs, sports, their manuscripts, Sikh regiments, Sikh relics, forts and palaces and rare relics and artefacts at Toshakhana of Golden Temple,” he added.

This work involved climbing to snow-clad Hemkund Sahib not once but twice in the same year. Travelling and exploring personal collections in Lahore, Lahore Fort Museum, Faqir Khana Museum, Nankana Sahib, Panja Sahib and other Sikh sites spread all over India required a lot of time on the road. Most of the photographs were taken in the pre-digital photography era, hence a lot of time was spent preparing for just one shot.
Shooting inside some very dark areas in forts and palaces was challenging and required utmost concentration for colour correction, a basic requirement for film-age photography. Often, the time allowed for photography was very restricted and monitored, Shankar explained.

“It is a lifetime’s work for me, and I felt that on the auspicious occasion of 550 years of Guru Nanak Dev’s birth anniversary, these exhaustive photographs published in the format of a well-designed book would be the most appropriate tribute towards the celebrations,” he added.

Rishi Singh was equally humble in his response. “While writing this text, it was a humbling experience to engage with several centuries of the Sikhs’ journey and their history. I feel blessed to be able to contribute in words towards this amazing book that has come out so well,” Rishi Singh told IANS.

To what should be ascribed the love and care that has gone into preserving and maintaining the gurdwaras and their artefacts?

“There is no denying the fact that, among people, there is an increasing consciousness about the cultural and historic landscape in Punjab, however, there is a further need of on-ground management of historical edifices and objects. In the past, many heritage buildings have been lost due to the recent fast-paced lifestyle and rapid urbanization. This needs to stop. The Government needs to have more engagement with conservation architects and allocate budget for them at the state and central government levels,” Rishi Singh explained.