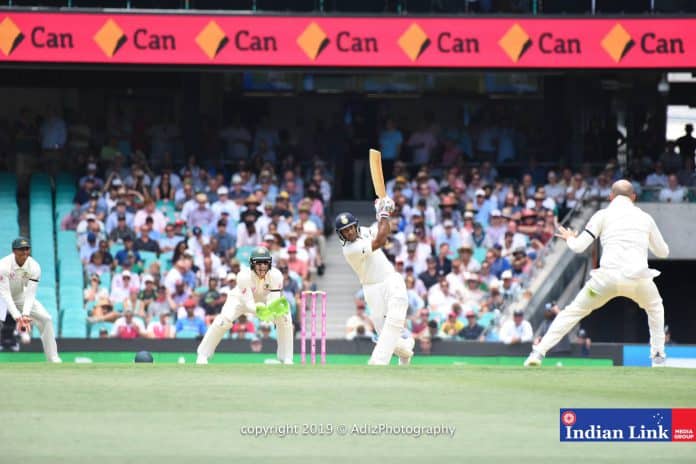 Has India finally found the blueprint to overseas success? That was the question on everyone’s lips on Day 1 at the SCG as the game unfolded, at least for the first part, in an eerily similar fashion to India’s historic win at the MCG. After Virat Kohli won a critical toss – following which Australia’s odds of winning the match ballooned out to $3.40, given the Indian captain’s undefeated record after winning the toss – India bossed the day, thanks once again to a simple willingness to be patient.
India began uncertainly following the early loss of the out-of-sorts KL Rahul, but normal service promptly resumed as Pujara once again began his seemingly singular mission of grinding the Australian bowlers into the dust. Pujara, who finished the day on 129*, joined Gavaskar and Kohli as the only Indian batsmen to have scored 3 or more centuries in a single tour of Australia. Although his century came off 199 balls – a rollicking pace by his recent standards – Pujara has now faced 1132 balls in the series, and it is entirely possible that, with another innings under his belt in this match, he will cross the record 1203 balls faced by Rahul Dravid in the 2003/04 edition of the Border-Gavaskar Trophy.
Pujara’s measured approach has formed the cornerstone of India’s success in this series and it seems increasingly remarkable that he was dropped from the side ahead of India’s first match in England this summer. It was not long ago that he was criticised by team management for scoring too slowly. It only seems now that India finally appreciate the jewel they have in him; after all, with strokeplayers such as Agarwal, Kohli, Rahane and Pant around him, India can easily afford the circumspection.
While Pujara is at the peak of his powers in his 68th Test, you could be forgiven for glancing at the Pujara-Agarwal partnership and assuming that Agarwal was the senior statesmen, such was the latter’s assurance and confidence at the crease. In his three Test innings to date, opening up against one of world cricket’s best attacks, on tracks bouncier than those to which he is accustomed, Agarwal’s lowest score is 42.
Agarwal was tested throughout his innings by the short ball. Promisingly for him and for India, he managed to adapt, abandoning his initial approach of riding the bounce (as he would have in India) and opting instead to sway and duck. Having weathered the storm, Agarwal looked almost bored against Nathan Lyon, smashing the off-spinner for two sixes before going for one too many and throwing away a certain century to finish on 77. He will have learned from the disappointment, but will be buoyed by his success so far.
The Australians who, along with the local media, have been focused only on dismissing Virat Kohli, did not seem to have a plan for any batsman other than the Indian captain, who was out for 23 in unfortunate circumstances. This was no more evident than against Hanuma Vihari, who, back in his preferred number 6 position, plundered 39* off only 57 balls as the Australian bowlers wilted in the final session.
Tomorrow will be a hot day in Sydney, and Kohli has no incentive to declare. His team, at 4/303, already has a hand on a historic series victory; but led by Pujara, they also have their feet firmly on Australian throats.
See our pics from Day 1 here.