Young violinist to perform with Australian World Orchestra in India 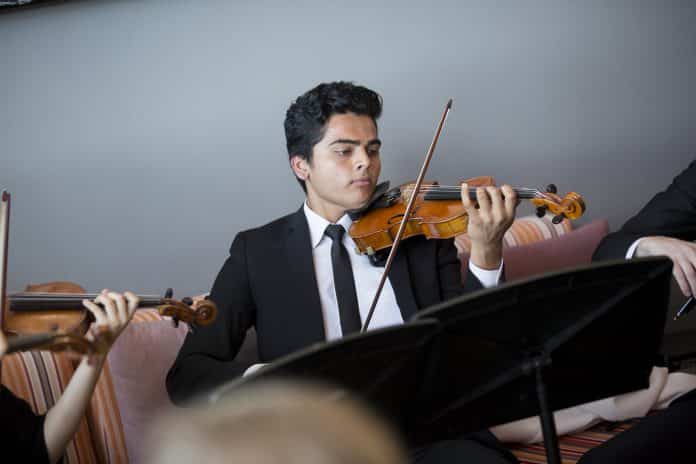 Western classical violinist Sagar Nagaraj has been invited to perform in India later this September as part of the prestigious Australian World Orchestra (AWO).

Each year, the AWO Academy offers emerging musicians a place in the orchestra for a fully immersive, touring experience. The invaluable opportunity includes professional mentoring, rehearsals, travel and tour with the orchestra as well as performances during the concert season. “It is a huge honour,” Nagaraj, who is a member of the Willoughby Symphony Orchestra and Woollahra Philharmonic Orchestra, told Indian Link.

“There is really nothing I can compare this with. I am just profoundly grateful for this opportunity to join an orchestra that produces an incredible sound. I have been following them and attending their concerts since their inception in 2011. Simply watching them play, I can see the decades of experience each player has with their control over the sound – playing in perfect synchronicity even the most challenging parts of the music. I expect playing with them to be an exhilarating, life-changing experience. I am simply seeking to learn as much as I can from these musical experts and incorporate it into my own style of playing, to become the best player I can be,” the early career professional added.

AWO’s upcoming India tour will be a highlight of ‘Australia Fest’, which celebrates and showcases the focus by Australia on India following the visit of former Prime Minister Malcolm Turnbull last year to deepen the bilateral ties in the cultural sphere and build on the people-to-people links that are vital to promoting mutual understanding and respect between the two countries.

Led by Artistic Director and Chief Conductor Alexander Briger AO, the tour returns to Chennai and Mumbai, besides a maiden performance in Kerala of a western symphony orchestra.

In conjunction with Mehli Mehta Music Foundation (established by Zubin Mehta), the group will also deliver workshops and outreach music education programmes in Mumbai, culminating with a performance by the students and AWO together on stage at the Tata Hall, NCPA in Mumbai.

This year’s education programme will extend to the Centre for Autism India in Kerala, where the AWO education team will travel to Tiruvalla to conduct workshops and performances with the children and their teachers to enhance both experiences and opportunities. All proceeds of these concerts will go back to educational and charitable organisations.

Nagaraj, who commenced playing at age of eight, has been extensively involved with the Sydney Youth Orchestras since 2012, playing as Associate Concertmaster for the Philharmonic Orchestra, and principal Second Violin for the flagship orchestra under esteemed Australian conductors like Matthew Coorey, Fabian Russell, Max McBride, and Alexander Briger.

It was during this time that his love for orchestral playing was fostered and paved the way for further opportunities such as playing with the Australian Youth Orchestra, Australian International Symphony Orchestra Institute, The Metropolitan Orchestra and at the Four Winds Festival in Bermagui. He has also had the opportunity to perform in Europe as guest concertmaster of the Schweriner Jugendsinfonieorchester and Orchestre Symphonique du Conservatoire de Bordeaux.

Currently completing Bachelors in Psychology, Nagaraj regularly plays in chamber music concerts throughout Sydney. Alongside his performing and academic duties, he conducts various string ensembles in public schools and teaches violin. Equally proficient in German, he is also assisting research into the effects of brain stimulation on musical improvisation.

“Playing in an orchestra requires dedication and preparation. Dedication to the instrument and the music – making sure you are on top of your part in the pieces and are able to play everything and be flexible to different ways of playing the same piece,” he explained.

“One must also be highly organised and prepared for every rehearsal, so that one can be depended on and maintain a professional level of playing. The symphony orchestra is like a high functioning machine, and if a part is loose or not functioning well, it gets replaced before the machine is compromised,” he added.

According to the high achiever, core skills like time management and concentration are crucial for survival in this field.

So what is his typical schedule like? There is no real ‘average week’ for me, he pointed out. I find that in some weeks my ‘academic’ side takes priority, and on other weeks my musical side does. The ‘academic’ part involves completing assignments, weekly readings, and generally staying on top of university commitments. Other weeks are filled with concerts and recitals, (either performing or watching) and practising – so finding an overall balance for my activities is definitely not easy. Nagaraj therefore believes in taking each day as it comes.

“I have a general idea of what I need to achieve by certain deadlines, but the rest I leave up to my impulses and judgments. They have served me well before.”