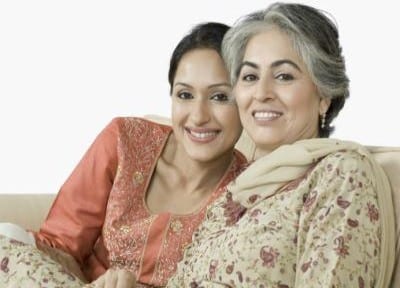 For families that have seen discord between mothers and adult children, the upcoming Mother’s Day may be the perfect opportunity to make amends

For centuries, traditions have placed the mother in a role that is seen as the ultimate in giving love unconditionally. Stories abound about a mother’s love; whether it is as Madonna and child or the Goddess in her many forms in Hindu mythology.

In an age when equality of gender is the prime point of discussion in politics, society, religion, and sports, there is no denying that there is still a special place for mothers. Even if it is just for one day of the year, mothers have a special place in everyone’s heart. Whether it is a single rose or a box of chocolates, the gift that says ‘Thank you’ says it all. Most mothers appreciate the time you have given to them, even if only briefly.
At the end of World War I, Ataturk gave a speech which is now engraved in stone at Gallipoli: “You, the mothers who sent their sons from faraway countries, wipe away your tears; your sons are now lying in our bosom and are in peace.”
The authenticity of this speech has recently been questioned. However, there is no denying the fact that the loss of a child is deeply felt by a mother.

We laugh at the television series Some Mothers Do ‘Ave ‘Em as the bumbling protagonist creates disaster after disaster. We speak the phrase, “God couldn’t be everywhere, so he created mothers.”  Yes, mothers get the bouquets and brickbats. The unflinching motherly love conquers all.
Whether it is the mother hen who protects her chicks come what may, or the ugly crow who looks to its young one as the most beautiful in the world, a mother never betrays her child. The power of the cord that binds them together as one, with the child for weeks inside the mother’s womb, is never really cut as long as she lives.
Recently, well-known author Nikki Gemmell, who candidly discusses emotions experienced by women on many taboo subjects, bared all in her book After. She reveals her own rollercoaster ride with emotions and issues that are rarely spoken about. Gemmell, a high-achieving, outspoken author, reveals frankly and poignantly the breadth of emotions she faced after learning her mother had taken her own life.

Her mother had been critical of her, she notes, but in hindsight, she had become deeply aware that distancing herself from her mother had made her blind to her mother’s own issues. She talks about the hidden ‘guilt’ many women feel about the paucity of time they spend with their mother. Sadly, as she says, this revelation comes quite often much too late.
There are many young women who regularly disagree with their mothers about various things. Often this is put down to ‘the generation gap’, ‘living in the past’, or being too concerned about ‘what others may say’.  Many stray away from their mothers, often through misunderstanding or not giving the time to understand where their mother’s thinking comes from.
This results in lack of contact that hurts mothers more than their adult children. Unable to see where they have failed their children, these mothers spend hours alone questioning, ‘Where did I go wrong’?
Nikki Gemmell’s book explores many more issues than a mother’s death and a daughter’s reactions to it. Most importantly, a clear message to take home is making amends before it is too late, trying to understand a mother’s predicament when faced with disagreements, and the pain of isolation, especially as one grows older.
There may be women who have grown through very difficult times in their family of origin and may replicate these for want of knowing no better. History does not have to repeat itself. All of us have to start somewhere.

Perhaps an awareness of the importance of creating a healthy family life with forgiveness and compassion becomes very pertinent in modern times.

In a recent speech Pope Francis beautifully spelled out the role of families and the importance of forgiveness in creating a healthy family.
He clearly explained the importance of forgiveness and the emotional destruction that may result in the hurt and guilt when one does not forgive. Let go and let us forgive, so our lives may be filled with ease of mind and joy and healing, he said.

There are many mothers who have seen generations grow in quite different circumstances to their own. They are proud when a daughter or son or grandchild achieves great accolades or simply has an opportunity that they themselves never had. There is much pride, affection and love as they vicariously live through the achievements of their family.
Humble loving is the mother’s way. Love them back and share the precious moments you have together.