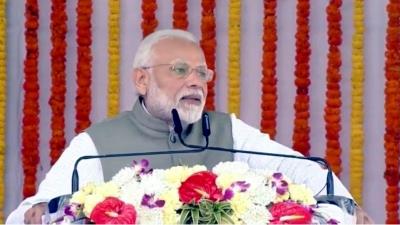 Modi has over 53 million followers on Twitter, making him the third most popular on the social media site with only US President Donald J. Trump (73 mn) and former US President Barack Obama (113 mn) ahead of him.

On Facebook however, Modi was the most followed leader globally with over 44 million followers, while his closest was Trump who had 27 million followers. Modi’s popularity on Facebook was such that even the US President that it was difficult to take on the Indian leader.

Trump had in February said, “And I congratulated Prime Minister Modi. I said, ‘But, you know, you have 1.5 billion people. I have 350 million. You have an advantage.”

Trump though maintained that he was number one on Facebook and Modi was second. “Prime Minister Modi is number two on Facebook, number two. Think of that. You know who the number one is? Trump. You believe that? Number one. I just found out,” Trump said during his commencement address at the Hope for Prisoners Graduation Ceremony in Las Vegas.

Some BJP leaders on condition of anonymity also dropped hints on the same lines suggesting that an internal message was doing the rounds that BJP karyakartas and followers should join NamoApp’s Swadeshi platform #MyNetwork and give vent to their voice, feelings and emotion. Will NamoApp’s #MyNetwork be the platform on which Indians can create their profiles and exchange messages and ideas? With iconic PM Modi’s endorsement, will he first personally migrate to an Indian social media platform to be followed by a multitude of his countrymen?

READ ALSO: Modi’s India: Many against the few