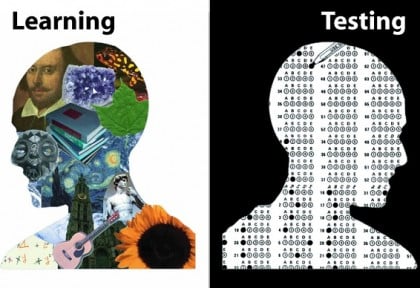 Different sectors are shifting the blame for Australia’s falling international rankings, losing sight of the varying needs of students

There have been many competing messages about education and the problems in schools arising from the release of Trends in International Mathematics and Science Study (TIMSS) results and OECD Programme for International Student Assessment (PISA) results over the past few weeks. It is not surprising that parents and students may be confused by the mixed messages. At this time of year, tired and seeking a break, it is timely to pull the disparate voices together.
In terms of variation and complexity, many vested interests have provided commentary, each providing a partial truth.

Australia’s federal Education Minister, Simon Birmingham blamed teachers for the falling standards, despite presiding over a portfolio delivering falling funding. Of course, outsourcing the blame is something that politicians can do extremely well. Teaching standards have, however, been rising nationally with the advent of Professional Teaching Standards and with universities generally raising their entry standards.
The unions suggested that far more funding needs to be given to schools. Any revelation of falling educational standards is met with a call from this sector for more resources and greater investment. However, the call for more money comes despite hundreds of millions of dollars of additional funds being met with falling student outcomes. This is evident from annual comparisons of domestic data from NAPLAN, as well as time-based analysis of PISA and TIMSS international data results. On what basis should more funding be directed to schools not held accountable for falling standards?
Parents have been lamenting the simplicity of bygone days, suggesting that a crowded curriculum is responsible for the falling standards. Moreover, they say a lack of emphasis on basic skills in literacy and numeracy are leading to poor student outcomes. Teachers, they say, have to do everything for everyone, and simply do not have the timetabled time to teach rigorously. However, parents too have less time to spend in educating their children and are increasingly allowing educators to mask simplicity behind complex references to outcomes, value-adding and the like.

Distractibility is also said to be an issue, with educational psychologists suggesting that that the digital age has assisted in creating a decline in capacity to focus and think deeply. This, they argue, is the biggest single battle confronting growth and learning. Evidence from most classrooms is that students do find it hard to maintain focus if separated from their digital devices. However, teaching itself often utilises digital technologies. So a question arises as to whether educators themselves are valuing stillness and focus in classrooms.
A more serious analysis of the results details that the vast difference between schools and systems creates a framework for inequity that engenders falling average standards, despite the best and brightest achieving at remarkably high levels. This, of course, is mainly true only when these high achieving students are in schools where there is funding, and a high achievement culture is the expectation. For schools situated in communities characterised by a high level of socioeconomic disadvantage, there is a vastly disproportionate number of children who never overcome low achievement. This is, in part, due to a culture of low expectations and a lack of accountability for those paid to address the issues and remediate the issues.

There is also the view that standardised tests themselves actually focus teacher attention in a way that constrains how they teach and what they teach. Standardised tests do help to compare student achievement on the content and skills assessed. However, there are issues around whether standardised tests are measuring aspects of education worth measuring, and further, whether comparisons made should be framed around the high variability between schools, schools systems (independent, public, religious, parent-controlled and the like), regions, states and even nations. Certainly it is true that there is a very high degree of variability between schooling systems and analysis should reference such disparity.
In light of the competing claims and varying emphasis provided by different stakeholders, it is no wonder that the general impression is one of confusion and a lack of clarity. Indeed, working within different sectors it is easy see merit in each of the views presented, notwithstanding that there is more to each position than detailed in the popular media.

One thing should be evident from the mixed messages. Education is widely valued and, as a nation, we are highly vested in seeing the system work. That there are forces pulling in different directions should be enough to make all educators and stakeholders ask, “What is the purpose of education?”

If that question is held as central, then it should not be too hard to assess whether perspectives arise from self-interest or, in the alternative, from placing the needs of all students foremost, regardless of socioeconomic status.
Brave re-imagination may be required, including articulating the idea that building capacity for change in a fractured system with strong sectoral interests will take time.
Holding the notion that education matters most, an evidenced rather than self-interest based approach is likely to deliver a clear message: students and their learning matters. A nation seriously interested in addressing falling standards would, from the highest levels of government, find ways to invest wisely, following a model of accountability.