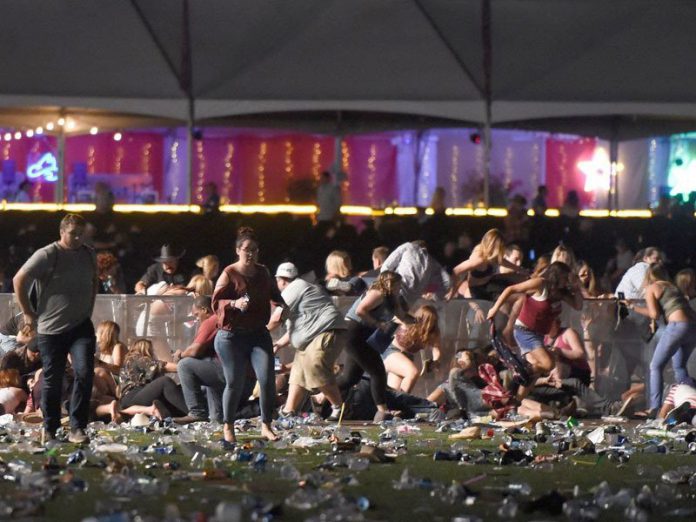 It’s easy for us to convince ourselves that this time, things will be different. This time, because so many perished, because hundreds were injured, because the guns were so powerful and the violence was so relentless: this time, lawmakers will be compelled to respond.
Much has been made of the uniqueness of Stephen Paddock’s merciless rampage on concertgoers at the Route 91 Harvest music festival in Las Vegas last weekend, particularly given his apparent lack of motive, his negligible criminal record, and the fact that the guns Paddock used were obtained, and modified, legally.
The harsh reality for Americans though, is that Paddock’s systematic slaughter of innocent civilians was, in many ways, rather trite.
Just over 5 years ago, a Colorado gunman shot dead 12 people and injured dozens more during a midnight screening of The Dark Knight Rises. James Holmes – who had no criminal record – had legally purchased each of the firearms, and the 7,000 rounds of ammunition, he used during his assault.

Within months of the Colorado shooting came perhaps one of the most senseless non-war mass murders in recorded history – the slaying of 20 schoolchildren and 6 staff members at Sandy Hook Elementary School in Connecticut, by 20 year-old Adam Lanza.
Lanza had no criminal record, and like Holmes before him and Paddock thereafter, Lanza was legally entitled to purchase the rifle which he used to murder his victims (although Lanza only obtained access to the rifle earlier that morning after murdering his mother, who owned several guns).

Even though the quintessential “thoughts and prayers” were offered by all concerned parties at the times of those shootings, and no doubt also to varying degrees following more than 1,500 mass shootings that have since followed, the gun control debate in America continues to fester along political lines.
The much-cited right for American citizens to bear arms is enshrined in the Second Amendment set out in the Bill of Rights, which provides that a “well-regulated Militia, being necessary to the security of a free State, the right of the people to keep and bear Arms, shall not be infringed”.
The concept of civilian militias was certainly relevant during a civil war context where, for various reasons, standing armies were not trusted, and it was preferred that citizens would bear arms to protect the land. But today, the US has a powerful standing state military – the largest permanent armed forces ever assembled – and the need for civilian militias has long subsided.
Relevant too, are considerations regarding the advances in firearms since 1789, when muzzle-loading muskets could, at best, fire 2-3 rounds per minute. In Las Vegas, Paddock was firing up to 9 shots a second – nearly 300 times as fast as the guns available at the time the Bill of Rights was documented. The capacity for today’s weaponry to cause unimaginable devastation in a short period of time is clear – in the 11 minutes during which Paddock fired his quasi-automatic rifle, he injured or killed one person nearly every second.
It’s hard not to imagine that the framers of America’s Constitution would be turning in their graves if they saw the way the Second Amendment was being interpreted today.
Among advanced countries, Australia and America stand out like beacons – while Australia, with its notoriously strict firearms legislation, sees 1.4 homicides by firearm per 1 million people, the United States endures nearly such 30 homicides. The United States does share one significant similarity with Australia, but it’s not a helpful one: the United States Constitution is incredibly difficult to change. And in the current global political climate – where bipartisanship is as rare as a hen’s tooth – amending the constitution is a practical impossibility.
Changing the Bill of Rights does not involve simply passing a majority vote in the Congress. First, both houses of Congress (each of which is currently controlled by the NRA-backed GOP) would have to propose a constitutional amendment, requiring a two-thirds majority in each house. The proposed amendment would then be submitted to each of the states for ratification, where the legislatures of 75% of the states must then ratify the amendment (sometimes, within a certain period of time) before it becomes part of the United States Constitution.

Many American civilians are misguided by the roots of their own Constitution, but taking away firearms is not a viable option in a country where freedom, liberty and firearm ownership are so inherently intertwined; untangling that web will take generations of grassroots, sociocultural change. Legislating to protect the lives of citizens isn’t an all-or-nothing measure, though: limiting the purchase of large volumes of ammunition, cutting down on private gun sales, and tightening restrictions on purchases of firearms by mentally unstable individuals are all achievable without depriving the fundamental liberty so craved by the 36% of the American population who currently own guns.
In fact, the protection of its citizens is the most fundamental task of any government – and right now the US Congress is failing its citizens enormously.

* America is home to 50% of the world’s civilian-owned guns, but has only 4.4% of the world’s population.
* More than 100,000 people are shot in America every year, while about 30,000 are killed by guns.
* Since and including the Civil War, nearly 1.4 million Americans have died on the battlefield. Since 1968, more than 1.5 million have died due to firearm violence.
* Americans are 25 times more likely to be killed with a gun than people in other developed countries.
* Considering lost wages and hospital expenses, the annual monetary cost of shootings in America could be up to $45 billion.