Sydney, or Mumbai? It’s a swathe of blue in the crowds as India romp home at SCG 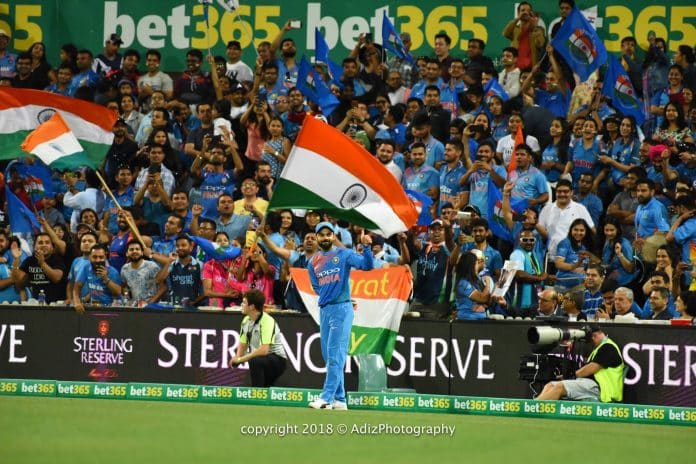 Reading Time: 3 minutesIn the 2015 World Cup semi-final between Australia and India at the SCG, the home team could have been forgiven for thinking it was playing on neutral ground, such were the sheer numbers of Indian fans. But in the third T20 between the same teams at the same venue, there was only one reasonable conclusion: India was the home team. Amidst the heaving swathes of Indian dholis, flags and ample doses of bhangra, India snuck home thanks to the King himself, with Indian captain Virat Kohli seating himself firmly on his throne down under.

The sea of blue might have been what prompted Australian captain Aaron Finch to keep Virat Kohli waiting at the toss, a sore spot between the sides ever since Sourav Ganguly famously antagonised Steve Waugh with the same tactic. After all, there was no need to make Kohli any more comfortable than he already was. It worked; Finch won the toss and elected to bat first.

Australia started strongly, with a threatening opening partnership of 68 between Finch and Short, but courtesy of a stunning passage of play, India picked up three LBWs in three balls – the first of which was overturned on review. From there, the Australians laboured to 161, thanks mainly to a generally abysmal fielding display by the visitors and some last-minute hitting by Marcus Stoinis and Nathan Coulter-Nile.
The unexpected star in the field for India was Krunal Pandya, who has bounced back brilliantly after being dismantled for 55 in 4 overs in India’s loss in the first T20I at the Gabba. Pandya finished with figures of 4/36, dismissing four of Australia’s top five and claiming the best-ever figures by a spinner in a T20I in Australia.
There was a sense that momentum was with Australia, given Australia seemed at one stage destined to limp to 140. But India’s openers quickly allayed any such fears, with a sparkling 67 run stand that came in just 5.3 overs courtesy of Shikhar Dhawan’s 22-ball assault for 41. Though the format of the game is vastly different, Dhawan’s electric form on his adopted home turf will make selectors think again about his axing from the Test squad.
Just when it all looked too easy, India suffered the middle-order wobbles that have begun to creep into their limited overs cricket. KL Rahul’s place is beginning to look untenable, while Rishabh Pant’s precociousness remains overshadowed by his immaturity. The former made a scratchy 14 off 20; Pant walked back to the pavilion after his very first ball.
But through it all, as he has been so many times before, was the master of the chase, Kohli. It was a perfectly paced innings of 61 by the Indian captain – of his first 50 runs, only 20 came in boundaries, an exceedingly low amount in this form of the game. But Kohli’s mode of attack is usually to begin with quick singles, stolen twos and rampaging threes. He finished with a crescendo of boundaries in the final over, given ample support by the increasingly invaluable Dinesh Karthik, who launched perhaps one of the biggest sixes of the night off Australian seamer Andrew Tye.
In the end, it was a comfortable 6 wicket win for India to level the T20 series 1-1, with Kohli finishing on 61* off just 41 balls – a glimpse of the tantalising feast of batsmanship ahead this summer.