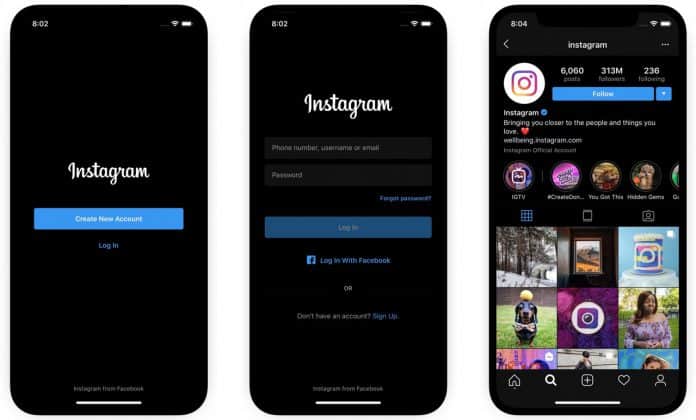 Facebook-owned Instagram has updated its platform, adding support for iOS 13’s dark mode. The update turns the entire Instagram interface dark including the feed, stories, the discover tab and the new design is a mix of dark gray along with black colour.

Other than a difference in look, dark mode on apps will also save battery on phones with OLED screens. Right now, only iOS 13 users can update their apps and get the new Instagram theme. One can simply find the latest update in the App store, if the app is not already set for auto-updates.

Instagram is removing its Following tab, the activity feed which displays what posts friends are liking, commenting on and following. The tab is going away from the app with an update later this week. According to Instagram’s head of product Vishal Shah, the tab was removed for the sake of simplicity.

“People didn’t always know that their activity is surfacing. So you have a case where it’s not serving the use case you built if for, but it’s also causing people to be surprised when their activity is showing up,” said Shah. Instagram launched its “Following” tab as an early feature back in 2011, long before its Explore tab.

Recently, Instagram has also rolled out a new mode called “Restrict” globally that will let users stop people who bully them via offensive posts or abusive comments. A user can restrict someone by swiping left on a comment, through the Privacy tab in Settings, or directly on the profile of the account you intend to restrict.

Instagram is introducing a new way for its users to help them identify phishing emails and safeguard themselves against hackers. The new feature by Facebook-owned photo-sharing service will display genuine emails the company sent you.

“Bad actors are getting better at imitating emails from Instagram, and it is becoming increasingly difficult for people to distinguish between a genuine email and a fake one,” an Instagram spokesperson said in a statement.

This is how it will work.

Go to settings and click on the security tab. There will be an option to see “Emails from Instagram.” One tab labeled security will show you a list of emails the company sent you. The “other” tab will display emails Instagram sent that aren’t related to security issues. According to Instagram, users shouldn’t click on a link in an email that appears to be from the company, if they can’t verify.