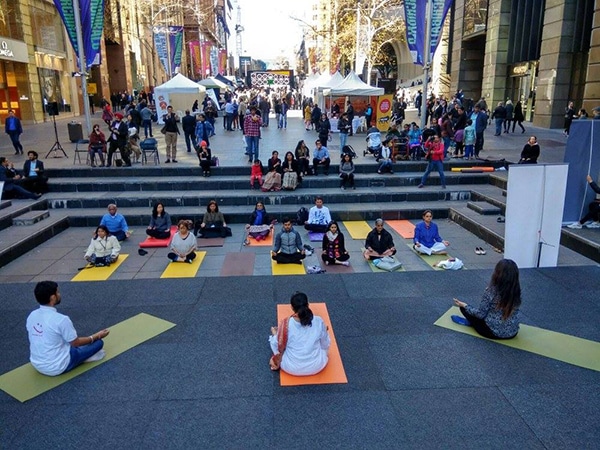 On a gorgeous winter afternoon, a little bit of India came to Sydney’s buzzing Martin Place.
As a lead-up to India’s 71st Independence Day celebrations on 15 August, the Consulate General of India organised India Day at the iconic venue on 8 August.
With classical dances, yoga, henna tattoos and lip-smacking food, the event was a showcase of India and a start of the Sydney community’s celebration of India’s Independence Day.

The event sought to attract the lunch crowd and be an advertisement for India to the diverse community. And while it did succeed in doing that to some extent, one would have liked to see more non-Indian faces in the crowd. Better marketing – some popular Bollywood music, perhaps? – may have got more attention.
Consul General of India in Sydney, B Vanlalvawna, along with NSW Multicultural Affairs Minister Ray Williams and Parramatta MP Geoff Lee, kicked off the proceedings by greeting Indians on its upcoming Independence Day.

The main event got off to a traditional start with a Ganesh Vandana, salutation to the Indian elephant god, performed by Nartana School of Dance. This was followed by a salutation to goddess Saraswati by Rasika Dance Academy.
The smattering of non-Indians in the crowd did find the event interesting. Johanna Mueller and her husband Ulf, visiting from Germany, filmed both the performances on their camera. “Although I did not understand the words, the dancers were very coordinated and graceful. It’s a good mixing of cultures,” she said, gesturing with an interlocking action of her fingers.

Philip Kerr, a retiree, was excited when told that many of the traditional dances are performed even today in temple courtyards in South India. “May be me and my mates ought to make a visit (to India),” he remarked.
Meanwhile on stage, a yoga demonstration by Art of Living taught participants all about meditation and other relaxing poses.

Mikaela Newing waited patiently in line to get a henna tattoo, her first ever. “I’ve never been to any such event, but it’s a good way to showcase a culture. I had seen a woman with beautiful henna on her hands at a wedding, and wanted to try it out,” she said.
The food stalls got the longest queues, drawing passers-by with the wafting aroma of curries, sambar, naan and chai.

There was a rather puzzling break on the activities on stage, when it should have remained alive with performances during the course of the event.
Nonetheless, the activities onstage resumed with a fusion dance performance by Rumki Mukherjee who presented Odissi to a mashup of the Game of Thrones theme and Ed Sheeran’s Shape of You.


In a way, Rumki served as a representative of the new India, that is steeped in culture but is still willing to adopt the best of the West. While she was dressed in traditional attire, her openness to bring in new elements to the classical dance form was refreshing. The crowd erupted on finding something exotic (the dance) set to the tune of something relatable (Shape of You.)
The organisers also used the occasion to showcase India as an attractive business destination. A screen played promotional material about various initiatives of the new government such as Make In India, Digital India and so on. The acclaimed – and goosebump-inducing – Incredible India ad also grabbed many eyeballs. The India Tourism stall, no doubt, benefitted from it.
The stalls of various PSU banks and Air India also got a fair few visitors and inquiries.

All in all, it was a good branding exercise for India. Helen Kaur, another visitor, summed it up well when she said, “Such events are important as they boost India’s image. We should have such programmes more often.”
Clearly, there is interest out there, but perhaps the authorities must ensure that they fulfil the intended aim of engaging with the mainstream, rather than attracting a largely Indian crowd.