Finding a cure for Kush 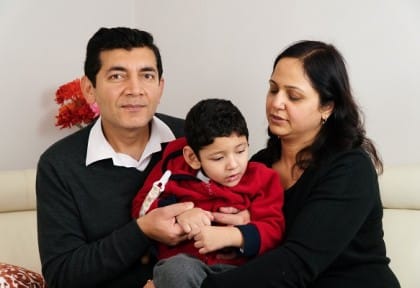 A brave Sydney family throws all its resources towards saving a young child with a rare genetic condition. SUDARSHAN ARVIND reports

When Glenwood toddler Kushagra Singha was diagnosed with the FoxG1 syndrome in March 2015, he joined just 213 others around the world with this extremely rare genetic condition. The shock diagnosis came after eighteen months of constant tests.


Suffering from uncontrolled seizures and developmental delays since he was six months old, it was finally identified that little Kush had the c. 946 del mutation, a genetic phenomenon altering the function of the FoxG1 gene, which provides the blueprint for the protein “forkhead box G1”.
This protein plays a key role in embryonic brain development, influencing the formation of the telencephalon, a region of the pre-birth brain that ultimately develops into the cerebrum. A principal part of the brain, it controls the majority of voluntary activity as well as language, sensory perception, learning and memory.

The mutation involves the deletion of important genetic material in the DNA carried by cells in the body, preventing the formation of forkhead box G1 protein and disrupting its normal function.
In fact, Kushagra’s particular mutation was the first of its kind to appear in any medical database or published findings. The disease impairs brain development, movement and speech. Symptoms include enlarged ventricles in the brain, irregular involuntary muscle movements, microcephaly, cortical visual impairment, reduced immunity and muscle tone as well as swallowing issues.
Currently, there is neither treatment nor cure for the disorder, with certain medication only offering temporary relief from seizures. Speech, vision and occupational therapy allow some of the developmental issues to be addressed.

“At first, it was very isolating because we had no one to turn to, who could understand the situation,” Vivek Singha and Monika Manhas, Kushagra’s parents explained.
“When Kushagra was finally diagnosed with FoxG1 disorder, we scoured the internet and struggled to find any information that would ease the pain and provide hope for our future. We found nothing but confusing papers on genetics. It was a harrowing time,” Singha added.
Overcoming the initial phase of shock, disbelief and denial, the couple found comfort speaking to parents of similarly afflicted children in the US through a Facebook page and resolved to improve awareness and access to information for Australian families.

They started the FoxG1 Australia Foundation and made it their mission to “increase awareness, accelerate medical research and provide support to families”.
A registered charity, the Foundation seeks to promote the management, cure and prevention of FoxG1 syndrome in Australia by facilitating medical research and education as well as providing access to treatments when they become available, enabling and supporting clinical trials of new and emerging treatments for FoxG1 syndrome, and offering support for individuals diagnosed with FoxG1 Syndrome.
The FoxG1 Foundation has worked closely with Dr Fabien Delerue from UNSW’s Dementia Research Unit to set up a research scholarship at the internationally renowned institution for studying pathomechanisms underlying FoxG1 syndrome in transgenic mouse models.

The research award costs about $105,000 and while money for the first year’s scholarship has already been raised, funds still need to be raised for the second and third year.
Vivek and Monika have organised a multitude of musical and cultural programs to sustain the campaign, having also held numerous fundraising barbecues with the assistance of Bunnings Rouse Hill and Blacktown, and taken part in charity drives and fundraisers.
Acutely aware of the uphill battle ahead, they have now turned to the wider Australian community for help and support as they embark on this journey into the unknown.

“We are deeply indebted to the Indian community in Sydney and Melbourne for rallying behind Kush’s cause and donating generously but we have miles to go,” Manhas told Indian Link.
“We’re not just asking for money but also support because we don’t want parents or children to go through what we’ve gone through with Kush.”
In the meantime, the couple firmly believe that research efforts will produce a gene therapy cure for FoxG1, given that the condition is associated with a single gene only.
“Being a single gene disorder, we are very hopeful that a cure will be found shortly,” Sinha said. “We would welcome you to join our journey to find a cure for Kush and connect to other families and understanding our predicament.”
For more visit foxg1.org.au
- Advertisement -
Share
WhatsApp
Facebook
Twitter
Linkedin
Previous articleMirvac launches new community in Donnybrook
Next articleDoyen of digital disruption