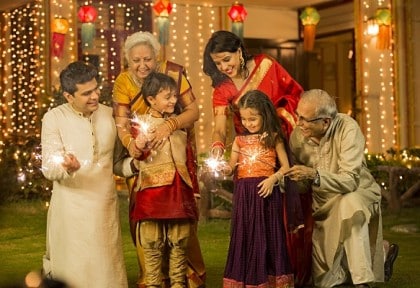 Can you name the five days of Diwali celebrations?

Diwali is one of the most important events on the Hindu calendar, though in India it is often celebrated across the country, stretching far beyond cultures and religions. Diwali is all about feeling light – spiritually and emotionally. Traditionally, there are five days of Diwali, though most migrant Indians in Australia do not participate in all five days of rituals. However, each of the rituals of Diwali has significance and a story to tell. Indeed, the festival gets its name Deepavali, or Diwali, from the rows (avali) of lamps (deepa) that people use to light up their homes with a sense of joy.

The origins of Diwali

The origins of the Festival of Lights vary according to the different regions of India, though in the most popular legend, according to the epic Ramayana, Diwali began as a celebration at the return of Lord Ram. After 14 years of exile, and defeating the demon king Ravan, Lord Ram returned to his kingdom. The people of Ayodhya celebrated his arrival by illuminating the kingdom by lighting earthen diyas and letting off firecrackers to welcome their King.
From the Sikh perspective, Diwali is celebrated as the return of the sixth Guru, Guru Hargobind from the captivity of the city Gwalior. To commemorate his undying love for Sikhism, the townspeople lit the way to the Golden Temple in his honour.

For Jains, Diwali is also one of the most important festivals. On this occasion they celebrate the Nirvana of Lord Mahavira who established their dharma.
In both India and Australia, indeed across the world, the illumination of homes with lights, and the skies with firecrackers at Diwali, is an expression of respect to the deities for health, peace and prosperity.
Some believe the loud sounds of the firecrackers are supposed to indicate to the gods the joy of the people on earth. A more scientific belief is that the smoke and fumes produced kill many insects and mosquitoes which are plentiful in India after the monsoon rains!

The days of Diwali

On this day it is said that Lord Dhanwantari came out of the ocean with Ayurveda, the science of medicine, for the benefit of mankind. This day marks the beginning of Diwali, or Deepavali, celebrations. People hang up their lanterns and decorations to mark the arrival of the season.
The word ‘Dhan’ means ‘wealth’. Dhanteras is considered a highly auspicious day to make new purchases and investments. It is also considered good fortune to purchase precious metals like gold, platinum and silver on this day. Women are encouraged to buy new clothes and utensils. Indeed, this is the day most people complete their Diwali shopping.


On this day, at sunset, Hindus should bathe and offer a lighted diya with prasad (sweets offered at worship) to Yamraj, the Lord of Death and pray for protection from untimely death. Others will hold Ganesha Pooja on this day.

It is said that on this day, Lord Krishna destroyed the demon Narakasur and made the world free from fear. On this day, people are supposed to massage their bodies with oil, rest, and relax so that the main festival of Diwali, the following day, can be celebrated wholeheartedly.
In preparation for the main event, homes are tidied and fastidiously cleaned. Women adorn entranceways and courtyards with intricately designed rangolis, to welcome guests and create an inviting reception for Goddess Lakshmi. People may also draw tiny footprints of the Goddess Lakshmi on the floor using rice paste, to indicate that the Goddess will be respected and welcome in the home. In the evening, Lakshmi Puja is performed with great Aarti and Bhajans.

This is considered to be the main day of Diwali and is the day most families in Australia celebrate together. People wear new clothes and share gifts and sweets with their friends and relatives. Today is the day you can indulge in the mithai guilt free!

Hindus worship the Goddess Lakshmi to achieve the blessings of wealth and prosperity, and celebrate the triumph of good over evil and light over darkness. Women prepare delicacies and whole house is illuminated with diyas and candles.
In India, fireworks and crackers light up the streets. Here in Australia, given the strict laws that govern the sales of fireworks, we have to wait until the melas.

This is considered Hindu New Year’s Day. In the northern states of India, this day is celebrated as people worship Govardhan. On this day, it is believed, thousands of years ago Lord Krishna asked the people of Braj to worship this sacred hill. From then on, every year Hindus worship Govardhan to honour that first Govardhan Pooja.

This day is also observed as ‘Annakut’, meaning ‘mountain of food’. Devout worshippers stay awake the whole night and cook either 56 or 108 different types of food for the bhog (the offering of food) to Krishna. At the temples, the foods are offered to the deities in a practice known as Annakut Darshan. The food is blessed and offered as prashad to the people who come to worship at the temple and to the poor and needy.
In modern times, however, it could also refer to all the food leftover from the previous day’s festivities!
On this day, the young are supposed to bow and touch the feet of their elders to gain blessings. Money, gifts or clothes are also exchanged.

The final day of Diwali, Bhai Dooj is dedicated to the love between brothers and sisters. If Raksha Bandhan is brothers’ day, then this is ‘sisters’ day!’

It is said that on this day, Yamraj visited his sister Yamuna. He gave her a blessing that whoever visited her on this day would be liberated from all sins and achieve Moksha (final liberation). In commemoration of this, brothers are supposed to visit their sisters on this day to enquire about their welfare, and lavish them with gifts and blessings. In return, sisters symbolise their love by putting an auspicious tilak or a vermilion mark on the forehead of their brothers.
In India, the devout faithful may bathe in the waters of the Yamuna to mark the occasion!