Championing Sydney on the world stage 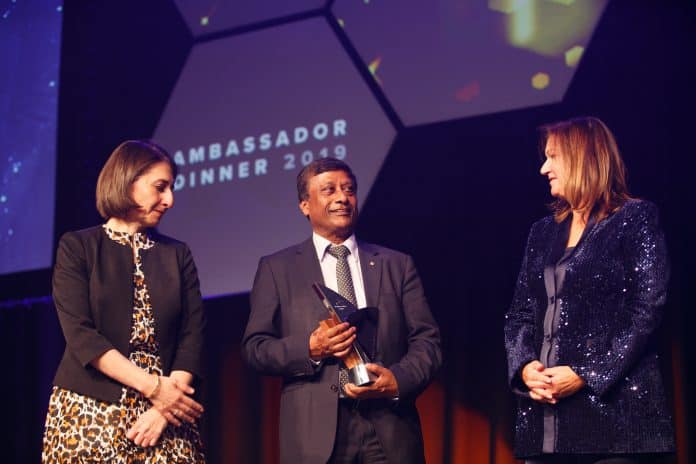 Receiving accolades is not new for Professor Deo Prasad AO, a Scientia Professor at UNSW’s Faculty of the Built Environment.

However, being presented with the Global Impact Award at Business Events Sydney’s 10th Anniversary Ambassador Dinner at the International Convention Centre at Sydney in late November, came as a pleasant surprise.

It was presented by the NSW Premier Gladys Berejiklian to thank him for his generous support as a Sydney’s Global Ambassador, since the program began ten years ago.

The conference industry is now a truly a global industry. Every year, cities the world over vie to be chosen as host for a variety of conferences and business events.

Deo Prasad and these four eminent Sydneysiders are part of a cohort of more than 100 Global Ambassadors, influential people from a variety of sectors, who champion Sydney on
this world stage.

For Deo Prasad, volunteering his time and expertise to give Sydney the leading edge comes easily. As one of Sydney’s longest serving Global Ambassadors, he has supported 37
bids to attract global meetings to the city by meeting bid decision-makers and facilitating introductions, while advancing his academic field of sustainability and low-carbon
buildings globally. Potential bids identified by him represent more than $50 million of future direct expenditure for NSW.

Explaining his role as an ambassador, Deo Prasad says, “Conferences bring tourism and business for the state. Sydney not only competes with Australian cities like Melbourne but
also, international cities like Singapore, Seoul and Shanghai. I am happy to lead bids in my area of expertise and guide the next generation of ambassadors take a leadership role in bidding for conferences”.

To subvert the risk and uncertainties involved in running a conference, he also helps by getting sponsors and getting people to underwrite the event.

Deo Prasad has championed sustainability throughout his long career. In 2004, he won the Renewable Energy Champion Green Globe Award. In 2014, he was appointed an Officer of
the Order of Australia for services to sustainability and renewable energy.

Another feather in his cap was leading the Cooperative Research Centre for Low Carbon Living (CRCLCL), the largest ever collaboration between industry, government and
universities.

With the closure of the CRCLCL this year, next on the cards for Deo Prasad is the bid for a new the Future Cities Cooperative Research Centre (CRC) and he is eagerly waiting
for the government announcement to make this a reality. This CRC will look at the world of digital data, including cyber security for cities, how better evidence-based data can be used
for integrated planning of new cities such as the ‘Aerotropolis’ coming up in Western Sydney, urban heat effects, climate resilience and like issues.

The Future Cities CRC aims to look at not only the technology aspects but also how climate affects liveability, health and well-being of communities. Making people a key metric in design of better cities is the question that he says their research will tackle.

Since 2015, Deo Prasad has been exploring opportunities for cooperation in science and technology and opportunities for partnering on the Smart Cities initiative with India. Soon after speaking with Indian Link, he was off to Delhi to attend and present at the 11th GRIHA summit, organised by The Energy Research Institute (TERI) in India. “India is ahead in some ways on this front. We have a lot of capability here in Australia and I am trying to share globally the ability and the technologies we build. Being on the front foot we can together chart the way forward,” he says.