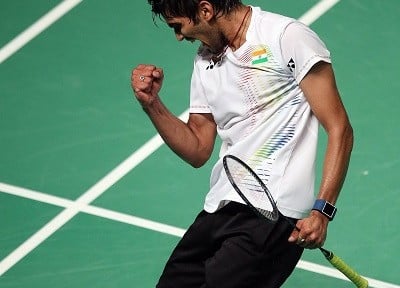 India’s top-ranked shuttler Kidambi Srikanth made it to the semi-finals of the Australia Open Super Series after defeating fellow Indian B Sai Praneeth in Sydney.

Recently-crowned Indonesia Open champion Kidambi Srikanth continued his brilliant run in the Australia Open Super Series made it to the semi-final of the event defeating fellow Indian shuttler B Sai Praneeth at Sydney.

Srikanth defeated Praneeth in a men’s singles quarter-final match of the $750,000 tournament amd made it to the semi-finals with a 25-23, 21-17 win in a match that lasted for 43 minutes.
Praneeth, who defeated Srikanth in the Singapore Open final in April, started the first game on a strong note, opening a healthy lead of 9-6 but Srikanth fought back to make it 10-10 and went into the break with a slight advantage of 11-10.
Meanwhile, India’s campaign in the women’s singles category in the event ended after defending champion Saina Nehwal and shuttler PV Sindhu crashed out of quarter-finals in Sydney.
Saina went down to sixth-seeded Sun Yu of China in a quarter-finals match.

The Chinese shuttler beat Saina 21-17, 10-21, 21-17 in a match that lasted for an hour and 19 minutes.
Sun Yu dominated the opening game taking a 8-4 lead before extending it further to 11-9 at the break. Saina, however, made a strong comeback after the break and went ahead 15-13 before Sun Yu gained eight straight points to pocket the game.
In the second game, Saina surged ahead taking six straight points to lead 7-3 and went to the break at 11-4. Coming back, Saina never allowed the Chinese shuttler to settle and extended her lead to 18-10 and easily winning it 21-10.
The decider witnessed fierce battle between the two shuttlers splitting at 4-4 and then going neck and neck till 9-9 before Saina took the lead at 11-9.
Post the break, Sun Yu took three points in a row to make it 12-12 and then went ahead with six straight points to make it 19-15. She kept her nerves and didn’t allow the Indian free her arms to run away with the match 21-17.
Earlier, Saina’s compatriot PV Sindhu also lost her quarter-finals match to World No.1 Tai Tzu Ying of Chinese Taipei.