Cruising down the Nile 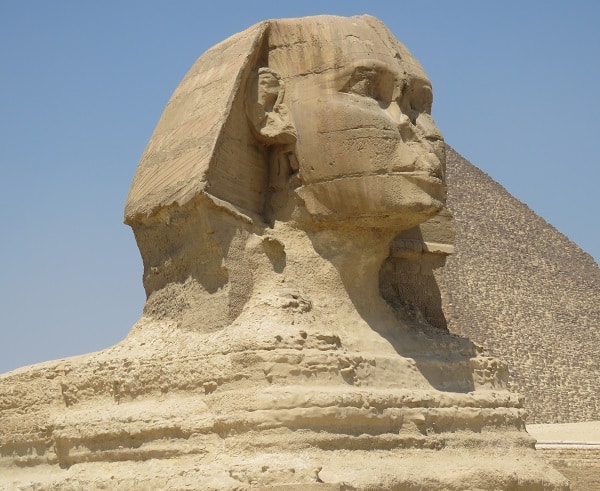 The longest river in the world, the Nile stretches for 6,700 kilometres and in September when I traveled there, the days were still blisteringly hot.

I’d joined a Peregrine tour of Egypt, beginning in Cairo, with an excursion to the pyramids and Sphinx at Giza, the Cairo Museum to view the golden mask of Tutankhamun and other priceless treasures, the Mosque of Mohammed Ali, Saladin Citadel and the ancient souk Khan el-Khalili, crammed with textiles, perfume and a bewildering array of kitsch souvenirs including plastic pyramids.

After boarding an overnight train and arriving at 5.30 am in Luxor, a city on the east bank of the Nile River in southern Egypt, our small group of six were the first to enter the spectacular Temple of Karnak, a vast open-air temple complex that honours the gods of Osiris and Iris, an ambitious construction dating back to 2055 B.C.

We then set off for Luxor Temple, where standing between two statues of Ramses II, you are overwhelmed by the detail and grandeur around you. Next day we visited the West Bank and the Valley of the Kings, arriving at dawn to view several of the ancient tombs dug deep into the ground, including Tutankhamun’s tomb, all reached via narrow tunnels.

The Temple of Queen Hatshepsut is breathtaking in scale, and the Colossi of Memnon are massive stone statues that once guarded the gates of this ancient Egyptian city.

Returning mid-afternoon, I set off to explore the bazaar. Overwhelmed by zealous vendors, I retreated to the serenity of the grand Luxor Palace Hotel for hibiscus tea, the hallways and public rooms filled with antiques and memorabilia.

As our cruise boat set sail, the sky across the West Bank was lit up in shades of blue, pink and yellow, best viewed from the upper deck, before dusk turned to night.

Next morning on arriving at Edfu, I visited the famed Temple of Horus, the falcon god, by a horse-drawn carriage. Thanks to the desert sand that covered it for centuries, the temple built between 237 and 57 B.C., is one of the best-preserved ancient structures in Egypt.

That afternoon I watched life pass by on the river as we cruised towards Aswan, a southern Egyptian city – fishermen casting their nets, egrets flying overhead, banana and mango trees, green fields of wheat, and a landscape of villages along the shoreline. At night fall we arrived at Kom Ombo where the main temple rises upwards. It was here that crocodiles rested in a bend in the river and so a temple was built in 181 BC, one part dedicated to Sobek, the crocodile god, and one to Horus. It wasn’t just pharaohs that were mummified, the crocodiles on display were too.

On our arrival in Aswan, considered the gateway to Africa, we took a motorboat to Philae Temple, built on an island and dedicated to the goddess of love and healing and mother of the universe, Isis.

Next day we explored Abu Simbel. When Lake Nasser was created, the two temples were painstakingly transported by an international relief effort, piece by piece to their new location, a three-hour drive away across a sparse and barren desert. The Great Temple of Ra-Harakhte, with its four giant statues of Ramses II, and the Temple of Hathor dedicated to Queen Nefertari, are well worth the journey.

Dogged for years by political unrest and terrorist attacks, Egypt’s tourism industry is slowly recovering and the benefit of going now is that there are few tourists to crowd your way.

While itineraries offered by tour operators on the Nile are similar and ship exteriors cookie cut in design, the main point of difference is in the level of creature comforts offered on-board. Our boat was comfortable, with contemporary décor, a sundeck with swimming pool, and cabins with floor to ceiling sliding doors, balcony railing, and large bathrooms.

My last afternoon in Aswan turned out unexpectedly. After shopping at the bazaar, loaded with Nubian wall hangings, jasmine and rose scented perfume and a large bag of hibiscus tea, I arrived at the historic Old Cataract Hotel, the setting of Agatha Christie’s Death on the Nile, for afternoon tea.

But the doorman wouldn’t allow me to enter, so I returned to my hotel and began chatting to a woman from Florida, recovering from amoebic dysentery. She had wanted to cleanse herself by drinking the waters of the Nile. That may have been ill advised, but there is something sacred about the Nile that you feel when you see it for the first time.

Our last night was spent at the home of a Nubian family, on an island of brightly painted mudbrick homes dating back centuries. A wedding was in progress in the village, with dancing and drumming, and our night ended with a felucca ride along the Nile – a traditional wooden sailing boat – the sails billowing against the wind.

Egypt, the ancient land of the pharaohs, is stunning, and the Nile that provides water to more than 300 million people from 11 African countries, is no less so. Lounging on a deck chair on the upper deck, I was treated to views of ancient citadels as a backdrop to one of the world’s oldest civilizations, an extraordinary river journey unlike any other.

Fly to Cairo with Etihad via Abu Dhabi or Emirates via Dubai.

Egyptian cuisine is delicious, with influences from North Africa, Middle East, and the Mediterranean, featuring grilled meat, and meze-style salads and dips. Try Koshari, rice and pasta with beans, tomato and onion.

A visa on arrival costs US$25 cash. The currency is the Egyptian pound. ATMs are widespread. Sites may charge a camera fee, mobiles are free. Drink bottled water and use hand sanitizer liberally.