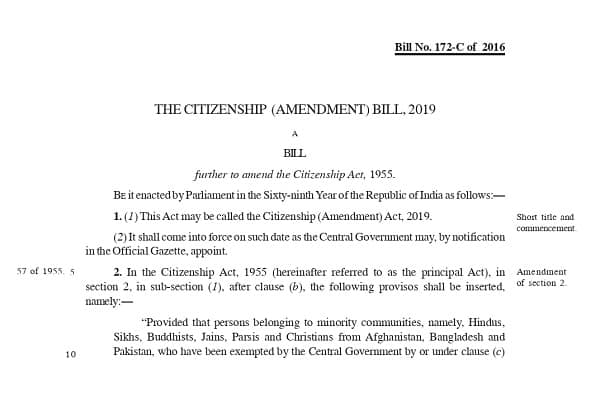 The controversial Citizenship (Amendment) Bill 2019, which seeks to give Indian citizenship to non-Muslim refugees from Pakistan, Bangladesh and Afghanistan, was passed in the Lok Sabha on Monday midnight though it was vehemently opposed by the major opposition parties which described it as “anti-Muslim”.

However, the government rejected the opposition’s claims, saying the Bill does not affect the Muslim community residing in the country.

The draft legislation was passed after division of votes with 311 in its favour and 80 against it, following a marathon debate which continued till 12.06 a.m. on Tuesday after beginning at about 4 p.m. on Monday. A total of 48 Parliamentarians took part in the debate.

The Citizenship (Amendment) Bill 2019 would now be moved in the Rajya Sabha on Tuesday to cross its final hurdle before becoming a law to provide Indian nationality to Hindus, Christians, Sikhs, Parsis, Jains and Buddhists fleeing persecution in Pakistan, Afghanistan and Bangladesh.

The Treasury benches called it a historical Bill while the opposition dubbed the move as one to “kill secularism and Constitution of India” and “another attempt of partition” in the country in the name of religion and “violation of Article 14 of the Constitution”.

In his concluding reply, Union Home Minister Amit Shah rejected the allegations of opposition members, saying the Citizenship (Amendment) Bill 2019 is a move to “end the atrocities against crores of migrants”.

“I assure that the Bill does not violate any article of the Constitution and that no citizen will be deprived of one’s rights. An attempt is being made to keep the Bill in bad light.”

“Every citizen has been given a place in the Bill on the basis of reasonable
classification,” he added.

The Home Minister said that the Bill has been taken after analyzing the Constitutions of Pakistan, Afghanistan and Bangladesh.

Referring to the Nehru-Liaquat Ali Khan agreement signed in 1950 after the Partition of India, Shah said it was agreed to protect the rights of minorities, but only India followed it. Hindus, Christians, Sikhs, Parsis, Jains and Buddhists faced atrocities in Pakistan, Afghanistan and Bangladesh, he said.

Shah clarified that the Muslim community was not persecuted in the three Islamic countries, and the Bill specifically mentions to provide citizenship to six religious persecuted minorities.

“The people of the six minority communities who migrated to India following religious persecution in Pakistan, Bangladesh and Afghanistan will be given Indian citizenship as per this Bill. They are being given citizenship on the basis of reasonable classification. The Bill does not violate Article 14 of the Indian Constitution,” Shah said.

He also said the Bill is not against the Muslim community and that if any Muslim seeks citizenship in India based on rules, he will be entertained as per the Article of the Bill.

He declared that Manipur would be brought under the Inner Line Permit (ILP) regime and with that the problems of all the northeastern states would be taken care of as mentioned in the Citizenship Bill.

The Home Minister reassured that no provision of Article 371 would be violated by this Citizenship Bill and the article will never be touched.

Shah said the provisions of the amendments to the Citizenship Act, 1955, which was enacted to provide for the acquisition and determination of Indian citizenship, would not apply to tribal areas of Assam, Meghalaya, Mizoram or Tripura as included in the Sixth Schedule to the Constitution and the area covered under “The Inner Line” notified under the Bengal Eastern Frontier Regulation, 1873.

The Bill, he said, also seeks to amend the Third Schedule to the Act to make applicants belonging to the six minority communities from the three countries eligible for citizenship by naturalization if they can establish their residency in India for five years instead of the existing eleven years.

Shah said the Bill no where targets India’s minority community, but illegal immigrants and Rohingyas would not be allowed to stay in the country at any cost.

The Home Minister said that there is no merit in the questions raised by members on the competence of the Parliament to discuss this Bill on the ground that it is against the basic structure and ethos of the Constitution. “I want to assure the nation that this Bill is not against any provision of the Constitution of India,” he said.

Shah also accused Congress of dividing the country on the basis of religion during Partition, saying “if the Congress had not done the Partition of the country based on religion, the government would not have brought the Citizenship Bill”,

Initiating the debate over the Bill, senior Congress leader Manish Tewari hit back at Shah for accusing the Congress for the Partition of the country on the basis of religion.

“I want to remind them that the idea of Partition on the basis of religion was first floated in 1935 in Ahmedabad by (Veer) Savarkar at a Hindu Mahasabha session, and not (by the) Congress,” he said.

Tewari said the Bill was against Articles 14, 15, 21, 25 and 26 of the Constitution, and against the basic right of equality. The Bill was also against the principles of B.R. Amedkar, he added.

AIMIM’s Asaduddin Owaisi tore a copy of the draft legislation in the Lok Sabha calling it “arbitrary in nature” and “against the Muslim community”.

“Another Partition is going to happen in the country. This Bill is against the Constitution of India and a disrespect to our freedom fighters. I tear the Bill, it is trying to divide our country,” Owaisi said.

What does the bill say?