Anirudh Kathirvel, a neuroscientist in the making 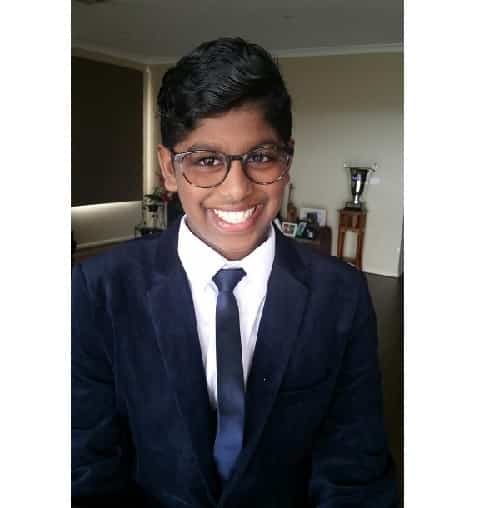 Haileybury College’s Year 7 student Anirudh Kathirvel may be just 11 years old, but he is no stranger to the public spotlight.
His past exploits are impressive; he was the champion of the 2015 Great Australian Spelling Bee and gained national recognition for his activism in public transport seating, pioneering the “Need a Seat? Ask Me!” badge initiative in 2016. Anirudh has now turned his attention to neuroscience, with no less success.
His 5-minute submission to the 2017 Brain Awareness Video Contest has been shortlisted into the Top Ten and has placed him in the reckoning for the People’s Choice Award.
The competition is run by the Society for Neuroscience, a US-based institution that represents the world’s largest organisation of scientists and physicians committed to advancing and promoting our understanding of the brain and nervous system.
Their Brain Awareness Video Contest encourages participants to submit a short YouTube video explaining a neuroscience concept in a simple and imaginative way, illuminating the wonders of the brain to a wide audience.

The Top 10 submissions are first shortlisted by a team of leading neuroscientists affiliated with the society, and the winner of the People’s Choice Award is subsequently selected from these entries through online voting open to all members of the public.
Working together with his mentor, Professor Trichur Vidyasagar from the Optometry and Vision Sciences faculty of the University of Melbourne, Anirudh explains the optical phenomenon known as binocular rivalry.
Relating to the idea of visual perception, the phenomenon occurs when our eyes are presented with two distinguishable images.

BINOCULAR RIVALRY
This is a phenomenon that occurs when our eyes are presented with two distinguishable images. Instead of seeing a combination of the two images, only one image is perceived while the other is completely supressed from our consciousness. After some time the other “rival” image takes its place, and we alternate between seeing the two images indefinitely.
In his video Anirudh explains how our understanding of this phenomenon can shed new light on the brain’s ability to adapt to changing circumstances

Instead of seeing a combination of the two images, only one image is perceived while the other is completely supressed from our consciousness. After some time the other “rival” image takes its place, and we alternate between seeing the two images indefinitely.
Anirudh also explores the various applications of binocular rivalry in neuroscientific research, explaining how our understanding of this phenomenon can shed new light on the brain’s ability to adapt to changing circumstances, as well as providing a scientific explanation of how our brain generates conscious experiences.
Anirudh has been passionate about neuroscience since completing a research project on the brain in Year 4. He is drawn by the inherent complexity of the field, describing the human body’s most important organ as a “complex machine” and suggesting that it is “harder to understand what’s going on in our heads than what’s going on in space”.
The budding neuroscientist first encountered the concept of binocular rivalry whilst preparing a submission for the annual Science Talent Search, conducted by Science Victoria and open to all primary and secondary students in the state.
The Brain Awareness Video Contest, however, presented him with an excellent opportunity to showcase his prodigious, scientific flair in a new medium.

Anirudh acknowledged that producing the video was certainly an extensive process, with filming and editing taking four days. He thanked the contributions of his mentor Prof. Vidyasagar, whose expertise was helpful in preparing the scripts, alongside photographer Anandh Bala, who provided the professional touches to the video’s production value.
Nevertheless, the Brain Awareness Video Contest is just the tip of the iceberg for the enterprising young high school student. Anirudh aspires to be a doctor in the future and aims to complement his medical studies with research in neuroscience.
At an age where fellow students are just being introduced to the ever-expanding realms of science and biology, Anirudh has already dabbled with human anatomy and other biomedical study areas through online courses run by the likes of Michigan and Harvard Universities.
See the video here: http://www.brainfacts.org/…/…/articles-folder/peoples-choice
Voting ends on the 29 September.