Greens candidate Navdeep Singh up against Premier in 24 Nov election 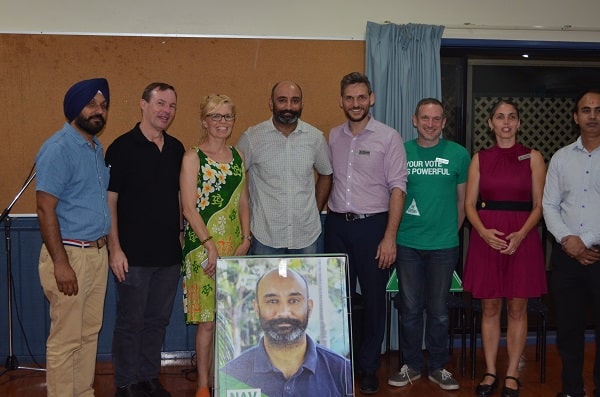 I met Navdeep Singh long before he was chosen as a candidate for the Greens in Inala constituency. It was in the garage of a friend’s place.
I had gone to this friend’s house to give him some Diwali sweets and his wife told me that he was at the back of the house, getting his car fixed by a mechanic. I was surprised that a mechanic would be making house calls in the afterhours and not charge an astronomical amount of money.
It was probably that ability to get his hands dirty, regardless of the time of the day, that endears Navdeep to hundreds of people, making him an ideal candidate for a region which has multicultural and multi-ethnic demography.
Hailing from Punjab, this unassuming man joins the limited number of people of Indian origin who have chosen to join Australian politics to make the collective voice of the migrant community heard by the different levels of government. A mechanical engineer by qualification, he has a disarming smile and many big ideas about issues that affect the migrant society in Australia.

What motivated Navdeep to join politics was the apathy displayed by political leaders towards the increasing bureaucracy in the visa grant process, and a feeling of being neglected and unheard after a series of job redundancies led him to open up his own small automotive repair business.
Having expanded his automotive repair workshop to two different locations, Navdeep Singh also joins the ranks of the very few politicians who can boast of a blue collar background. His postgraduate study of environmental engineering in 2007 brought him closer to the Australian Greens Party whose ideology on environment, public transport, rising electricity costs and migrants and refugees policies matched with his own personal views.  Working on minimal funding, Navdeep actively campaigns on Facebook and other social media to espouse various causes close to his heart and his party.
The main issue on Navdeep’s priority list is the increasing cost of electricity with absolutely no value addition in the recent years. He is equally concerned about traffic congestion and has a few different ideas that could help ease the traffic congestion in the heart of Brisbane city and his constituency of Inala.

Up against the Premier of Queensland, Annastasia Palaszczuk of the Australian Labour Party who has held the seat since 2006, and Leanne McFarlane of the LNP, it does look like a battle between David and Goliath.
However, going from the quiet and consistent confidence that Navdeep is known for, it would be interesting to watch the results of the Queensland election which will be held on Saturday, 25 November 2017.