Boxing Day Test Day 2: Where are the Australian fans?

On day 2 of the Boxing Day Test, the docile pitch claimed its latest casualty: the voices of Australian cricket fans. RITAM MITRA reports from Melbourne. 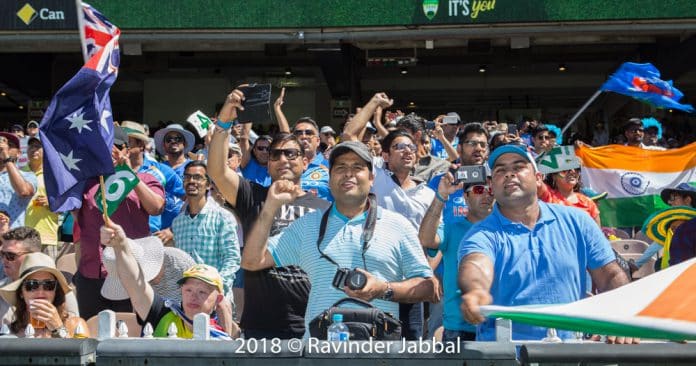 Reading Time: 3 minutesWhether due to the pitch, the generally diminished status of the national team or India’s painfully determined display of Test match batting, day 2 at the MCG has proved one thing: Australian fans have officially gone missing this summer, at least in voice.

Of course, there are still plenty of Australian fans coming through the turnstiles – today’s crowd, 36,524. But given the lack of noise from the Australian sections of the crowd, you would be forgiven for having wandered into the MCG for the second day’s play and assuming that the match was taking place at a neutral venue.
In years gone by, regular chants, cheers and jeers from Australian spectators were standard fare; a ‘Waltzing Matilda’ here, an ‘Aussie Aussie Aussie’ there. Yet this summer, and particularly at the MCG, a quiet slumber has generally prevailed, broken only by the occasional attempt at a Mexican wave.

In their defence, day 2 of the MCG may well have been one of the more dour passages of cricket witnessed by Australian fans on these shores. Already, the first day had produced the second lowest number of runs scored in a completed first day at the ‘G, and with only two wickets to show for it. If that was a meagre appetiser, the famine continued for much of today, with only 236 runs scored, albeit with the welcome respite of 5 more wickets and an unexpectedly aggressive declaration by Kohli late in the day. While Australian crowds have never needed an invitation to be loud and noticeable, this featherbed – and the obstinate Indian approach – was hardly encouragement.
Pujara and Kohli, unbeaten overnight, began as they left off yesterday, content to grind and frustrate. They did both: Australia bowled without luck, as edges flew between gaps, and top edges lobbed beyond grasp.

The fruits of Pujara and Kohli’s 170-run partnership from 68 overs were two-fold. First, the pair celebrated a sublime century to Pujara, his second of the series. The other reward was more than a mere milestone; the Indians claimed the tired legs of the Australian bowlers, whose discipline went largely unrewarded throughout the day.
The cracks finally started appearing – in both the pitch and in the Australian fielders – after Kohli fell to an injudicious upper cut shortly after lunch. On one hand, both Pujara and Rahane fell to deliveries that kept low, no doubt influencing Kohli’s decision to declare, with Bumrah, Shami and Jadeja amongst his arsenal. At the same time, the Australian players started doing something quintessentially un-Australian: dropping easy catches, on each occasion off Nathan Lyon.
In the space of 10 overs, Peter Siddle (as substitute fielder), Travis Head and Pat Cummins all shelling chances that they would have taken in their sleep in any other circumstances. Siddle’s drop benefitted Rohit Sharma, who compiled an otherwise assured 63* in his return to the side from injury, striking at a comfortably higher rate than any other Indian batsman. Rishabh Pant, who was dropped on 15 by Cummins, added another 24 in a high-octane stand of 76 with Sharma, helping India amass 443/7 before a surprisingly early declaration by the typically conservative Virat Kohli gave the match the breath of fresh air it so desperately needed.
Australia barely survived a tense 6 over burst by India, awash with outside and inside edges, plays and misses, and yet another ruined helmet for Marcus Harcus, whose inability to play the short ball will be well noted by bowlers around the world.
Day 3 promises to be pivotal; although India certainly can’t win the series tomorrow, they could go some distance towards retaining the Border Gavaskar Trophy.
See our photos from Day 2 here and here.