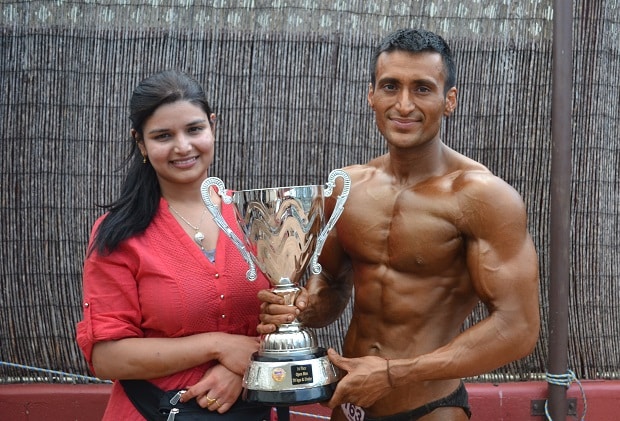 It was a moment of pure joy and relief for 30-year-old bodybuilder Amandeep Singh as he was finally crowned with the title of Mr Australia 2013 in the under-70kg category. The victory came after competing twice for the coveted title at the Australasian Natural Bodybuilding (ANB) competition in Sydney in 2008 and again in 2010, where he secured the runners up position. 2013 has been a special year for Amandeep as he won three different bodybuilding titles including the coveted national ANB award, and state awards from Victoria and New South Wales in the under-70kg category.
Speaking to Indian Link about his long journey from a small town in Punjab to competing on a national level in Australia, Amandeep says he has a lot more to accomplish in the field of bodybuilding, and this is just the start.
His mantra to success is consistency, patience and discipline when it comes to diet and training. “Bodybuilding is all about your state of mind and mental strength. The most crucial period are the weeks before a competition that can either make or break you. Only exercise is not sufficient to become a bodybuilder. To see changes in your body, you have to eat the right food and nutrients,” revealed Amandeep.
His interest in bodybuilding began at just 21. Ironically, the first time Amandeep went to a gym in his hometown of Banga in Punjab, he was insulted and ridiculed by a local bodybuilder. “I remember being taunted for my lean body when I was lifting weights and asked to go home by a bodybuilder in our local gym. That’s when I made up my mind that I will indeed become a body builder,” he recounted.
The turning point in Amandeep’s life was meeting his mentor and coach Ramakant Sharma who holds the title of Mr World (Middleweight) 2007.  Under Sharma’s guidance and training, Amandeep won Junior North India championships twice in 2003 and 2005.
“My guru Ramakant bhaji is my role model. I moved to Chandigarh from Banga and started training with him. I competed in fifteen other competitions at state and national levels,” explained Amandeep. “I was going to go into partnership with Ramakant bhaji (brother), I had already earned the financial backing and the goodwill I needed, but my plans to go to Canada or America to compete in bodybuilding competitions came to a tragic halt because of a family tragedy,” he said.
Amandeep’s mother and his greatest motivator, suddenly passed away from a heart condition in October 2006.  Amandeep found himself in Australia six months later, in support of his elder sister. He studied hard to finish a hospitality and management course during the day, and worked at a petrol station at night to support himself financially.
Despite no financial backing in Australia, Amandeep continued his training and met Rupi Hothi, another aspiring bodybuilder who became his training partner and a close friend. Together they trained for hours at the gym. And their dedication finally paid off. In 2008, Amandeep battled his inner demons to become the first Indian to win the Sydney bodybuilding runners up title at the prestigious Australasian Natural Bodybuilding (ANB) competition.
Amandeep received a lot of adulation for his unique routine by the judges and audience when he performed on Punjabi songs on the day of the competition. “I love playing to the gallery and showcasing Indian culture.  I have performed live on dhol beats, Bollywood songs like Singh is king and Shera the komb Punjabi which the audience loved,” he recalled.
Amandeep took a break from bodybuilding in 2011, when he married Manpreet Kaur. However he soon hit the gym again with encouragement from his wife and friends. Manpreet is his pillar of strength and single-handedly looks after his entire diet
Singh keeps a watch on everything he eats. His knowledge on food and its nutrients is remarkable. “Apart from intense training five to six days a week, I eat five to six meals daily. Every meal contains micro and macro nutrients, essential fatty acids, and essential amino acids and proteins which are a vital part of my diet,” revealed Amandeep.
His diet and training routine is not easy, but Amandeep has already made quite a few sacrifices along the way. He loves cricket but can’t play the sport as that can affect his weight and muscle symmetry.  He rarely eats out and can never binge-eats. “On my birthday I treated myself to cashewnuts which landed me in hospital. Unfortunately this incident occurred just a month before a competition in 2011, and I wasn’t fit enough to participate,” he recalled.
Based in Musswell Brook in NSW, Amandeep enjoys the simple, laidback life of the countryside with his family. He is employed at a machinery welding company during the day and works flexible hours so that he can dedicate enough time to his training. His boss and workmates also support his passion.
Amandeep Singh lives by the motto that one should dream big. Apart from bodybuilding, he is also interested in horses, thanks to friends who are jockeys and horse trainers. “I love watching the races and one day hope to own a thoroughbred winning horse,” he admits with a cheeky smile.
Now that he has won the title of Mr Australia on a national level, Amandeep’s next big goal is to represent Australia internationally. “I have given myself two years to bulk up and then take part in the under-80 kg category. It is my dream to win Mr World someday. God willing that too shall happen one day,” he said in conclusion.