Anoushka Shankar brought to Australia her new album Land of Gold, a touching, visceral response to the global refugee crisis 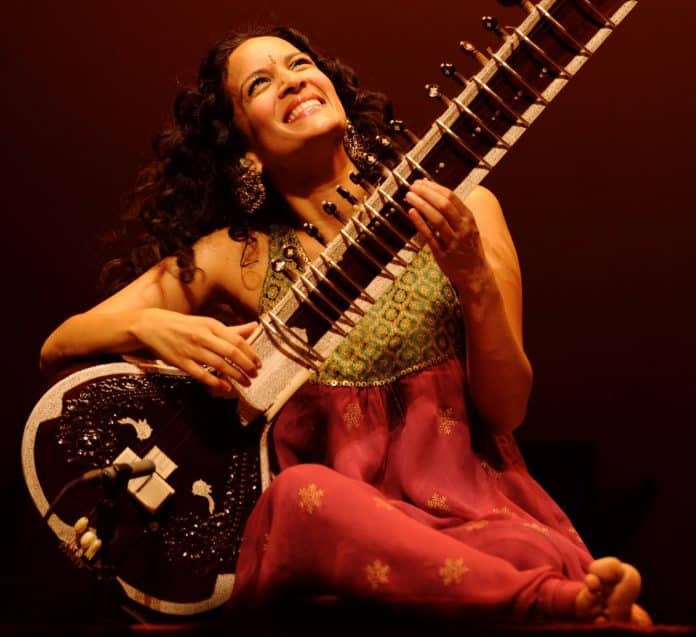 Reading Time: 3 minutesIt’s been eight long years of waiting to witness Anoushka Shankar perform live once more on Australian shores. She was last here on tour in 2010, along with her father, sitar maestro Pandit Ravi Shankar.

A lot has changed in these eight years – for example, Australia has changed way too many Prime Ministers – but Anoushka’s creative ingenuity in experimenting with the many ways in which Indian classical music can be presented to the world has remained not just steadfast, but seems to have increased with time.
Since 2010, Anoushka has released four albums, each markedly different in tone, sensibility and how Indian classical music is fused with global musical styles to give a truly unique offering. Traveller (2011) mixed Indian classical with Spanish flamenco, exploring how these two traditions so different on paper, might actually have the same spiritual DNA. Her next album, Traces of You (2013), brought about a memorable collaboration with her half-sister Norah Jones, with Norah lending her vocals to three tracks on the album.
However, if you are a ‘purist’ when it comes to Indian classical music (which you really shouldn’t be, but that’s a debate for another time), then Home (2015) might just be the album for you. I wouldn’t necessarily call it a return to her classical roots – because I don’t believe she ever left – but yes, it is an unadulterated display of what magic Indian classical music can create on its own. The raga khamaj in that album is to die for.
And this brings us to Land of Gold, her latest album, that she is currently performing material from on her return to Australia. Continuing in her journey to give audiences different entry points to Indian classical music, this album has a very different sound and sensibility to her previous efforts.
One of the more important elements that sets Land of Gold apart from Shankar’s other work – not disregarding the experimentation in musical sound – is that the album is a deeply visceral response to the ongoing global refugee crisis. The audience experiences each and every track with that humanitarian struggle in mind. Each track is like a window into the ongoing ordeal of the refugee experience and how it has been covered by the international media. Boat To Nowhere begins disarmingly but then takes a sudden, dramatic turn, becoming quite a dark piece by the time it ends. Remain The Sea has a passionate monologue by Vanessa Redgrave. A rap segment by M.I.A. plays on a loop in Jump In (Cross the Line).
On stage accompanying Shankar are renowned percussionist and hang player Manu Delago – who also co-wrote this album along with Shankar – bass and keyboard player Tom Farmer and shehnai player Sanjeev Shankar (who was a student of Ravi Shankar).

Delago’s skills as a percussionist stand out. The way he plays hang, modulating its sound to the extent that at times it has the effect of the tabla and at other, more docile moments, it also has the affectation of a jaltarang, is something to behold. Having shehnai in the setup is also a beautiful arrangement. The instrument has such a distinct sound quality that you can’t help but be drawn to it. The shehnai sections in Secret Heart will melt you and then by the time you get to the jugalbandi of sorts between Anoushka’s sitar and Sanjeev’s shehnai in Reunion, you really start to wonder why don’t you get to hear the shehnai more often in musical arrangements.
Tom Farmer (who looked ravishing in a kurta, just as an aside) comfortably switches back-and-forth between keyboard duties and the double-bass. You wouldn’t imagine that a sitar, shehnai, double-bass and hang would make for a complimentary musical sound, but not only do these very different musical sounds fuse and glide over each other seamlessly, they each let the other flourish and take the audience to a musical high. A lot of this is possible because of the calibre of the musicians on stage, each masters of their craft. But a special mention would go to co-writers Shankar and Delago, for having the vision and imagination to write pieces that could envision such different musical elements working together in harmony.
Witnessing the ensemble on stage performing is an ethereal experience. It might have been eight years since we last saw Anoushka Shankar in Australia, but trust me, it’s been well worth the wait.