Plenty of LOLs …. And some lessons 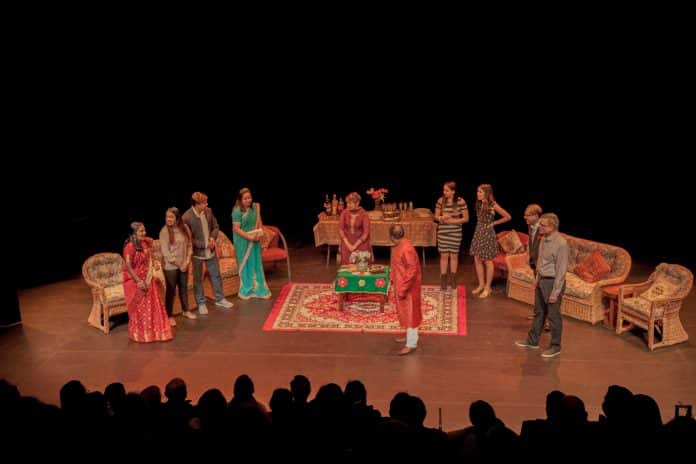 Reading Time: 3 minutesThe lights turn on. A harried homemaker rushes into view, fluffing a pillow here, picking up a stray magazine there, making sure the dining table has everything ready for guests while lamenting how these parties stress her out, how her daughter can’t wear a decent salwar kameez instead of a dress, how her husband isn’t helping and ‘oh god, would he please at least change out of that t-shirt’ because the guests (one of whom is visiting Australia from India) are due any minute. The said husband, meanwhile, laments, “Why do you host parties if they’re so stressful for you?”

As the scenes unfold one after the other, characters pour on to the stage, each with a story of their own with one common thread: an Indian in Australia. Written and directed by Jyotsna Jyoti, Andhi Daud is a Hinglish play by Vividha Arts that tells the stories of these migrants (and their Australia-born children) as they try to assimilate into the Aussie (individualistic) way of life but make a conscious effort not to sever ties with their Indian (collectivist) values. So one hand, you have an Indian mother, Rita (Malvika Thakur) who’s more than okay with her daughter Alisha (Tanvi Nangrani) having a ‘gora’ male friend, but goes into a tizzy when she finds out he might visit when she has Indian uncles and aunties over.
The other key characters include Rajat (Gulshan Sang), a haughty man who’s achieved success the hard way and expects his son to do the same, and Vijay (Manish Raj), a father who has learnt to give in graciously and allow his child to follow his dreams of becoming an actor. The adults and their children meet, talk about the challenges of living in a foreign country, complain about the concept of ‘gap year’, how their kids just won’t listen or study hard, and how “in their time, not listening to their elders wasn’t even an option”. The question Jyotsna tries to prompt is: where are we headed in this blind race? At what point should parents and children draw a compromise where they can both be happy? And most importantly: what is more important: success or happiness?

The production is relatable for a lot of people, specifically the parents. The writer couldn’t have done a better job of portraying the angst of Rita, who wants her daughter to study hard and become a doctor, “just like Renu aunty”. Alisha and Naveen (Kishor Nangrani, Malvika’s husband) give the most genuine performances: as the daughter who wants her mother to understand that she would “rather be a happy journalist than an unhappy doctor”, and as the pragmatic husband and father who’s caught between the mother-daughter relationship.
There are, as the writer promises, a few funny moments even if those are a direct reflection of our own lives – it’s funny because it’s happening to someone else for a change.
Yet, the play relies, perhaps too heavily, on stereotypes: the complaining mum, the submissive and placating wife who plays the go-between for the overbearing father and the bullied son, the parent who wants the child to become a doctor and scoffs at professions like journalism and acting. These are all stories we’ve heard before. There’s no denying that these tropes exist, but one would like to believe that Indian parents are much more open to change than they were a few years ago. To have only Vijay (Manish Raj) be that rational parent, seemed a tad unfair.

The dialogues and acting feel a bit stilted and over the top at times. The production could use a little more finesse in terms of actors’ responsiveness to lighting and props.
It’s easy to see why Andhi Daud is well liked. It mirrors the lives of many of us migrants in a new country. Does it entertain? Yes. Is there a lesson in there somewhere? Definitely. But the profundity is sadly lacking, because of which the lesson seems to get lost in the laughter.