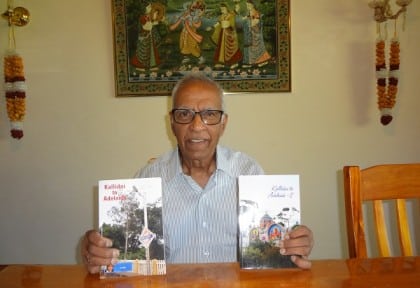 How do you celebrate a milestone birthday – 21st, 60th or 80th? That is left to individuals, their families, friends and well-wishers. One advantage we Indians have is that we have a chance to celebrate every birthday twice – the date of birth according to the English calendar and also on the day of our star sign. If you choose the former, it is more of a social occasion with scope for lot of spirits to flow; if it is a latter case, then it is spirituality wrapped around rituals.

Our contributor Lakshmi Pathi, who writes under the pseudonym of LP Ayer but is otherwise known as Laks, chose the latter mode when he recently turned 80. The truth is, it was his family that made the choice for him – to celebrate at the Ganesha Temple in an authentic manner.
“When you reach that stage in life, you either give in or are given the title GoM (grumpy old man),” says Laks having grudgingly agreed to go along with the gang.
However, he decided to add his own flair to the occasion – to produce his own book, as a present to all those present at the event.
Near and dear ones, some from inter-state and overseas, numbering around eighty, turned up.
The temple priest, after performing the ‘havan’ rituals, asked all the family members and friends to pour pitcher after pitcher of ‘holy’ water on the birthday boy and Jaya, his partner of 46 years, a kind of kindly dunking. That was followed by briefly re-enacting some aspects of their wedding including a re-affirming of those sacred vows taken at every Hindu marriage. Jaya proudly told the womenfolk that she was wearing the same Kanjivaram red silk saree she wore at her wedding four decades ago. Laks was a bit modest, saying that he was marrying the same woman he did so long ago.
Laks wanted to keep his book (Kallidai to Adelaide-2) project a secret, so he worked on it when his wife was at work, taking a whole week to select, re-edit and email to an overseas printer some forty articles from among the hundred or so he has written for Indian Link over the past six years.
His printer in Chennai promised to finish and freight the final product in a week’s time, just as he had done with his first book Kallidai to Adelaide in 2014. (Kallidai is the name of Laks’ birthplace in southern India). Laks was expecting to receive the book parcel the day before the birthday bash so he could place one copy in each thamboolam (bonbonniere) bag to be given to the guests after the ceremony.
Alas, the best laid plans of men and mice can go wrong. The consignment arrived a week later because of the intervening Christmas holidays.
“Justifiably, Jesus Christ’s birthday takes precedence over that of mere mortals like mine,” Laks laments.
So a special launch was held at the temple, thanks to its president Selva, on the temple anniversary day in the first week of February, a month after the book was supposed to have made its presence. Adelaide’s well-known ENT specialist Dr Suren Krishnan, releasing the book, made generous mention of the Pathi family’s contribution to the local Indian community – Laks having served as president of the Indian-Australian Association of SA twice, secretary of the Hindu Society for six years and also as an active promoter of South Indian classical music group Shruthi for over 20 years and, of course, Jaya continuing her GP practice for 44 years.
Kallidai to Adelaide-2 can be collected from the author for a nominal donation that goes to the temple as was the case with Laks’ first book two years ago.