A seat for those in need 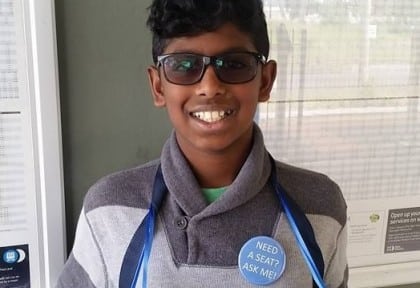 Need a seat? Ask me! Printed on a bright blue badge, the message can be read loud and clear. Commuters taking public transport in Melbourne can be seen wearing this badge to identify themselves as willing to relinquish their seat for someone in need.
The brainchild of 11-year-old Anirudh Kathirvel, the concept is both innovative and philanthropic, winning the appreciation of those commuters in genuine need who are otherwise deprived of a seat during business or peak hours of travel.

In 2015, young Anirudh entered the spotlight when he won the first series of the Great Australian Spelling Bee. A year later and Anirudh has embarked on a self-funded mission to promote goodwill on public transport.
Unlike most boys his age, who are occupied with toys, sports and other extracurricular activities, the Indian origin lad spends all his money making badges.
Having frequently travelled on Melbourne’s trains, there was a particular behaviour on the part of commuters that baffled him. Anirudh felt that some passengers “simply refuse to let go of their seats”. A common behaviour is that they are either glued to their phones, or doing something else that they “hardly ever bother to notice people around them or if they genuinely need a seat,” he said.

Having noticed these tendencies Anirudh decided to “promote a helping culture through non-verbal communication”. The inspiration for the idea was sparked by a story about ‘please offer me a seat’ badges being trialled on London’s trains.
“The London badges sort of labelled people with health conditions or disabilities,” Anirudh explained. “I thought about a reverse badge. Instead of distributing badges to people having special needs, I gave them to commuters willing to give up their seats to elderly, pregnant and disabled people.”
Anirudh’s movement has gained traction, and he plans to promote the badges through schools, as “It’s good to promote this through young people.”

The Year 6 student hopes to attract patrons who will help him print more badges, but also said, “It would be pretty nice if my idea was an inspiration to others.”
His campaign already has one enthusiastic supporter. “My dad takes public transport, and he proudly wears a badge,” Anirudh shared.
The youngster has so far given out around 300 badges, distributing them for free outside of Melbourne’s train stations, and also via social media.

Anirudh was recently joined by employees of Victoria Metro Trains at Melbourne Central station while handing out badges, and in support of this initiative Victoria Trains will sponsor the next 500 badges.
In celebration of the International Day for People with Disabilities on 3 December, there will be a booth set up for badge distribution at Flinders Street Station in the heart of Melbourne.
In Sydney, the Physical Disability Council of NSW will organise a badge distribution on Monday 5 December at Central Station.
As a primary school student, Anirudh only has the weekends for badge distribution. When he first spoke to his parents about the idea of badges, they helped him print his first set, and started the campaign on his birthday as per his vision.
For his 10th birthday Anirudh helped raise $3000 for the Royal Children’s Hospital.

“When Anirudh comes up with these initiatives, as parents, we need to be supportive both emotionally and financially to help him reach his goals,” said Prith Kathirvel, Anirudh’s father.
“We need volunteers to help out to distribute so it reaches as many people as possible,” he said. “Finance is another problem as this involves ordering badges and posting badges across Australia.”
Anirudh’s local Keysborough dentist was the first to chip in, offering him a $150 cheque which was used to cover the cost of postage, while Senthil Vel, a family friend, has shown his support and ordered another 500 badges.
Anirudh’s goal in the future is to study neuroscience to help find a cure or treatment for debilitating neurological conditions like Alzheimer’s, Parkinson’s and Multiple Sclerosis.
Anirudh is of the hope that people will help him “promote the culture of helping others”. The young philanthropist wants to reach out to people and help them in any small way he can, such as simply offering a seat!
Commuters who would like to request a badge can visit facebook.com/Offeryourseatandshowyoucare