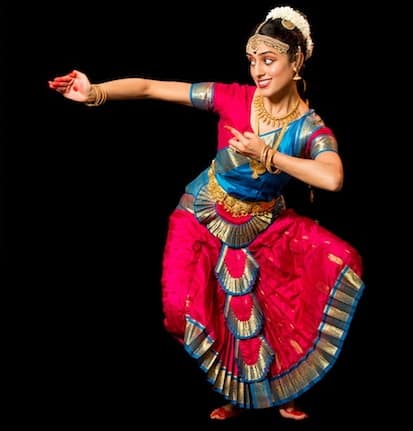 The best performances are those in which the audience is fully absorbed, far too caught up with what the artiste is going to do next to play with the smart-phone or chat to their neighbour. Earlier this month, Minakshi Srinivasan performed her Bharathanatyam arangetram to pin drop silence and undivided attention from an enraptured audience. A student of Sydney guru Nikhila Kiran and her dance academy Natyanivedan, Mina performed her debut solo performance at Sydney Bahai Centre.

Arangetram in Tamil means ‘to ascend the stage’. Ascend she certainly did, taking her audience with her as she told stories punctuated by crisp jathis and with beautifully clean lines. In the past two decades in Sydney, an arangetram has moved away from what it once was, a first time stepping-stone by a young, inexperienced dancer, to dance recitals from dancers who have the maturity and confidence to deliver close to professional performance. Minakshi’s was one such arangetram, her poise, unwavering confidence and ability to connect deeply with the audience making it difficult to differentiate her performance from that of many professional dancers.

Mina’s ability to immerse herself wholly into the character she is portraying ensures that those who are watching can’t help but believe she is the Goddess Andal preparing for her wedding, or Lord Shiva caught up in his cosmic dance, or the ardent devotee of Lord Ganesha. A stand-out piece was one that strayed from the classical theme of gods and goddesses. It was a social parody of sorts, a light exploration of marriage in the bygone era, when girls were married off as children before they had the maturity to handle such a concept. Mina, as the playful, excitable, sulky girl who can barely sit still long enough to take in her mother’s advice on how to interact with her husband-to-be, had the audience at once laughing and tearing up.

The piece de resistance of any Bharathanatyam recital is the Varnam, an extensive arrangement of jathis (abstract dance) and expressive enactments. An important story is always told, and more often than not a god or goddess is showcased. Mina’s Varnam explored the relationship between Lord Shiva and his beloved Goddess Parvathi, as well as the adoration of their devotees. The piece was a spectacular combination of thoughtful choreography by Mrs Kiran and skilful execution by the dancer.

Another captivatingly expressive piece was Bho Shambho, a tribute to Lord Shiva. It is quite a challenge to both choreograph and perform to this piece. The music is so hauntingly beautiful that only a strong dance performance will hold its own, and Mina’s certainly did. It was a remarkably athletic, yet graceful portrayal of the dynamic Lord, with excellent choreography at its foundation.

If the Varnam is the centrepiece of a repertoire, the Thillana is its crowning glory. A final display of the by-then exhausted dancer’s technical finesse, it requires the artiste to somehow conjure up that last bit of energy after presenting the rest of the repertoire. Minakshi performed this piece as if it were the first of the evening, with precise, energetic execution of the complex choreography, crisp footwork, and incredible agility, all the while smiling charmingly.

Music is a main element in dance, and Mina’s performance was accompanied by a delightfully young and talented set of musicians. Anand Sadasivam Dixit lent his dulcet voice, while the seasoned Balaji Jagannadhan played the violin. The mridangam, a prominent instrument in Bharathanatyam, was played skilfully by Janakan Raj, and young Venkatesh Sritharan provided the melodious flute accompaniment. Nattuvangum was delivered by the guru Nikhila Kiran. The MC role was performed by the well-spoken Charishma Kaliyanda and Mina’s brother Krishna Srinivasan.

Minakshi’s performance made it clear that she is an artiste to watch on the dance scene. Her precise, energetic execution of abstract dance as well as her ability to convince and draw in the audience with her artful expressiveness are sure signs that she will continue to excel in this beautiful, challenging art form that is Bharathanatyam. 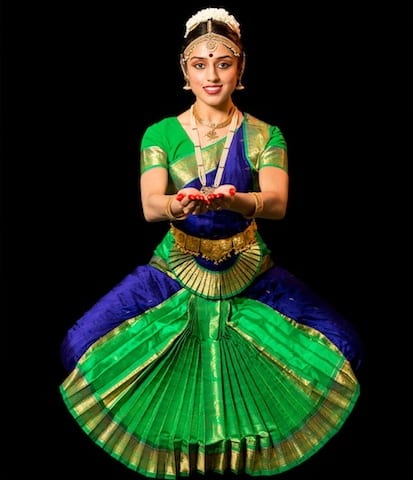 … she is (convincing as) the Goddess Andal preparing for her wedding, or Lord Shiva caught up in his cosmic dance, or an ardent devotee of Lord Ganesha. 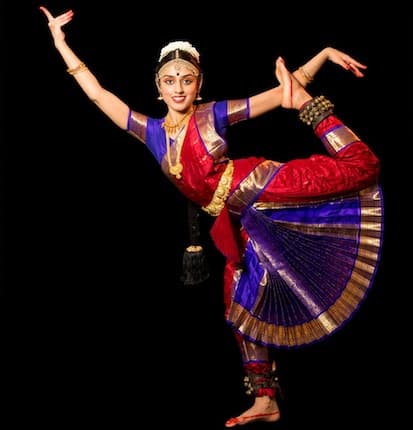