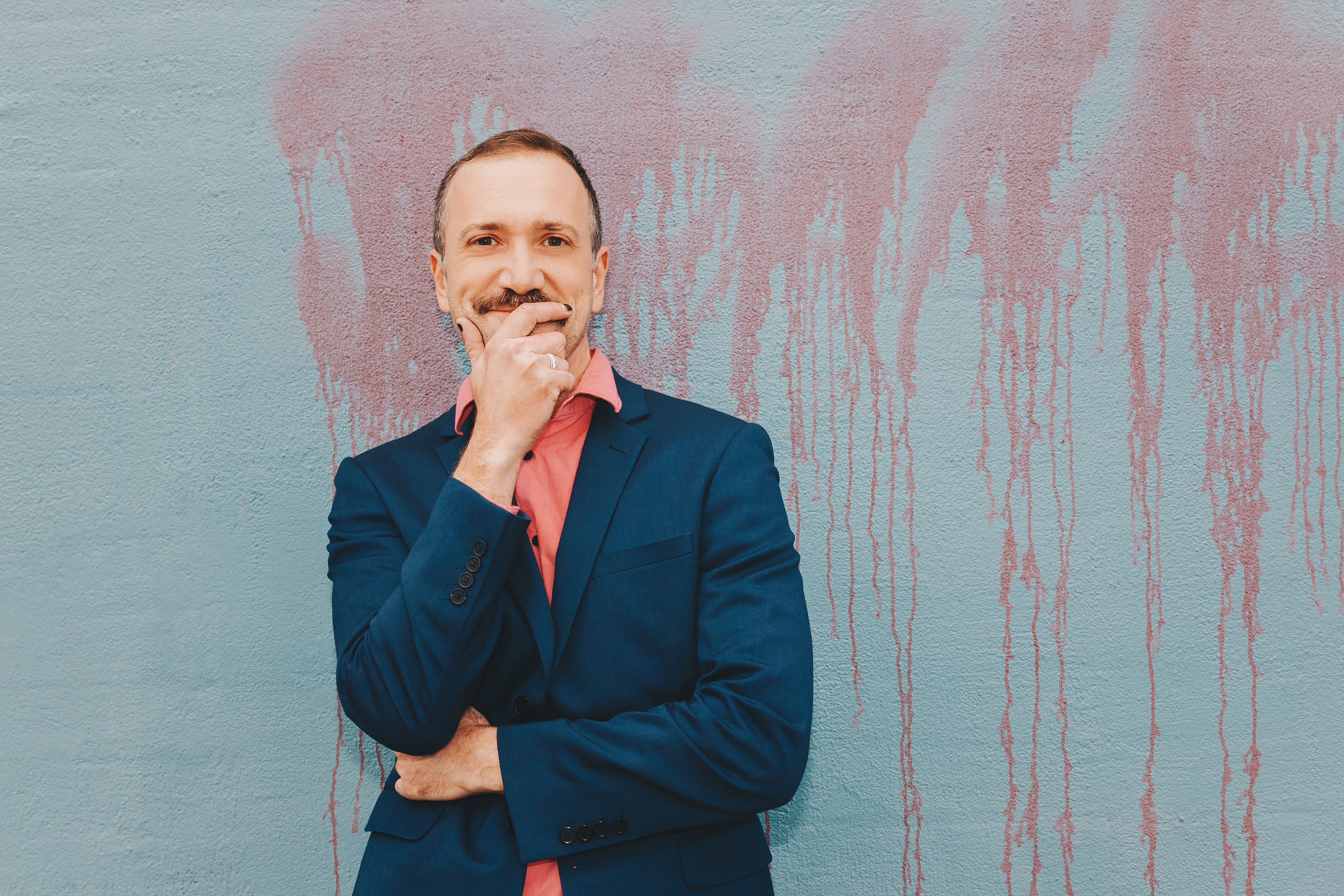 When Ian Woolford feels stressed, he takes a walk in the bush and recites Hindi poetry.
He looks at the Hindi letter ksha and is reminded of a koala.
When prime ministers ScoMo and Modi meet and felicitate each other in their own lingo, his tongue-in-cheek comment is: Har har ScoModi, ghar ghar ScoModi.
It receives much love on Twitter, among his 51,000 followers. Ian Woolford’s love for our matrabhasha, his near native fluency as well as his pedagogical experience have won him many fans not only in Australia but across India as well. 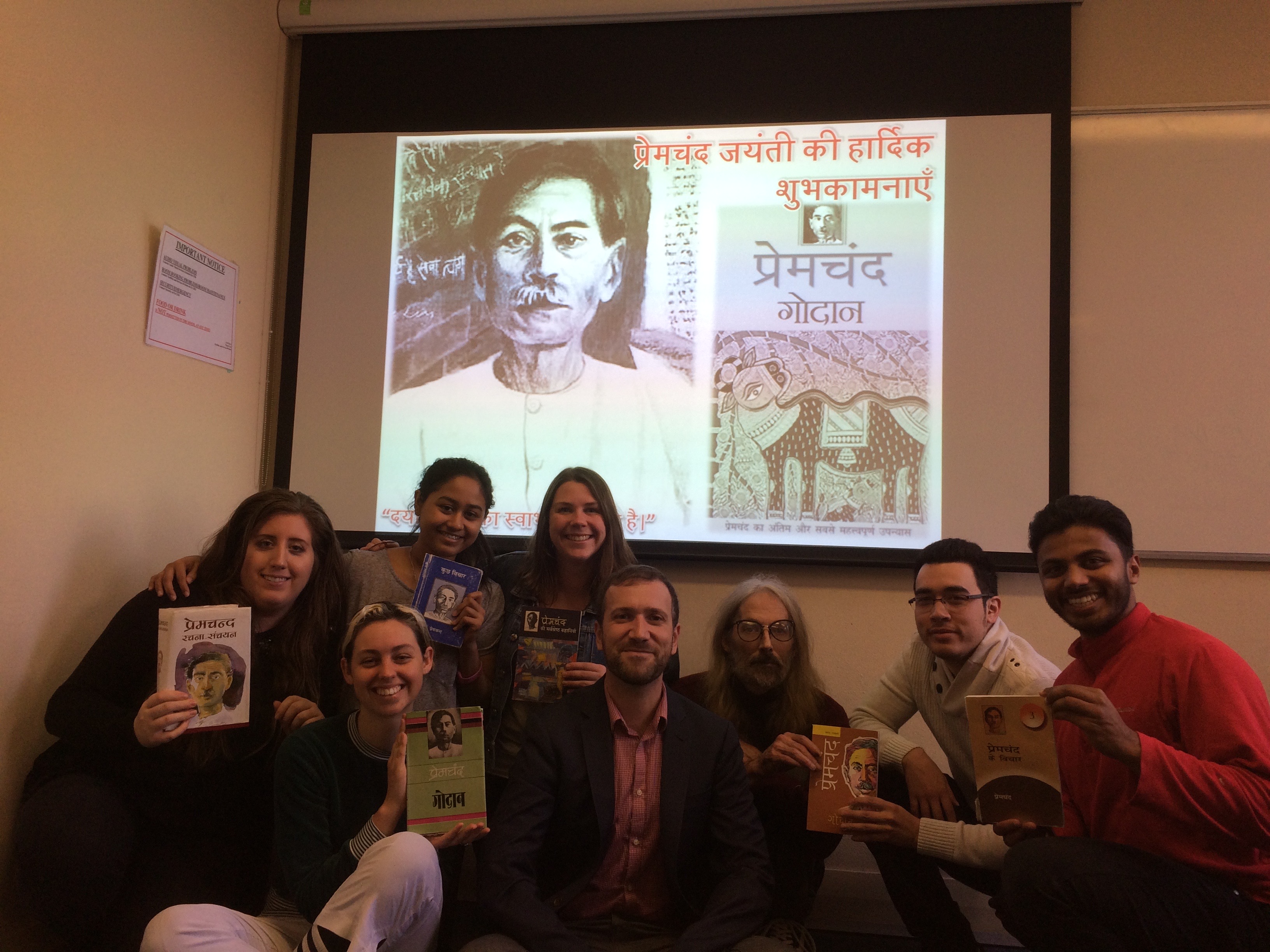 Today, as Hindi lecturer at La Trobe University, the language continues to be at the centre of his life and work. His first exposure came at the early age of nine during a trip to
India with his mum (it was when he picked up his favourite Hindi phrase Koi baat nahin). It led to a lifelong love, not to mention a full-fledged career which saw a PhD and a proliferation of literary works.
“It was a slow coming actually,” Ian revealed to Indian Link, recounting his journey with Hindi. “I was originally at university in America studying music. I was a singer and I thought maybe I would even be a performer. When I traveled to Bihar for a research project on Bihari folk songs, I realised I could combine these two things in my life that I love, and I think that’s when I decided that I want to follow this language path.” 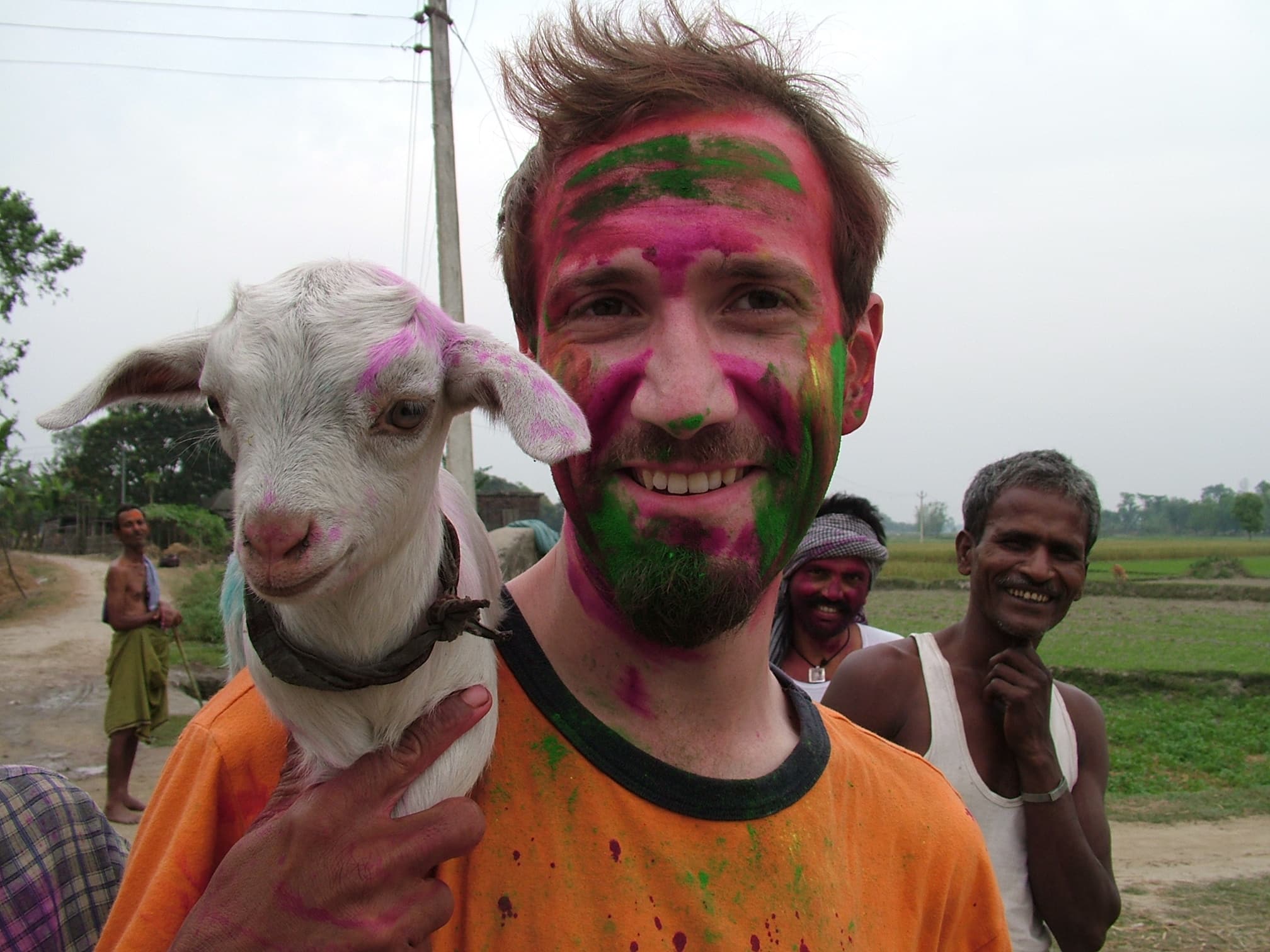 The Bihar sojourn introduced Ian to regional languages like Maithili, Angika and Bhojpuri and he studied the literature, folklore and oral tradition of Eastern Uttar Pradesh and Bihar. It went on to form the basis of his 2012 doctoral dissertation. Ian’s current book project Renu Village, Hindi Literature and North Indian Oral Traditions draws on his fieldwork there, as he learnt to sing Bihari songs with the surviving members of a troupe formed by Hindi writer Phanishwarnath Renu.
Yet it is the legendary Premchand for whom Ian has a special regard. 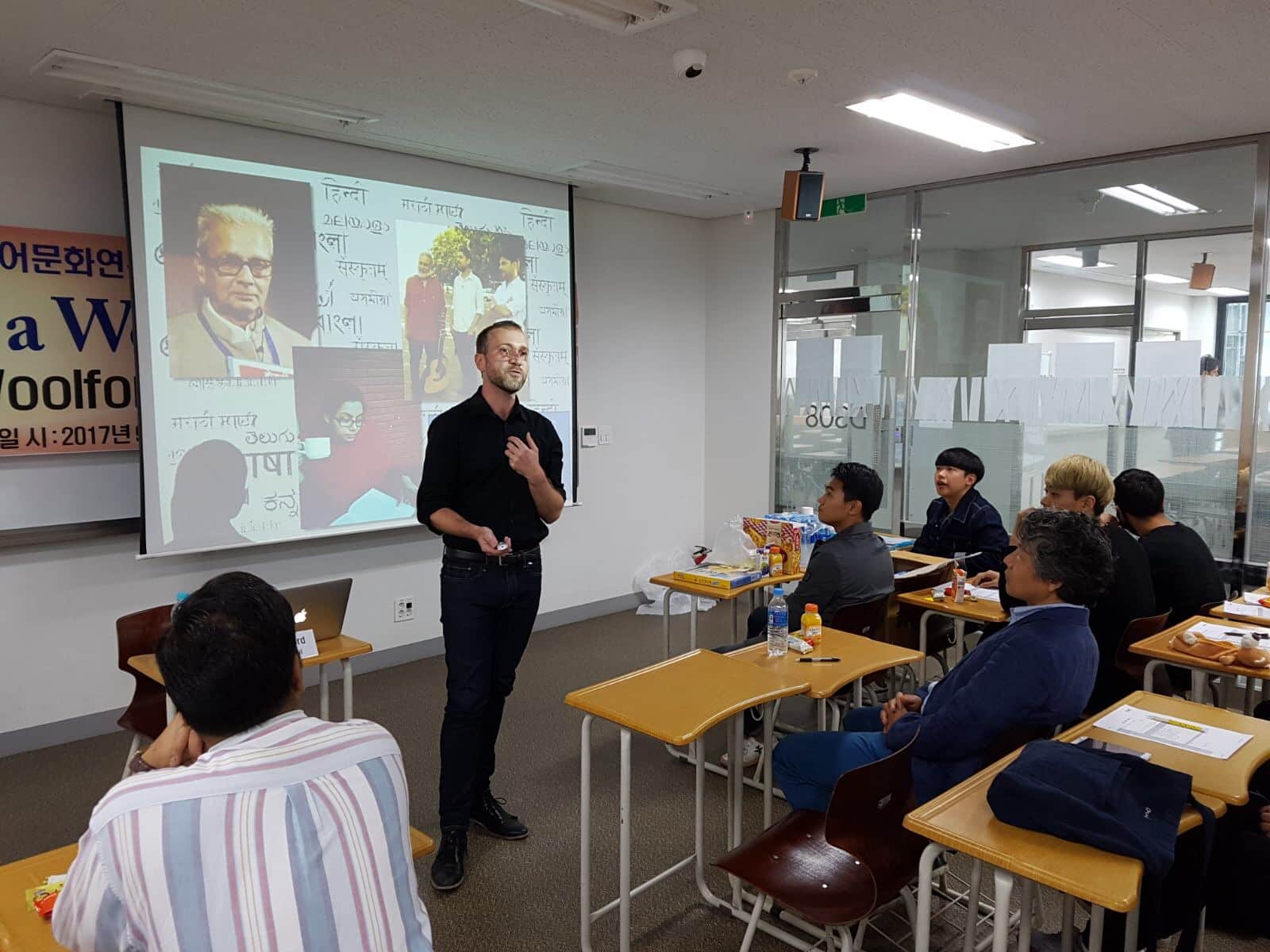 “Premchand’s stories were the first ones that I read in Hindi,” Ian revealed. “I have a sentimental attachment to them as I cut my Hindi literary teeth on his work and it opened up the door to so many other writers both from past and present.”
Among more contemporary writers, Ian lists Jnanpith award winner Krishna Sobti.
“I am fascinated – and stunned – by Krishna Sobti’s work, because it spans so many decades. She passed away recently. She has been a writer from a very long time yet she wrote another novel recently, giving a modern perspective on India, South Asia and on language and the way we use it to create landscapes and autobiography. She is a writer that is very much on my mind.”

As the coordinator of the Hindi Language Program at La Trobe University, one of the few universities in Australia offering Hindi language studies, Ian oversees all levels of Hindi. The
three-year course includes advanced classes in literature, cinema and media. The classes are open to undergrads, majors as well as PhD students “La Trobe has a decade long relationship with India,” Ian described. “We have partnerships with universities in India including research collaboration. We send students there on internships. We also have a partnership with the Indian Film Festival so there is a deep and long-standing partnership with India at many levels.”

“The Hindi language program has been an important part of this,” he continued. “Students can start from complete scratch; students with no background in the language can start from the very beginning by learning the Devnagiri script. With the completion of six semesters they can also go all the way to advanced level.”
“We also have quite a few students from India who may be comfortable, even fluent in the language but are interested in further studies. Maybe they have studied in the English medium and are interested in looking at the literature, at media or maybe look at their own fields through Hindi languages.”

Students, friends and fans got to see him flying the flag for LaTrobe beside a star visitor recently, Indian actor Shah Rukh Khan, on whom the university bestowed a special honour. Ian admitted to followers beforehand that he was excited to be meeting SRK.
“I got to chat with him briefly and I just said, in Hindi, congratulations on your honorary degree,” Ian recalled as he reflected on the packed out event attended by students who
came in droves to catch a glimpse of their favourite Hindi film star. “I also quickly let him know about what we do and the Hindi program at the University. The students learn from
watching scenes from his films so it was quite special to have him here. I think he was quite overwhelmed with the whole day; it must have been quite an experience for him to have a University honour his lifetime achievements in such a way.”

What aspect of Hindi has sustained his own personal interest over time?
“Music and poetry absolutely”, said Ian without hesitation. “I enjoy reading, teaching and thinking about poetry. I start thinking in the language better and suddenly I just become
myself in Hindi, if that makes sense. It’s interesting I did not really enjoy poetry as much when I was reading it in English. However, learning how to read Hindi poetry in my early days when I struggled with it actually made me learn how to enjoy English poetry as well. That’s my main call these days and I try and share that with my students as well. I find that a lot of students would enjoy reading poetry, listening to music and thinking on those terms.” 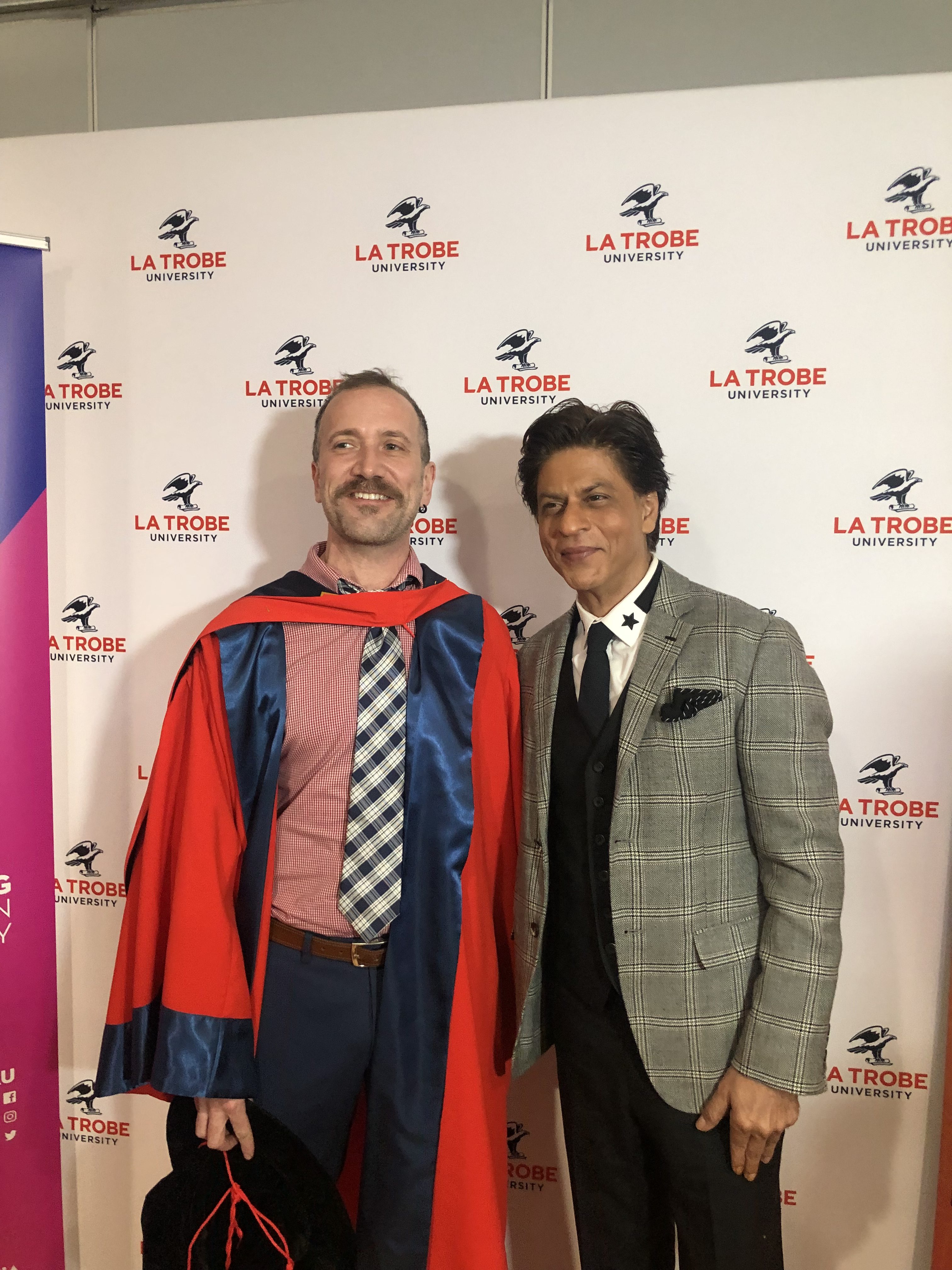 Ian attracts quite a fan following with his video recitations of Hindi poetry on social media.
Waah re Google, #AmritaPritam he tweeted recently, as the daily doodle marked the illustrious Indian writer’s 100th birth anniversary. He followed it up, as expected, with a rendition of his favourite lines from Pritam’s works.
It was but the latest in a series of Twitter tributes to kahaanikars, upanyaaskaars and aalochaks on their janam diwas and punya tithis. Set against that familiar backdrop of his book-lined office, these short tributes are delivered straight from the heart, packing such
feeling in them that you are left not only in awe of the personality he is felicitating, but you also make a mental note that you must go back and read them all over again. It makes you marvel also that new technologies and new media may be helping the cause of languages.
Ian, not surprisingly, is passionate about this idea. “Computers and cyberspace actually give life to languages. With Hindi, one of the most widely spoken languages in the world, a large number of people communicate using the Devnagri script, and that is why technology companies have had to follow suit. Google, Facebook and Twitter are making efforts not necessarily to promote the languages but to ensure that their platforms are more open to Indian languages because they are realizing that people want to use those platforms to communicate. (This is true) not just in Hindi but in all Indian languages.”
Ian’s social media is an affirmation of his ability to engage his digital audience, particularly young students. Indeed, he might well be single-handedly promoting the language and its poetry in Australia.

What is the intent behind his content, we ask him.
“I have no intent other than if I am working on a poem or idea, I let people know what I am doing, and it cheers me on,” he replied with a smile. “I have a huge amount of support and encouragement from people online, in India and around the world. It makes me feel very cheered on that people care about these things and it is important to them.”
It is with similar modesty that Ian makes light of the diverse cultural perspectives in his life, a UK-born American who lives in Australia and works in India.
“You’re right, my story does involve quite a few continents but it is not that unusual in the world especially in a place like Melbourne. It’s not that uncommon even in terms of language in a place like Melbourne as this is a huge diverse city with so many people who speak so many different languages. I like to think that is not much to reconcile, and just like everyone else, I am just living my life.”

About the potential of the language to aid in bilateral ties between Australia and India, Ian is careful not to exclude other languages.
“English is certainly enough to get a foot in the door in terms of trade relations or bilateral relations, but for people-to-people relationships, training in an Indian language is the way to keep the door open to have long standing and deep ties. I think it’s important to stress that all of India’s global languages for example Tamil, Gujarati, Punjabi and more are equally important.”

The same attitude is evident as he talks about the upcoming Hindi Diwas, celebrations for which have taken on increased significance in Australia’s Indian community in recent years.
“Hindi Diwas is a wonderful day to remember that Hindi is one of many great languages in India. If your mother tongue is Hindi or if you are learning it as a second or third language, celebrate it because it’s a beautiful language. But I think Hindi Diwas is a very good day also to remember that all languages in India are beautiful and they have traditions tracking back to generations.”
Thank you, Ian babu, for that last thought.

Up Close and Personal with Ian babu

Beware! Incense smoke may be as bad as cigarette smoke