Home Fiction The god, the bad and the naqli

Letting the sane voice prevail: Adakar’s latest offering is an old classic with a message for contemporary times

With a name like Shri 420, there’s no prizes for guessing what Adakar Theatre Group’s latest production is about. 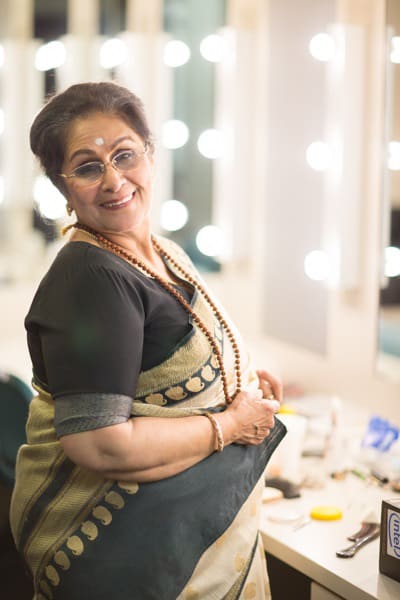 More so, after seeing the likeness of Vipul Vyas in the promotional material as the obviously dhongi sant (charlatan godman).

But true to the original work on which it is based, Moliere’s 1667 classic Tartuffe (The Impostor / The Hypocrite), it is a great vehicle through which to lampoon society for its fanaticism and class divides. It’s a sad indictment on our society that some 400 years on, these truths continue to live on.

Tartuffe is best described as a “social comedy”. A common swindler in the garb of a religious ascetic invades the space of a well-to-do family, hoping to make a getaway not only with their fortune, but also the pretty wife and young adult daughter if he can manage it. The play has been in mainstream theatre in recent times, staged in Melbourne in 2008, in Sydney in 2014 and about to start a season in Brisbane. Its adaptation with modern Australian elements went down well with audiences. 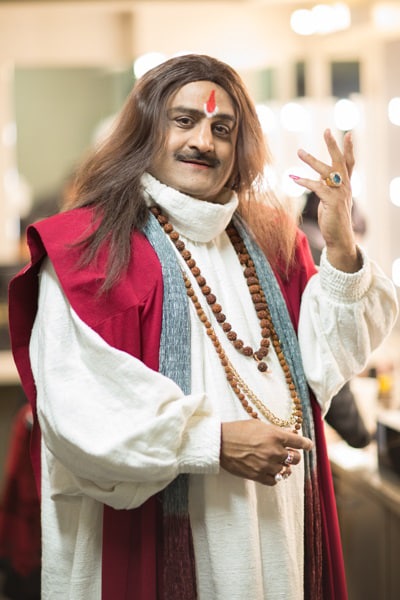 Indian theatre personality Atul Tewari adapted the play for Sydney’s Indian community. (You might remember him from his cameo roles in Three Idiots and PK, and most recently as the suave Indian royal who won the affections of a retired English traveller in the Second Best Exotic Marigold Hotel). Saba Zaidi Abdi, oneof our community’s leading theatre highlights, co-directed with him. Vipul Vyas, one of the best known actors in our community with years of Gujarati stage and TV experience, played the lead. 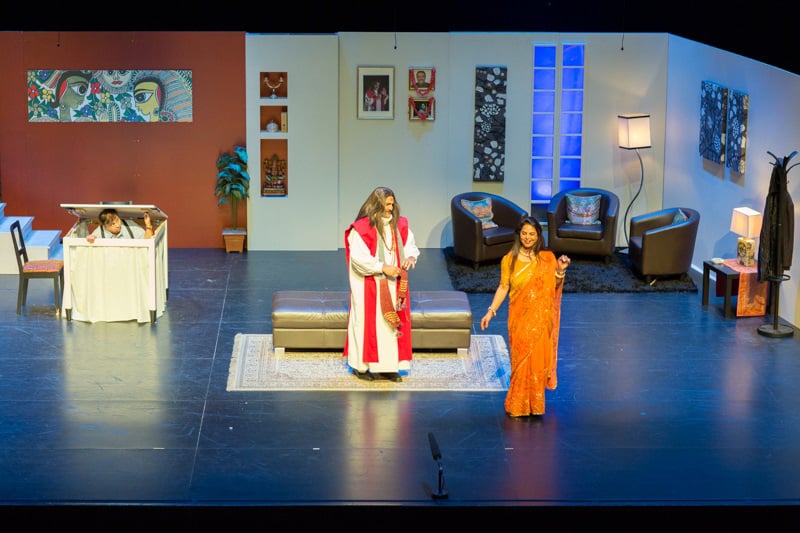 Underlying the plot, are ingeniously incorporated elements of “permanent resident” life here in the Indian community: besides the plush homes and luxury cars, there is 457 “slavery” where the visa holders are at the mercy of their “masters”; a north Indian-south Indian divide (and racism) that continues to exist; the authoritarian roles our mother-figures continue to exert in our families, and the deep-rooted conflicts in our young adult children, their cushy lives notwithstanding. 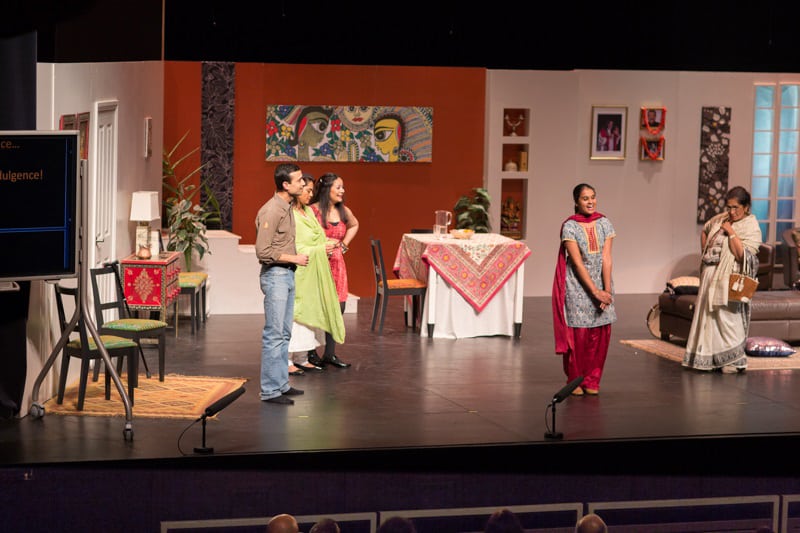 Overtly, the contemporaneity is manifest in the mentions to Shantaram writer Gregory David Roberts, Modi’s Swachch Bharat campaign etc, all much enjoyed by the audience. Indeed, if anything, it was not contemporary enough – perhaps the strange religious extremism playing out in today’s India could have been alluded to? Too much of an ask, maybe, but hey, Moliere’s original intent in lampooning the fanaticism in society would have been upheld! 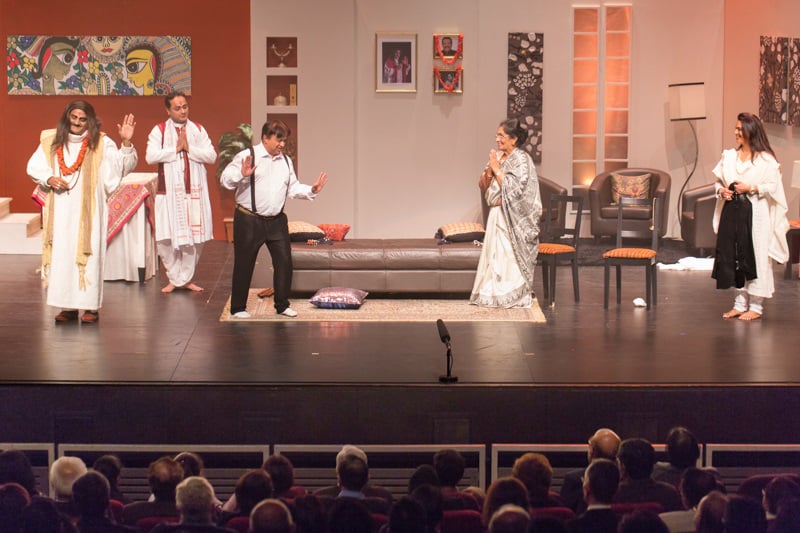 Saba observed to Indian Link later, “Yes what a beautiful parallel it turned out to be for contemporary times.

Our play is a statement against andhavishwaas (superstition), and easy solutions to spirituality. Our objective is not to offend religion, or indeed any particular religion, but to expose forces that are exploiting common people. We need to question and check positions of intolerance. The voice of sanity should be heard.”

The original itself was banned after the clergy and upper classes were offended, but Moliere justified his stance by arguing that the comedic components highlighted rational thought.

Vipul Vyas, perfectly cast as the conman, enjoyed himself thoroughly. Whether caressing his long hair, uttering religious mumb-jumbo, or allowing lust to get the better of him, he shone in the role.

Like a typical god man, he donned outlandish garb in obviously expensive material, revelling in the glamour of red, in his cape as well as in his nail colour.

Saba as the matriarch lit up the stage every time she was on. She nailed those “Mummyji” mannerisms perfectly: striking in her physical presence, overbearing, but loving at the same time, and much adored by her family. This showed off wonderfully in her seemingly simple attire – but in high quality fabrics, mind you – and her beautifully coiffed hair (which in an unfortunate moment of genial embrace at one point, got entangled with the granddaughter’s hair clips, but disaster was avoided).

Nasir Sirguroh as Omi, her son, seemed adept in that middle age phase where life is tiring him: he has marriageable age kids (a huge responsibility in desi culture) and a demanding wife (a huge responsibility in any culture). He would like refuge from his daily hassles – in a dhongi sant maybe, or perhaps in his domineering mum. His get-up showed he still wants to be vain, hair dye and all, even though his tummy bulge is threatening to give up the charade. (Some great wardrobe work, overall). 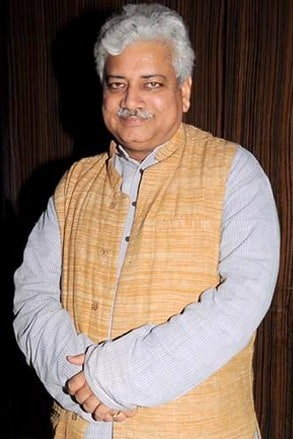 Aparna Vats is well cast as the glamorous trophy wife who is not averse to a bit of nefarious activity to prove her point. Her nifty costume changes were a highlight, as was her perfect balance in the scenes where she had to be flirtatious while simultaneously withdrawing.

The dialogues in rhyme did seem a bit tacky, but that’s the way they were written in the original.

In the end, it was Avantika Tomar, simply brilliant as Deepal the help, who was the crux of it all, and who won the hearts of the audience. With her sense and sensibility, wholesome directness and simple-folk honesty, she was the only person who had her head screwed on right. Hers was the sane voice that sliced through the hypocrisy and fanaticism to unite the feuding lovers, appease the pretentious matriarch, appeal to the tired middle-aged man blind to the positives in his life, and ultimately reveal the scoundrel behind the saintly garb. The sheer energy she showed, running around in gay abandon as various characters chased after her, was testament to the power that clear thinking can wield, in checking the extremist positions that are spreading like a cancer in society and influencing gullible people.

Colour It Pink, Wear It Proud, Let Your Sari Say It...