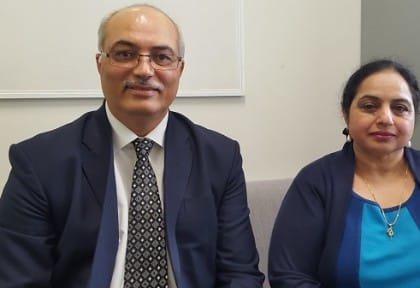 With extensive dietary benefits and medicinal properties, milk has long been regarded as a wholesome food product in many cultures. Deriving from this ancient wisdom, a team of biomedical researchers from Deakin University has achieved a breakthrough in prostate cancer treatment using milk proteins.
The husband and wife partnership of Professor Jagat Kanwar and Dr Rupinder Kanwar, along with two other scientists, have identified that “piggy backing” chemotherapy drug, Doxorubicin (Dox) onto the milk protein lactoferrin creates a combination that is lethal for cancer cells, but without its toxic side effects.
Extensive testing has surpassed expectations and the team is ready to proceed to the clinical stage of trials.
Known for its antimicrobial and immune boosting properties, lactoferrin is an iron-binding protein found in bovine and human milk, making it an important part of the body’s defense against infection. Acting as a “biosensor”, the milk protein moves automatically and efficiently to areas of the body where there is inflammation or tumour formation.

It is the protein’s ability to mop up much needed iron for the growth of microbes (bacteria and parasites) from the site of infection, along with its cancer cell killing power, that have been exploited by the Deakin University scientists.
“Our biggest advantage is that it is not a completely new drug, rather a new way of administering the therapy, therefore it will not take long to pass through clinical trial stage,” the couple told Indian Link. “We are looking at concrete outcomes within the next six years. The results of our research to date show great promise that we could soon develop personalised medication for prostate cancer patients. Everything now hinges on funding prospects.”
The Kanwars’ work has previously benefitted from a substantial grant from the Australia India Strategic Research Fund and the pair is determined to push on in a bid to find an early treatment solution.
“Prostate cancer is one of the few cancers where chemotherapy is not the primary mode of therapy. It is used only when surgery and androgen ablation (hormone suppressant) therapy fails. This is because these particular cancer cells are able to flush out the drug and become resistant to it, while the administered drug continues to kill off the body’s normal cells resulting in a range of side effects,” said Dr Rupinder Kanwar, a senior research fellow with the Deakin Medical School’s Centre for Molecular and Medical Research.
“Earlier Dox used to be the primary and highly effective mode of therapy. However, the increased risk of cardiac arrests due to toxicity to heart, liver, kidneys and brain as well as the chemo-resistance offered by prostate cancer, reduced the use of the drug,” she explained. “When coupled with lactoferrin, however, Doxorubicin can be delivered directly into the nucleus of prostate cancer cells and will kill the cells as well as drug resistant cancer stem cells, without any side effects.”
Detrimental side effects from the long-term use of cancer medication, and multi-drug resistance, have been the key focus of researchers lately. Commonly prescribed cancer drug Dox is particularly notorious for its ability to induce chemo-resistance in tumours along with cardiotoxicity (damage to heart muscle) and requires effective strategies to manage this. Several drug conjugates have been developed by researchers to enhance their functionality.
“Bovine lactoferrin is currently attracting attention in clinics for its anti-cancer properties and proven safety profile. The iron-binding milk glycoprotein has been investigated extensively by our laboratory and others for its anti-inflammatory, immuno-modulatory, anti-microbial, anti-oxidant and proven anti-cancer properties,” explained Professor Jagat, who is group leader and laboratory head of Nanomedicine, Laboratory of Immunology and Molecular Biomedical Research at Deakin’s School of Medicine.

Earlier Prof. Jagat and Dr Rupinder found that gut enzymes do not digest lactoferrin, when fully saturated with iron, and can be given as smart nano-capsules.
“This latest study builds on our previous work, whereby to target toxicity and drug resistance we coupled the Dox with lactoferrin. It was then fed to a particular breed of mice that naturally develop prostate cancer. Rather than being pumped out by the cancer cells, Dox was taken to these cells by lactoferrin through its receptors which then stays in the nucleus of the cancer cells to perform its lethal action.”
Within 96 hours, all the cancer cells were dead.
“As an added benefit, there was an increase in red blood cells, white blood cells and haemoglobin indicating that the immune system had also been boosted. Interestingly, this combination not only targeted the prostate tumour development in mice, it also led to repair of the Dox induced damage to vital organs including heart and brain,” Prof. Jagat said.
The India-trained researchers worked in New Zealand for several years, before moving to Deakin School of Medicine.
Dr Rupinder has expertise in the fields of nanomedicine and biomedicine, while Professor Kanwar’s research has focused on pathophysiology and devising new treatments, mainly for cancer and chronic inflammatory diseases.
The pair is continually working to discover novel and safe targeted nanomedicine based nano-nutraceuticals for cancers, autoimmune disorders and inflammatory diseases.
Their most recent research has been published in the high impact, international journal Scientific Reports and the exciting discovery has already received wide interest from the research fraternity, including Harvard Medical School, with cancer patients keen to transition to the human trials phase.
Professor and Dr Kanwar’s single biggest strength is their ability to work together as a husband and wife research team, constantly collaborating and bouncing new ideas off each other.