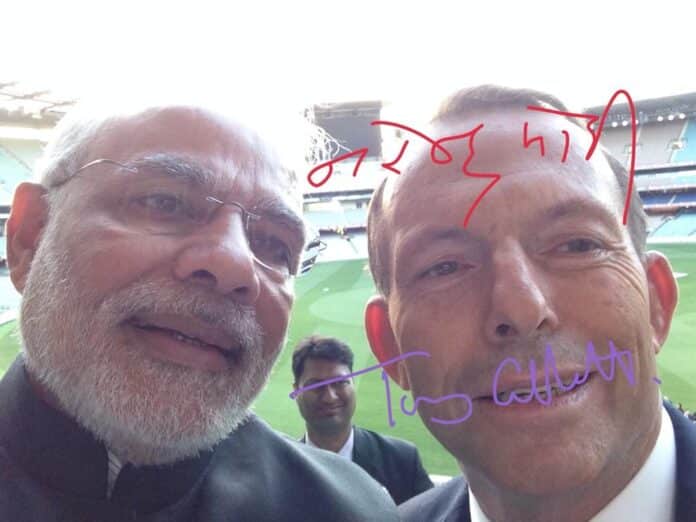 While certain mentions had been made of Indian Prime Minister Narendra Modi and Australian Prime Minister Tony Abbott’s burgeoning ‘bromance’, it was an autographed selfie the pair took at the MCG that indicated the true closeness of their friendship.

PM Modi has shown a particular understanding of how to work social media from the beginning. Throughout his election campaign, Modi and his team at the Bharatiya Janata Party worked his profile on his blogs, Google Hangouts, Facebook and Twitter accounts. His victory message in May was the most retweeted post in Indian history.

After a tour of the Melbourne Cricket Ground, PM Modi tweeted the selfie along with the words, “With my friend @TonyAbbottMHR at the MCG.”

The PM also tweeted, “People asked me isn’t it too soon to visit Australia after @TonyAbbottMHR just visited. I said I can’t say no to my friend Tony.”

The Modi mania experience was not restricted to crowds of adoring fans lining the streets of the state capitals. His Australian visit dominated Twitter, with the hashtag #ModiinAus topping the trends for several days.

Since embarking on his landmark tours of the US and Australia, Narendra Modi’s global popularity has exploded. To give some perspective, in April Modi had over 12 million fans. This swelled to over 18 million by July and 21.8 million in September. In just two months, these numbers have ballooned to 25.1 million Facebook followers. A recent picture of Modi meeting Obama and Australian Prime Minister Tony Abbott at the G20 summit garnered more than 450,000 likes.

The tech-savvy prime minister has also been active on other social media sites including Pinterest, Tumblr and LinkedIn. He and officials from the Ministry of External Affairs have also been busy sharing photos on Flickr.

During the 25th ASEAN Summit recently, Prime Minister Modi made his Instagram debut. After sharing his first post, he received a staggering 30,000 likes and currently has more than 136,000 followers. All this despite not following a single other account!

Since coming to power in May, Modi has continued to use direct channels of communication with the public, enhancing his image as a common ‘man of the people’.

Prime Minister Modi launched the ‘Talk to Me’ initiative and the Digital India program as other tools for listening to the wants and needs of his constituents. He has been making use of social media to showcase his government’s initiatives including Swachh Bharat.
Connections to the internet have spread across India, and according to estimates from the Internet and Mobile Association of India, there are more than 80 million current users. Though this is only a small percentage of the country’s population, a large portion of these users are the youth PM Modi is targeting with a number of his policies.

This was evident in yet another selfie the Prime Minister took with high school students during his tour of the University of Queensland.

Prime Minister Modi has the second largest number of Facebook followers in the world after US President Barack Obama, and is the third-most followed world leader on Twitter after President Obama and Pope Francis.

As cyber expert Pawan Duggal told DNA India, “This single fact tells you how significant India has become, but more significantly it’s also a salute and salutation to the eccentric understanding of this distinguished statesman who understands, lives and breathes social media and the internet.”