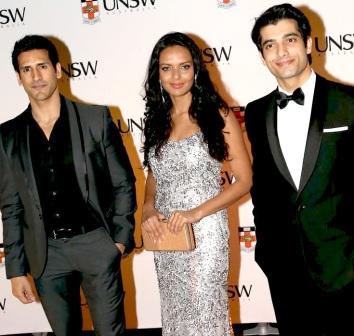 The film was mostly shot at the University of New South Wales during 2011, and features other popular Sydney locations such as Bondi Beach and Central Station.

The film is the story of Meghaa Banerjee, a small town girl from West Bengal who moves to Sydney after winning a prestigious scholarship to UNSW. Complications arise as her old and new cultures collide and love begins to take over.

Meghaa’s story is drawn from Chakravorty’s own experiences and memories of his time as a student in Sydney.

“Filming here has been really nostalgic,” he said. “It reminds me of my old college days back in Sydney and returning here is almost like reliving the whole college experience all over again”.

Prateek is the grandson of popular filmmaker Pramod Chakravorty and he wrote, directed and starred in From Sydney with Love. The film is a comeback for the family banner Pramod Films, which also produced films such as Deedar (1992) and Barood (1998).

From Sydney with Love is typically a vibrant and musical Bollywood-style experience. The timely, well-produced music score and sound effects add to the emotional intensity of the melodramatic scenes.

However, the more Western aspects of the film, enhanced by the youthful college setting, are emphasised by clichés and cheesy lines like, “Dude, I seriously owe you one,” verbalised by Prateek Chakravorty’s character Raj Bakshi.

The film premiered at the Ritchie Theatre at UNSW on August 1, and the cast of Bidita Bag, Sharad Malholtra and Karan Sagoo, flew in from India for the occasion.

Sadly, due to a family emergency Chakravorty was unable to make it to the premiere. Anupam Sharma, head of production in Australia for the film and himself a UNSW alumnus, described Chakravorty as a “visionary and a wonderful person”.

Chakravorty is hoping that the movie can change the belief that Australia is unsafe for Indian students, an impression created in 2009 when assaults against Indian students here were deemed by the media as being ‘racially motivated’. This resulted in protests and a significant decline in the number of Indian students coming to Australia.

In its aftermath, Bollywood began reconsidering shooting films in Australia, and acclaimed star Amitabh Bachchan turned down an honorary doctorate from the Queensland University of Technology, which he subsequently accepted in October 2011.

Indian actor Aamir Khan had also stated, “It is most disturbing to hear about racist attacks on Indians living in Australia…the frequency and seriousness of such attacks, I think, calls for an extraordinary reaction from the Australian authorities.”

The leading lady of From Sydney With Love Bidita Bag (who plays Meghaa Banerjee) described the events of 2009 as ‘unfortunate incidents’, and said she had no bad experiences while filming in Sydney.

“Aussies are nice. Without their help and support this film would not have been possible,” she said.

“The film will do good things to help bridge the two cultures as emotions are the same everywhere,” she added, claiming that the film would relate to Indians and non-Indians alike.

As for filming at UNSW the cast and crew had nothing but praise.

“It’s been so welcoming, so warm,” said actor Karan Sagoo. “Not just the weather, the people have been great, and the university has been so hospitable.  I would love to come back and shoot here as much as possible to be honest. It’s been an absolutely fantastic journey, like wonderland”.

Ms Bag, who left university to start modelling, said that filming at UNSW made her want to start studying again and was impressed with the university facilities and infrastructure.

Pro-Vice Chancellor of UNSW, Ms Jennie Lang, has been a big supporter of the film throughout its production. “The synchronisation that occurred between a university as a centre of learning and a wonderful production team of this calibre has just been phenomenal,” she said.

In his short speech at the film’s premiere, cast member Sharad Malhotra took the opportunity to thank the Australian media and tourism, followed by an address by Ms Lang who stated that UNSW was proud of its close links with India, and that it was a “dream come true to welcome the stars and crew here”.

“Should there be a sequel, you’re welcome back anytime,” she added with a smile.

From Sydney With Love is an enjoyable film that will hopefully change India’s perspective positively on the way their students are being treated in Sydney.

“I think Indians are pretty excited about coming to a different country and studying in Australia. At first they might be a little apprehensive, but slowly and steadily, like me, they get used to the environment and at the end, they can become more Australian than Indian,” stated Chakravorty.

The fire still burns… at 80