Chilli jam adds a touch of spice and sweetness to warm up your winter, writes DHANYA SAMUEL 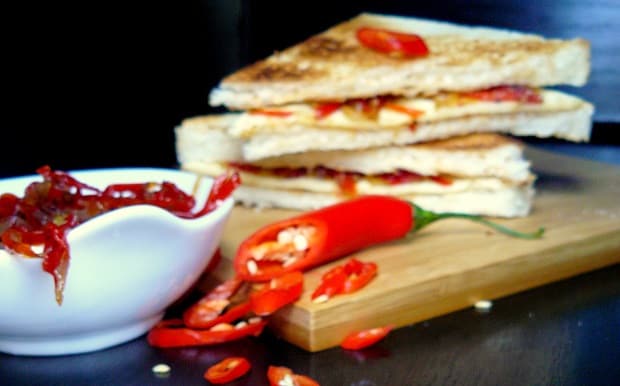 The practice of making jams is an ancient one, dating back as early as the 16th century. There is a lot of historical debate about the origin of this process, but it is believed to have started in the Middle East, where cane sugar grows naturally. Sugar was first discovered in Asia, but there is no documented evidence of jam-making from this region. It was the Arab traders who introduced jams to European society and since then, the popularity of this sweet preserve has risen to become the multi-billion dollar market that it is today.

It is believed that the idea behind making a jam or any fruit preserve began with a real need to preserve food. Before the advent of refrigeration, this was a key method to keep fruit and some vegetables from spoiling.

What is a jam? As per the culinary definition, a jam is prepared by using the pulp and juice of a whole fruit (crushed or chopped) which is then heated with water and sugar. This process releases pectin, which gives the jam its jelly-like consistency, and the high concentration of sugar acts as the preservative. These days, artificial pectin is added to jams to boost its commercial value which detracts the natural taste and sweetness of the fruit, making it unhealthy for our body in the long run.

Jams were considered to be a royal delicacy in early European society and were often prepared using the choicest of fruit grown in the royal garden or orchards. Today, it has become the common man’s food and you can find so many different varieties of jams on our supermarket aisles made with almost every kind or combination of fruit.

Chilli jam – sounds quite retro, doesn’t it? And probably the last ingredient that we might think of using to make a jam. Though this may sound quite contemporary and a modern twist to traditional fruit jam, it is not so. Chilli jam is actually a traditional preparation of South Africa, especially from the Cape Town region.

When you hear the word ‘chilli’, all you can think of is fiery hotness burning your tongue. But chilli jam is a revelation, a burst of flavours for those who have never experienced it before. A jam which truly captures the real flavour and texture of chilli, without its fiery heat.

Both the red and green varieties can be used to prepare this jam, though the red one gives a more delectable appearance when made into a jam. It is important that you use only the big chilli varieties since these have relatively less heat. The smaller ones usually pack a punch and can land you in some serious ‘hot’ trouble!

Pick out ripe yet firm chillies to make this jam. The pith and seeds need not be removed as this imparts just the right amount of heat, making this jam a spicy sweet one. But if you are a little wary or doubtful about the heat quotient, then take off the pith and seeds. You could either slice the chillies into really thin juliennes or finely chop them up – the difference is only in the appearance of the end product.

Here’s how you make this quirky South African jam:

A pinch of salt

Add all the ingredients to a pan and bring to boil. Reduce heat and cook till the sugary water begins to thicken and forms a syrup coating the chillies and shallots. Cool and store in an airtight container. Can be refrigerated for upto a month.

Traditionally, the chilli jam is served as an accompaniment to grilled meats or fried fish. But it is a wonderful accompaniment to many Indian starters like potato tikkis, vegetable cutlets, pakoras and other snacks. It is amazing when spread inside a grilled cheese sandwich; a sweeter spin to the Indian chilli cheese toast!