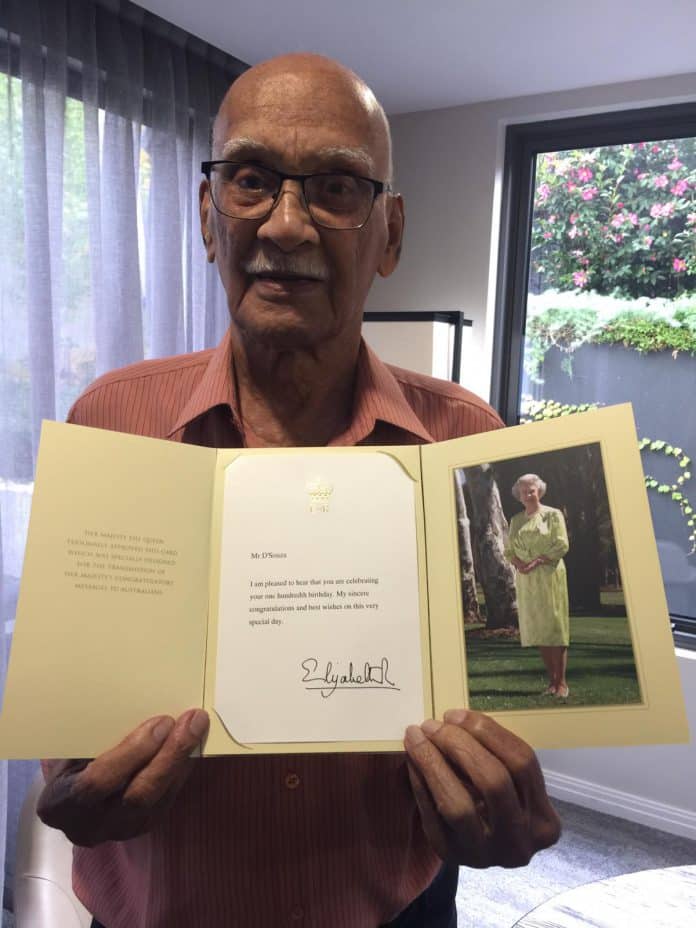 Goan at heart but Aussie in spirit, Melbourne’s Ligorio Trindade D’Souza celebrated a milestone birthday this past week. Bringing in his 100th birthday on 30 May, he celebrated with the hallmark contentment, gratitude and enjoyment of his long and eventful life.

While the milestone ideally would have been cause for celebration, restrictions on account of the pandemic meant the birthday boy cut his cake in the presence of a limited number of family members and a representative of the Goan Overseas Association Community in Victoria.

On the secret of his longevity, Ligorio said, “Most probably, I inherited good genes, and made an effort to keep fit. Till today, I exercise, play pool and keep my mind active with games like word search. I’m blessed, and thank god every day.”

His daughter Lorna Menezes said, “Dad was determined to reach this milestone and managed to achieve this with good health.”

She added, “Ligorio has been a loyal husband, nurturing father, comforting and loving grandfather and a good friend to many. He is a positive person with a zest for life. He has a curious mind, an adventurous spirit and is an inspiration to many around him.”

Ligorio migrated to Australia in 1993, a year after the death of his wife Valdemira. In 2000, he became an Australian citizen at the age of 80.

Hailing from Quitula-Aldona in North Goa, India, Ligorio was the youngest of four brothers and two sisters. When he was 13 years old, his priest uncle, Monsignor Luis Caetano D’Souza, persuaded his father to send Ligorio to the seminary to become a priest. He was sent to a boarding house at the St Rita of Cassia Chapel in Carona-Aldona, where he learnt music and Portuguese for two years, before proceeding to the Rachol Seminary in South Goa, where he learnt Latin for three years.

After his father took ill and never recovered, Ligorio told his mother he had no vocation for priesthood, and she accepted his decision to leave the seminary.

He then joined St Thomas Boys High School in Aldona, matriculating in English and Portuguese as a second language. Ligorio was a sportsman, winning trophies and medals for running, high jump, badminton, cycling, and football.

During World War II, he joined the Indian Navy and worked in Pakistan for a year. In 1948, he moved to East Africa and worked as an accountant for the British Police Headquarters in Nairobi for 24 years.

In the early ‘70s, Ligorio returned to Goa with his family and kept busy with social work, immediately joining the Aldona Panchayat (village council). A decade later, he was elected Sarpanch (village council head) of Aldona. He contributed to the community by helping improve roads, providing electricity, water and gas supply to the village. Till date, he is fondly remembered by residents of Aldona.

Ligorio’s family consider him a multi-talented man, still sewing using the good old Singer machine, along with being skilled in woodwork and carpentry. He also loves dancing and music and plays the harmonica.

He has been blessed with four children, eight grand-children and five great-grand-children. His daughters Lorraine Almeida and Lorna Menezes live in Melbourne while his daughter Lynette Jones lives in Perth. His oldest son Leslie D’Souza resides in the UK.

Australia has been his home for almost thirty years, but Ligorio does miss Aldona sometimes.

The centenarian’s fond memories of Goa are the “susegad life” (a Goan term for a content life), enjoying fruits like mangos and jackfruits that were once planted by his wife.