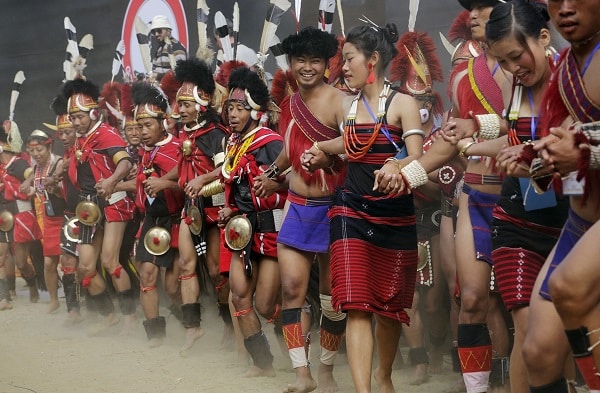 Hornbill festival
The state of Nagaland is home to several tribes who have their separate festivals revolving around agriculture. However, since the year 2000, the government began organising Hornbill festival, named after the bird that is important in tribal culture, to foster inter-tribal interaction. The result is a spectacular display of arts and crafts, dance, music, food and culture and traditional games of the tribes. The festivaltakes place in state capital Kohima from 1 December to 10 December each year.

BEST TIME TO VISIT: First week of December
STAY: There are hotels and camps in and around Kohima but they are booked full during the festival. Plan in advance.
GETTING THERE: The state’s biggest city Dimapur has flights from Kolkata. From Dimapur, Kohima is 2.5 hours by road.
Sulafest
The vineyards of Nashik in Maharashtra play host to a three-day music, food and wine extravaganza in February each year. With a line-up of international artists, a host of wine and spirit brands, gourmet food, and fashion labels, the festival is a hit among youngsters. Glamping (‘glamorous camping’ in luxurious tents) is very popular at the festival too.

BEST TIME TO VISIT: First weekend of February
STAY: Camping at festival venue, hotels of all budgets in Nashik
GETTING THERE: The nearest airport is Mumbai, about 180km away. Nashik is also a prominent railway station.
Bhagoria
In Madhya Pradesh’s remote Alirajpur and Jhabua districts, around the festival of Holi, a festival takes place in which elopement of young couples is not only tolerated, but celebrated. While most couples have known each other in the past, it is here that they ‘go public’ with their relationship.

The men generally make the first move, applying gulal, a bright pink colour, to the girl’s cheeks. If she responds likewise, the two elope and, by tradition, their match is later approved by their respective families. The festival also doubles up as a fair, with trinkets, jewellery, toys and other knick-knacks for sale. The women in chunky silver jewellery and matching saris make for a photographer’s delight.
BEST TIME TO VISIT: Around the festival of Holi that generally falls during late February and mid-March.
STAY: The MP government sets up a camping village with Swiss tents near the festival venue.
GETTING THERE: About 250km by road from Indore.
Camel festival
While the camel fair at Pushkar in Rajasthan is quite well-known, the one at Bikaner is equally exciting. One of the most interesting activities during the two-day festival is the camel fur cutting competition. The desert animal’s hair is artistically trimmed so that it appears to have intricate designs and patterns on its body. Other activities include tug-of-war competitions between Indians and ‘foreigners’, a turban-tying contest and cultural dances by folk artists.
BEST TIME TO VISIT: January to February
STAY: Several private hotels, heritage properties and government-run hotels available.
GETTING THERE: Jodhpur airport is about 250km away. Bikaner is also well-connected to many major cities by rail.