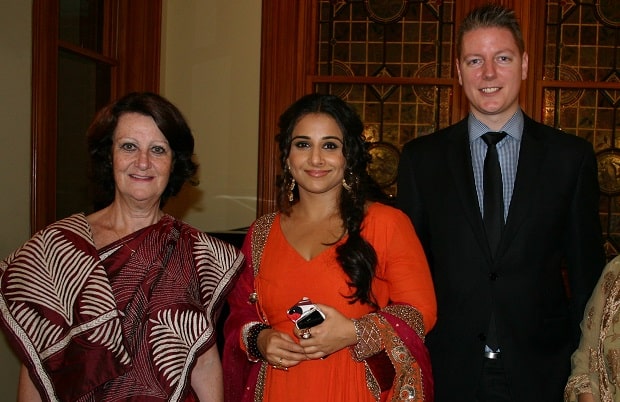 Any visit to the historical Raheen Mansion in Kew in Melbourne is about the whole experience. The Italianate style, heritage-listed building that belongs to billionaires Jean and Anthony Pratt, has a wealth of character. From the imposing gates and lush manicured lawns through to the ritzy décor and tastefully done interior, the mansion has been the venue of choice for many of Melbourne’s high society parties. It was the perfect location to host a Bollywood themed party to celebrate the launch of the 2014 programme of the Indian Film Festival in Melbourne (IFFM).

Louise Asher, Minister for Innovation, Minister for Tourism and Major Events, and Minister for Employment and Trade attended the dinner event in a beautifully handcrafted sari presented to her by festival director Mitu Bhowmick Lange. Many other guests also made an effort to sport Indian Bollywood style clothing and looked magnificent, thanks to all the colours and bling. Former Victorian Premier Ted Baillieu cut an imposing figure in his orange gold silk kurta teamed up unusually with a natty tie. Orange was also the choice for Vidya Balan, Bollywood’s reigning actress, who was the guest of honour at the event. The rest of the invitees comprised of a select group of festival sponsors, supporters, organisers and media representatives.

Ms Bhowmick Lange invited Vidya Balan, brand ambassador of the festival to join her on stage to announce the program. Gracious as ever, Ms Balan thanked the hosts for their hospitality and complimented Minister Asher and other guests on their Indian attire, particularly Ted Baillieu who she claimed could be ‘the Amitabh Bachchan of Melbourne’. “Amitabh Bachchan will be here in Melbourne soon, perhaps we could make both of you stand together to see who is taller”, she said with characteristic chutzpah.

Ms Balan continued to share the various highlights that festival attendees could look forward to, including details of the inaugural awards presentation scheduled to be held in May. She claimed that she had a love affair with Melbourne that made her want to come back to visit this ‘wonderful city full of warm people’ again and again.

The entertainment for the night was in the form of some beautifully rendered songs by Australian actor Simon Gleason and his wife actress Natalie O’Donnell.

John Molloy, festival co-director, officially thanked the guests for their contribution towards making this festival happen. Whilst listing the main sponsors, John also took the opportunity to thank Visy and the Pratts for their generosity in hosting this event. He then went on to acknowledge all the Indian community leaders and the media sponsors for their ongoing support in promoting the festival. According to John, one of the great things about this festival is that both sides of the politics come to enjoy and celebrate the festival together with everyone.

As the executive chairman of Visy, one of Australia’s largest privately owned companies, Anthony Pratt is an avid supporter of the festival and is also on the advisory board along with Miss Manika Jain, Consul General of India in Melbourne. The festival advisory board also boasts names like Ronnie Screwala, founder of UTV group; Vikramjit Roy head of publicity at Sony Pictures Entertainment, India; actress Simi Garewal; and Pamela Chopra, wife of iconic film maker the late Yash Chopra. With over 40 films on offer, several renowned festival guests including legendary actor Amitabh Bachchan, an accomplished jury and many festival favourites on offer, this year’s IFFM promises to be quite an exciting event. See you there! 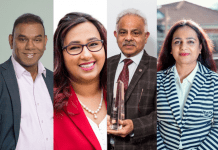